You Are Here: Home → 2014 → December → 26 → Opponents list reasons why MRT-LRT fares should go down instead

Opponents list reasons why MRT-LRT fares should go down instead

Since 2011, protests have held back the planned fare hike.

With some protesters wearing “evil” Santa Claus masks depicting President Benigno “Noynoy” Aquino III, they denounced the “sneaky” timing of the hike. Since 2011, protests have held back the planned fare hike. In mainstream media reports Monday night, Transportation Secretary Emilio Abaya was quoted as defending the hike, citing how the fares should have been hiked as per contract, and citing also the high cost of government “subsidy” on the said public utility.

But commuter groups led by the RILES Laan Para sa Sambayanan said the fares in Abaya’s cited privatization contract are unjustifiably high — and it became that high due to corruption and cronyism. All of these should have been investigated first, they said. 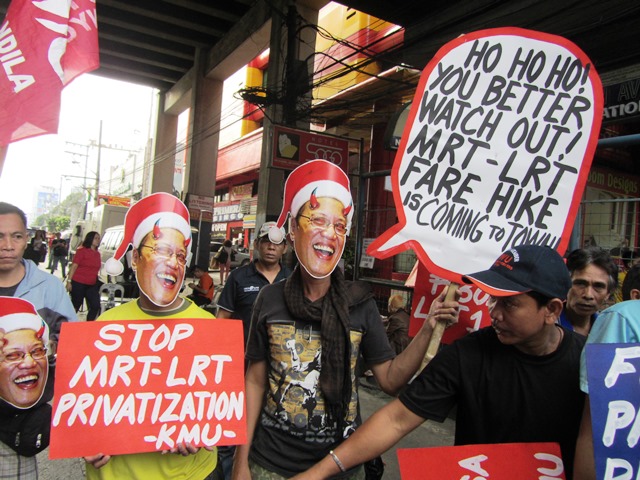 The following are the reasons cited by critics why the train fare hike on January 4th in 2015 should be opposed:

1. The 50-percent to 85-percent hike is not for supposed improvement or running of the trains, but for “the insatiable greed of big capitalists and the Aquino government’s subservience to these big capitalists,” said Sammy Malunes, spokesman of RILES Network and long-time unionist from LRT-1.

How is that so?

Based from data in the LRTA’s website, the Train Riders Network said the LRT-1 and LRT-2 are making more than enough to cover both the trains’ expenses (1.24 and 1.00 farebox ratio respectively). A farebox ratio that is more than one means it could finance both its maintenance and operations. The said train lines also generate income from advertising, foodstalls and ATM machines located in its stations.

That means any increase in its fares would be additional profit. Or, if the private group controlling the trains would use it to finance the planned train expansion, that means it is the public who are financing the expansion, yet the profit from it would go to the private group. Sammy Malunes said during their protest at MRT North Avenue stations that “we are being fried with our own fat.”

The MRT operations, meanwhile, became problematic as revealed in its frequent mishaps. These are largely blamed on the build-lease-transfer (BLT) agreement between private group Metro Rail Transit Corp. Ltd. (MRT Corp. as its Philippine subsidiary), which reneged on paying loans incurred to build the trains when it failed to get the P60 ($1.34) “sweetheart-contract’s” promised train fare.

The government stepped in and paid the loans, but the private group continued to claim ownership of the MRT and thus continue to earn profits and other perks guaranteed them under the BLT agreement.

The LRT was built also mainly through foreign loans but without a private group acquiring it in the name of the Philippine government. The LRT was thus run for decades more for public service and loan repayment in mind, than for profit. It has successfully repaid its loans and has even expanded to build LRT-2. But the next phases of its planned expansion as well as the operation of current systems were privatized this year by the Aquino government.

Because of these privatization deals in the MRT and LRT, the train systems were expected not only to repay its loans, pay interests and pay for its maintenance, but also to generate no less than 15-percent profit. The earnings from non-rail services would also no longer go to the government but to the private operators.

2. ‘The planned MRT-LRT fare hike is not only sneaky, unjustifiable and irrational, it shows the leaning of Aquino administration toward big capitalists at the expense of ordinary citizens.’
Bayan Muna, Anakpawis, Riles Network, Bayan, Train Riders Network, Piston and the Kilusang Mayo Uno said in statements sent to media that the sudden decision by the DOTC to increase fares displayed the anti-people drive of the government’s neo-liberal policies.

Neoliberalism gave rise to various ways of privatizing public utilities and services, such as the public-private partnership, and deregulation of the oil and power industries. These, in turn, combine to transform important public services into cushy profit-oriented businesses, as based on record, the privatization and deregulation deals covering it came with guaranteed profits and public subsidies.

When the government rolled back the jeepney fares recently, it cited the reduced cost of petroleum, even as prices of most basic commodities have yet to go down. Still, only the low-income earning jeepney drivers were made to roll back their fares.

“Why not the other mass transportation systems as well,” San Mateo asked. He said the electricity being used to run MRT and LRT is also derived from petroleum.

In fact, in the face of the close to 50 percent plunge in international crude oil prices, Metro rail fare rates, as well as prices of local petroleum products, “must be rolled back more substantially, together with electricity rates, air and sea fare, long-haul bus fares and freight rates,” the Communist Party of the Philippines said in a statement.

As of today, the corresponding bus ride from end-to-end station of MRT (North Avenue to Taft-Pasay) cost P30 ($0.67), a price which bus drivers and conductors interviewed by Bulatlat.com said is largely due to the petroleum products being consumed by the bus.

The revolutionary group CPP suggested in a statement that rather than allowing the train fare hike to be implemented, the Filipino people “should unite, stand up and oppose the planned increases in metro rail rates, demand a rollback and an improvement in its service and safety.”

The commuters’ group who picketed the North Avenue station of MRT also asked commuters, as they were about to ride the train, to help in the campaign to demand the abrogation of the “lopsided” public-private contract with the Ayalas and Pangilinans.

The contract gives to the business group the relatively well-maintained LRT-1 and LRT-2 and allowed them to start building on government-funded and guaranteed loans the planned expansion to Cavite.

Malunes, in a speech during their protest at North Avenue MRT station, decried the “unwillingness” of the Aquino government to make the Camposes, Ayalas and Sobrepeñas pay for the foreign loans they reneged on paying, and which was paid for the government who since then have increased their “subsidy” on MRT. The “subsidy” here, Malunes said, represents the funds that the cronies benefited from at the expense of the riding public.

The reason the government could spend public funds to build, operate and subsidize mass transportation and communication systems is because these are considered part of its responsibility especially if it wanted to stimulate the economy. With better transportation and communications, people and goods can move around easily to where they need to be.
Secretary Abaya has merely cited the P60 ($1.34) fare that was written in the MRT Build-Lease-Transfer contract – an amount still under question — and the needed funds for rehabilitating and expanding the train system.

Bayan Muna representatives said billions of pesos have been allocated in the national budget to finance the trains’ requirement for expansion, improvement and rehabilitation, among others.
“The 2015 and the supplemental budget provided for MRT and LRT at least P11.11 billion ($249 milion), consisting of LRT1 North Extension (Common Station) – P 770 million ($17.2 M), the LRT2 West Extension- P200 million ($4.5 M), the MRT3 Rehabilitation and Capacity Expansion-P2.57 billion ($57.5 M), the Repair/ Rehabilitation of LRT Lines 1and 2- P977.7 million ($21.4 M),” Rep. Colmenares said. He asked, “With the announced fare hike, where will all these money go including the double entries for the LRT 1 and 2 rehabilitation?”