“Our political prisoners are like the Cuban 5, slapped and imprisoned for trumped-up charges. We appeal for the Pope’s intervention.”

On Dec. 17, 2014, three of the remaining Cuban 5 who were imprisoned by U.S. authorities for 16 years — Gerardo Hernandez, Ramon Labañino, and Antonio Guerrero – had been freed. Their release has been regarded as a significant step in the normalization of US-Cuban relations. The two others — Rene Gonzales and Fernando Gonzales – were released earlier. The Guardian reported that Pope Francis and the Vatican played key roles in the reopening of diplomatic relations between the two nations.

In a press conference, Jan. 5, Cristina Palabay of human rights alliance Karapatan, said, “Human rights activists in the Philippines find resonance in the Pope’s statements. Our political prisoners are like the Cuban 5, slapped and imprisoned for trumped-up charges. We appeal for the Pope’s intervention.”

According to Karapatan, there are 491 political prisoners in the country, of whom 220 were arrested under the Aquino administration.

Speaking at the press conference, Niki Gamara, daughter of Renante Gamara, a consultant of the National Democratic Front of the Philippines (NDFP), called on Pope Francis to hear their message to help free all political prisoners and seek justice for the victims of human rights violations. 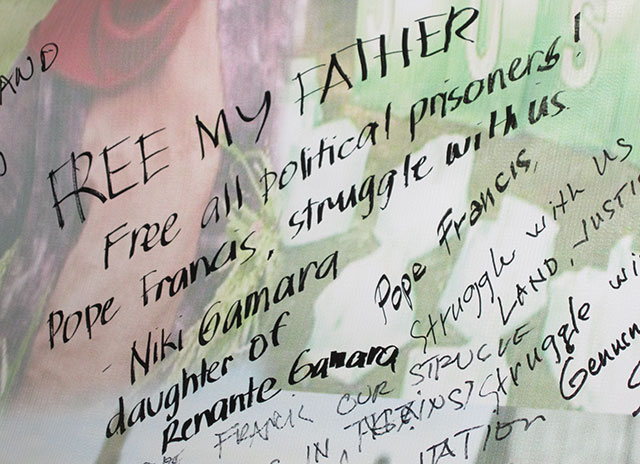 Niki said she wrote a letter to the Pope in 2013 and sent him a postcard last December. His father has been detained since April 2012.

From her prison cell, Andrea Rosal who lost her newborn while in detention wrote to the Pope, “I appeal for your help. I believe you can do something for my release… I wish you consider my plea.”

Charges of kidnapping and murder filed against Rosal have been dismissed in July 2014 but another murder charge remains pending with a local court.

“My innocent child bore the effects of the trumped-up charges against me. My detention is unjust. I am not guilty of the charges against me even as I continue to suffer the loss of my child,” Rosal said further in her letter.

A volunteer teacher who has been detained for nearly five years also appealed to Pope Francis. In her letter to the Pope, Rhea Pareja said, “I believe that we are one in the cause of justice for the poor people. With this, I appeal for your help for the release of all political prisoners in the Philippines.”

Pareja, 26, was a volunteer teacher in the Adult Literacy Program of the ACT when she was arrested on March 15, 2010 in Mulanay, Quezon. She said the charges of illegal possession of firearms and explosives against her are all fabricated.

Marita Cadano and Rowena Salonga’s sons were arrested on Aug. 9, 2014 and are languishing in a jail in San Jose, Nueva Ecija. The military claims the two are members of the New People’s Army (NPA).