Pope Francis: Pope of the poor

Jorge Mario Bergoglio, the Archbishop of Buenos Aires, was elected by the conclave to the throne of St. Peter on March 13, 2013. He chose the name Pope Francis.

Pope Francis, 78, is the first Jesuit and the first non-European to head the Catholic hierarchy.

The Pope, at his first press conference in Vatican, explained why he named himself after the 13th century St. Francis of Assisi. In a report, the pope described St. Francis of Assisi, as “the man of the poor. The man of peace. The man who loved and cared for creation and in this moment we don’t have such a great relationship with the creator. The man who gives us this spirit of peace, the poor man who wanted a poor church.”

“How I would like a church that is poor and for the poor,” the Pope was quoted as saying in a report.

He is the son of middle-class Italian immigrants and a trained chemist.

As then cardinal of Buenos Aires, Bergoglio chose the motto “Miserando Atque Eligendo,” or “Lowly but Chosen” for his archdiocese. He is known for living a simple life.

“He’s a very simple man. He’s very austere. And also, I think he’s an intelligent man and someone who is very good at communicating,” Leandro Pastor, a friend of the Pope was quoted as saying.

Pope Francis has preferred staying at the Domus Sanctae Marthae, the Vatican guesthouse instead of the papal apartments in the Apostolic Palace. When he was still a cardinal, he took public transportation around the city, and cooked his own meals.

“His own simplicity of life, I think will be a great example to people,” Cardinal Cormac Murphy O’Connor, the former archbishop of Westminister, said.

On his birthday last year, the Pope gave sleeping bags to the homeless. He also ordered the construction of showers inside the public restrooms next to St. Peter’s Basilica.

The Pope is straightforward in his criticisms. On his Christmas message to the Roman Curia, Pope Francis minced no words in enumerating what he calls as “ailments” afflicting the heads and other senior officials of the departments of the Roman Curia.

Pope Francis said, “Sometimes, [officials of the Curia] feel themselves ‘lords of the manor’ superior to everyone and everything, forgetting that the spirit, which should animate them in their lives of service to the universal Church, is one of humility and generosity, especially in view of the fact that none of us will live forever on this earth.”

“We live in the most unequal part of the world, which has grown the most yet reduced misery the least. The unjust distribution of goods persists, creating a situation of social sin that cries out to Heaven and limits the possibilities of a fuller life for so many of our brothers,” he said.

On the other hand, Pope Francis was criticized for his “silence” during the brutal military dictatorship in Argentina. According to a report, the Catholic church and Bergoglio, then head of the Jesuit order from 1973 to 1979, have been accused of a complicit silence during the “dirty war” carried out by the junta that ruled Argentina from 1976 to 1983. At that time, 13, 000 to 30,000 people died or disappeared.

Pope Francis has denied the accusation and said he protected priests and others quietly, New Yorker reported.

On Poverty and Inequality 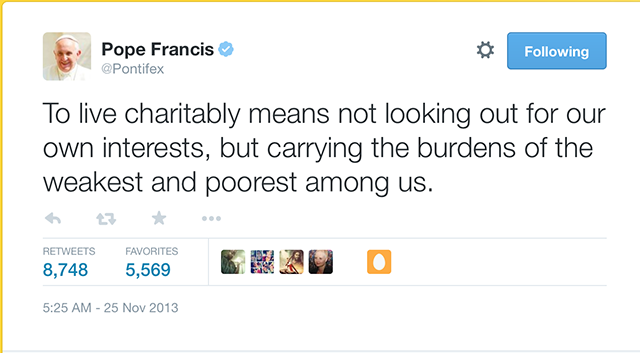 “We live in the most unequal part of the world, which has grown the most yet reduced misery the least. The unjust distribution of goods persists, creating a situation of social sin that cries out to Heaven and limits the possibilities of a fuller life for so many of our brothers.”

“Today, and it breaks my heart to say it, finding a homeless person who has died of cold, is not news. Today, the news is scandals, that is news, but the many children who don’t have food – that’s not news. This is grave. We can’t rest easy while things are this way.”?

Church of the Poor 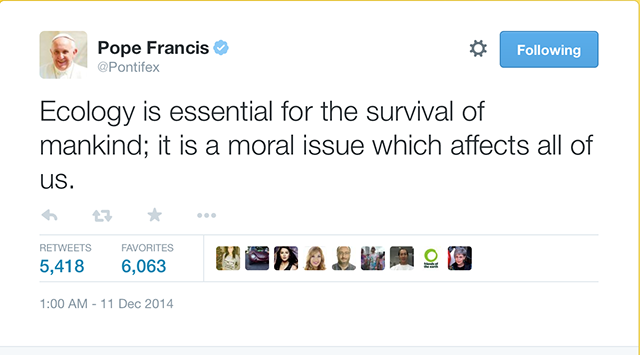 “The Church, all of us should divest ourselves of worldliness. Worldliness is a murderer because it kills souls, kills people, kills the Church.”

“Without divesting ourselves, we would become pastry-shop Christians, like beautiful cakes and sweet things but not real Christians.”

On Money and Capitalism

“We have created new idols. The worship of the golden calf of old (cf. Ex 32:15-34) has found a new and heartless image in the cult of money and the dictatorship of an economy which is faceless and lacking any truly humane goal.

“While the income of a minority is increasing exponentially, that of the majority is crumbling. This imbalance results from ideologies which uphold the absolute autonomy of markets and financial speculation, and thus deny the right of control to States, which are themselves charged with providing for the common good. A new, invisible and at times virtual, tyranny is established, one which unilaterally and irremediably imposes its own laws and rules.

“Moreover, indebtedness and credit distance countries from their real economy and citizens from their real buying power. Added to this, as if it were needed, is widespread corruption and selfish fiscal evasion which have taken on worldwide dimensions. The will to power and of possession has become limitless.”

“Just as the commandment ‘Thou shalt not kill’ sets a clear limit in order to safeguard the value of human life, today we also have to say ‘thou shalt not’ to an economy of exclusion and inequality. Such an economy kills