“We hope the simple gesture of welcoming Pope Francis with a humble ribbon, in contrast to the layers of expensive and expansive print banners by businesses and politicians, would help fellow Filipinos understand the spirit of the Pope’s visit.” – People Surge

MANILA — From downtown Tacloban to Palo town in Leyte this morning, Yolanda survivors covered in mud festooned the gates of establishments lining the city’s avenues with white ribbons. The ribbons, they said, symbolize the Pope’s solidarity with the poor. Operators of the business establishments have welcomed the white ribbon and others even asked for more.

By lunchtime of the day Pope Francis is set to arrive in the Philippines, the People’s Committee to Welcome the Pope in Eastern Visayas (People’s Welcome – EV) has covered the streets of Tacloban City with white ribbons and posters with quotes from the pontiff’s social teachings on homes and establishments.

In a statement, Dr. Efleda Bautista, convener of People’s Welcome – EV, said the white ribbons are public reminders of the real purpose of Pope Francis’ visit, which is the Holy Father’s solidarity with their plight as survivors of Yolanda and subsequent typhoon disasters. 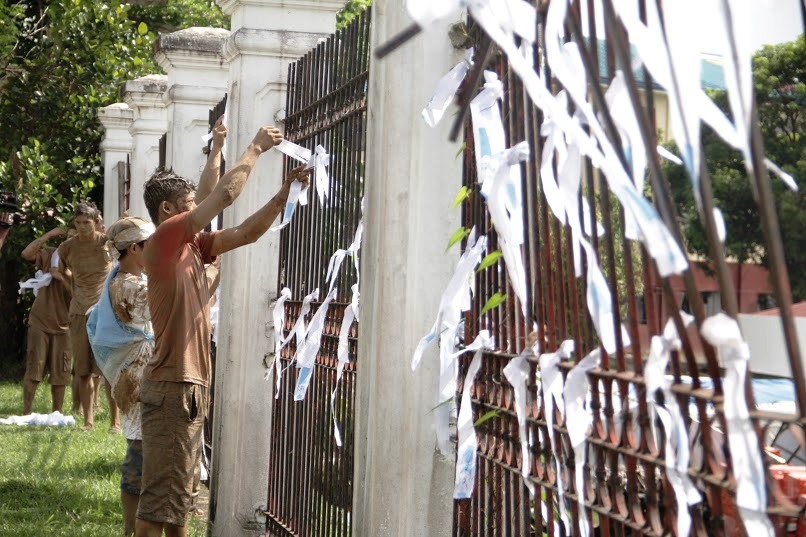 The doctor leader of People Surge alliance of survivors explained the ribbons’ white color represents purity — “that of the Pope and the truth that we intend to raise and that the Holy Father himself seeks in his journey to Typhoon Yolanda ground zero.”

She added that it also represents simplicity, “as in Pope Francis’ choice to wear simple white robes instead of the lavish ones, as symbolic of his giving voice to the cry of the poor.”

Announcements from Vatican have emphasized that the Pope prefers to have as many person to person contacts in his visit, that he wishes to meet and greet poor Filipinos at their current state. But the tight security being put up by the Aquino government could prevent the people, including those living in villages he would pass by, from even getting a glimpse of the Pope.

Yesterday, the Palo, Leyte office of non-government organization EVRAP (Eastern Visayas Rural Assistance Program) which has been repeatedly threatened by the military, was visited again by Lt. Col. Rodrigo Ilustrisimo who questioned the staff about their planned activities concerning the papal visit. Ilustrisimo told them the soldiers will conduct another meeting or training seminar with the NGO’s partner municipal organizations in the coming weeks. The military has previously announced its intention to take over the peasant support projects of the non-government agency.

As much as 10,000 police and military are reportedly deployed now to guard the places to be visited by the pope.

The Region 8 office of the Department of Public Works and Highways hastily released P75 million for the construction and all of the roads the pope will travel in while in the Visayas. Sources in Tacloban told Bulatlat.com the locals are comparing the quick fund release to the time the DPWH did not release any in the aftermath of Yolanda.

“When Pope Francis arrives, we may not have the opportunity to raise our concerns over the continuing injustices we experience under the current administration, as he will be met instead by thousands upon thousands of police, soldiers and wooden barriers,” said Dr. Elfleda Bautista.

While the government preparations for the papal visit appears centered on enforcing strict security and seemingly sanitizing the routes to be taken by the Pope – Metro Manila and Eastern Visayas are now even more militarized as a result – the religious and various groups of disaster survivors converged to pray for his safe arrival in the Philippines and to lead in reminding the people of the Pope’s social teachings. Among others, the Pope has recently issued strong statements against a ‘profit-centered economy,’ a message that gives hopes to progressive organizations fighting “illegal, immoral hikes” and profit-driven rehabilitation of disaster-hit areas. 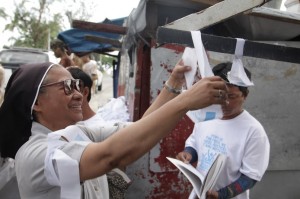 The Sisters Association in Mindanao (SAMIN) and the indigenous Lumad leaders from KALUMARAN have joined the People Surge – Eastern Visayas in praying for the Pope’s safe arrival. The Mindanao sisters and their indigenous laity said they journeyed to Tacloban City hoping to learn and practice the Pope’s social teachings among Yolanda survivors and also to raise concerns of the Mindanao people to the Pope.

The Sisters Association in Mindanao (SAMIN) and the indigenous Lumad leaders from KALUMARAN also joined the People Surge in lighting white candles during a prayer activity at the San Jose Junction for the Pope’s safe arrival.

Because of the strict security and cordoned off activities surrounding the Pope, the Yolanda survivors took to the blogosphere to seek the Pope’s audience. With solidarity groups from Canada, they launched an Open Letter Video campaign at http://www.dearpope.org, featuring a 14-minute short documentary on the lives of Yolanda survivors demanding justice from negligent authorities, and appealing to Pope Francis through his @pontifex twitter account.

The Yolanda survivors’ alliance estimates that given the “unnecessary highly militarized security surrounding his travel,” the visit will only show the Pope the proverbial tip of the iceberg.

“We hope the simple gesture of welcoming Pope Francis with a humble ribbon, in contrast to the layers of expensive and expansive print banners by businesses and politicians, would help fellow Filipinos understand the spirit of the Pope’s visit,” Bautista said. The alliance also hopes to air their appeal for the Pope to support their continuing struggle for social, environmental, and climate justice through social media. They noted that the Pope is known for being a tech-savvy.

The joint groups of People Surge, SAMIN and Kalumaran are set to hold on January 16 their #DearPope People’s Welcome – EV version of a Gathering of the Poor at the Balyuan Amphitheatre. This, they said, is their preparation for a meaningful welcome to the Holy Father.