Child workers get a chance to go back to school

MANILA – Thin and frail Geraldine Aboy, Pitang to friends, may not look like it, but she has been working at sugarcane plantations in Don Carlos, Bukidnon since she was six years old. She stopped schooling after grade 4 to join her father as a sakada. Now 14, she is tearfully happy to have a chance to continue her primary schooling through an EU-funded project of the Ecumenical Institute of Labor Education and Research (EILER).


A teardrop-shaped scar in her right temple is one silent testimony of her working history. Asked how she got it, she recalled how, one time, when she was eight, a long, thin, steel agricultural tool they call “ispading” glanced off the shiny hard skin of sugarcane and its tip hit her near the eye.

It was not life-threatening but it had been bloody. Her father who was working with her at the time did a rudimentary first aid. There were no medicines or real first aid kit in plantations. She had to immediately go back to work after only a few minutes’ break; the wound in her temple still bleeding.

Pitang is the second eldest child in a brood of seven, of whom two had died, and the eldest is considered a special child.

At first, she said, “When I was still a child, my father owned land. The family was tilling it until war came, and we were driven off our farm.”

It happened not just to her family but to others, too. The government relocated them to San Nicolas, a village in Don Carlos, Bukidnon. In the area are sugarcane plantations where most of its nearly 4,500 residents work and earn a living.

“With our land grabbed from us, we no longer have a source of livelihood,” Pitang said.

Her father became a farmworker in the sugarcane plantation; her mother started accepting sewing work at home, and Pitang, being the second eldest child (the first is a special child) soon joined her father in being a sakada (work groups camping where there are farm jobs).

Pitang gives a face to childworkers in plantations and mines surveyed by EILER last year. Although government research in cooperation with the International Labor Organization pegged the estimated number of child laborers in the Philippines at 5.5 million, a representative of ILO told the EILER forum this week the survey they conducted to arrive at this finding had not been designed to provide a deeper look or a clearer picture of the specific conditions of child workers.

EILER conducted surveys of households in poor communities with reported incidences of child labor. In a sharing of their survey result last Wednesday at the Bantayog ng Mga Bayani in Quezon City, EILER shared the ages and wages, kinds of work and working condition, push and pull factors that influence the family decision for some or all of their children to work for pay and eventually stop going to school.

Child workers in a sugarcane plantation typically do weeding, harvesting, and fetching of water. Most child laborers in plantations, as surveyed by EILER, were 11 to 17 years old, girls started working at age 9 or 10. They work six days a week. Nearly half of those surveyed work 10 hours, a quarter work 9 hours, the rest work from 8 to 12 hours.

Pitang said from their village, there were five girls in the sakada and she was one of them. EILER’s study shows that for every girl, there were four boys working in plantations.

They would wake up early, take a bath with water they fetched from a nearby spring, prepare rice, eat, then go to work, said Pitang.

When her father’s kidney problem got worse, Pitang had to brave being in the labor camp without her father. Even when she felt lonely and afraid, she said, she had to forge ahead because with her father stricken ill, she had to be the breadwinner at the time.

Last year, “from our (labor) camp, we learned from an uncle that a group is coming to send us to school,” Pitang shared. 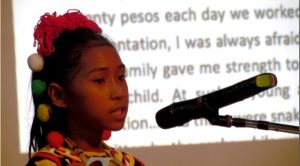 She immediately went to where they were enlisting child workers to register her name even if she had not yet told her parents about it.

When her mother got wind of it, she was approving. She just told Pitang: “It’s a good thing you got yourself enrolled, then.”

She started schooling last month courtesy of the EU-funded back to school project by EILER with local partners. In hopes to bring child workers back to school, EILER and their local partner organizations have built DepEd-approved alternative learning schools and trained teachers near where the childworkers live. In Pitang’s case, the said school is in San Nicolas, Bukidnon, serving plantation workers like her.

Pitang told Bulatlat.com that many children wanted to go to this school where she is going with her fellow child workers. The school materials are free, and they are provided with food.

Now, she works only on Saturdays, when there are no classes.

She is about to take a test from the Department of Education’s ALS (Alternative Learning System) where, if she passes it, she will be allowed to start high school already.

Pitang hopes others like her will continue to receive such an opportunity to resume studying and worry less about how they will feed themselves as they study.