Witness on Palparan: ‘ I hate him, he tortured me’

“He threatened me, that is also a form of torture.”

“I hate him. He tortured me,” Manalo replied.

Manalo’s testimony is one of the bases for the filing of two counts of kidnapping and serious illegal detention on the enforced disappearance of the two University of the Philippines students Sherlyn Cadapan and Karen Empeno.

In the hearing today, Feb. 23, Manalo once again recounted his ordeal, how Palparan himself had faced him and how he encountered the two disappeared students. He was cross-examined by Palparan’s lawyer Narzal Mallares. 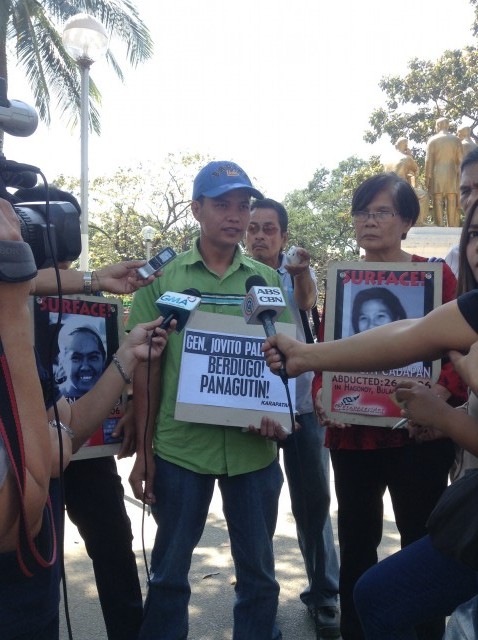 Mallares attempted to clarify to Manalo that it was not Palparan who directly tortured him.

“When he threatened me and instructed me to talk to my parents, that is also a form of torture,” Manalo retaliated.

Manalo said during his direct examination on Feb. 16 that Palparan, in a basketball court in Sapang village in Bulacan in June 2006, told him to instruct his parents not to attend hearings or meet those who are working with human rights group Karapatan. The retired general also handed him P1,500 and instructed him to give his salary from his “new boss” to his parents.

During his cross-examination, he said he did not see if Palparan was among those who hit him because he was blindfolded. He said that he also did not hear Palparan order his men to beat him up.

But the order, he added, was coming from a person revered by soldiers as “Lolo” (grandfather).

On several instances, Judge Teodora Gonzales asked Mallares to get to the point and avoid dwelling on small details.

Mallares, during the hearing, spent several minutes trying to figure out if Manalo, prior to his abduction, owned either a radio or television set. Later he explained that he wanted to know if Manalo, by any chance, had seen Palparan in the news.

Manalo replied that he had seen Palparan on the news prior to meeting him in person.

Mallares also dwelled on electric posts, if the lights were working and whether or not the lightbulbs were facing the streets or the basketball court.

After the hearing, Mallares told the media that Manalo was “coached” and that he has difficulties remembering dates involved in his testimony.

In one instance, Mallares noted that Manalo “pondered for five seconds” before answering the question on what time he met the retired general in Sapang village in San Miguel, Bulacan.

Julian Oliva Jr., one of the counsels of the families, however, was quick to manifest that it is taking more than five seconds for Mallares to ask his next question.

Edre Olalia, secretary general of the National Union of Peoples’ Lawyers, said Mallares’ cross-examination was designed to tire and mislead Manalo by mixing up the facts of the case.

He noted that while there might be “differences” in his testimony compared to the affidavit he made in 2007 for the Amparo proceedings of the Manalo brothers, these are too small to matter.

Olalia said such is possible as several years have already passed. Manalo, he added, was traumatized also from the torture he experienced at the hands of the military.

He added that Palparan failed to provide a good defense so they opted instead to discredit Manalo’s testimony.

Erlinda Cadapan, mother of Sherlyn, said they are not related to Manalo, who has no reason to fabricate stories on the two students’ disappearance.

Palparan’s lawyer was trying to discredit Manalo’s account which had been hailed by an en banc Supreme Court decision for being clear, consistent and convincing, Olalia said.

Manalo’s cross examination is set to resume on April 6.

Mallares, after the hearing, complained that he was having a headache.

Concepcion Empeno, mother of Karen, said, “he wanted to dig and find a loophole in Raymond’s testimony. But he ended up trapped in the same hole.”