‘The hikes sprang from the oil companies’ “imagination and greed,” which the Oil Deregulation Law gives them license to use.’

MANILA – “While the public is reeling from the shock of Mamasapano, the oil companies are taking advantage by forcing price hikes.”

This is the conclusion Jun Luna, the newly elected Anakpawis secretary general, arrived at from the P4 increases in fuel products imposed over the past few weeks, amid a general slump in global oil prices. While Anakpawis members were holding a picket protest in front of a Petron gas station in Philcoa, Quezon City morning of Feb. 24, he told Bulatlat.com that the price hikes have no basis at all. 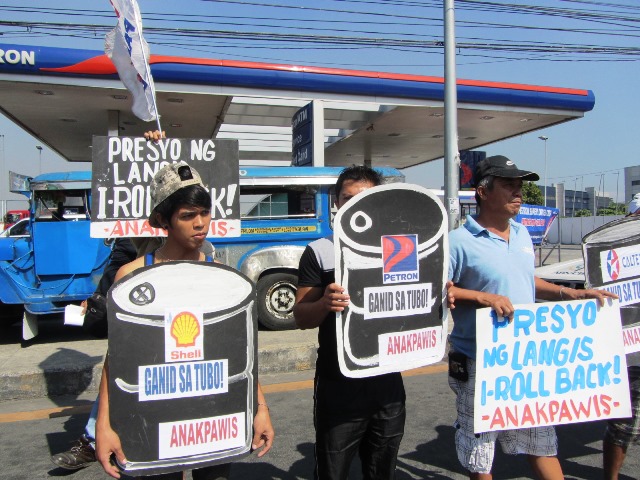 He said the hikes sprang from the oil companies’ “imagination and greed.” Something which Oil Deregulation Law gives them the license to use, the group’s statement said.

The Philippine Department of Energy’s oil monitor as of Feb. 17 noted “sharp increases” in global oil prices in the preceding week, but admitted in the same breath that prices “slowly receded starting Tuesday.” It noted the “downward market pressures” on oil products, meaning there is an ongoing “price slide” in crude products because of high inventories. Quoting the forecast released by the International Energy Agency (IEA), the DOE noted that the “downward market pressures may not have run their course just yet” by end 2015.

Yet, the oil companies operating in the Philippines seemed to have fixated on the blip of “sharp increase,” having used that to increase the price of fuel products three times in three weeks.

Transport leaders from various provinces who are allied with transport group and sectoral party-list PISTON also held a picket protest against the oil price hikes a day earlier, in Cubao, Quezon City.

George San Mateo, Piston president, blasted as baseless the three oil price hikes imposed over the past three weeks. He said there is an abundant supply of oil globally, and he insisted that diesel in the Philippines should have cost only P20; gasoline P29, based on the size of slump in oil prices in the world market since June last year.

Both Anakpawis and Piston demanded more price rollbacks instead. PISTON added that they are also adding to their demands the resignation of President Aquino, saying Aquino “colluded” with the Big 3 in oil overpricing, he maintained the Oil Deregulation Law, and continued to squeeze drivers through excessive fines and imposition of money-making schemes.