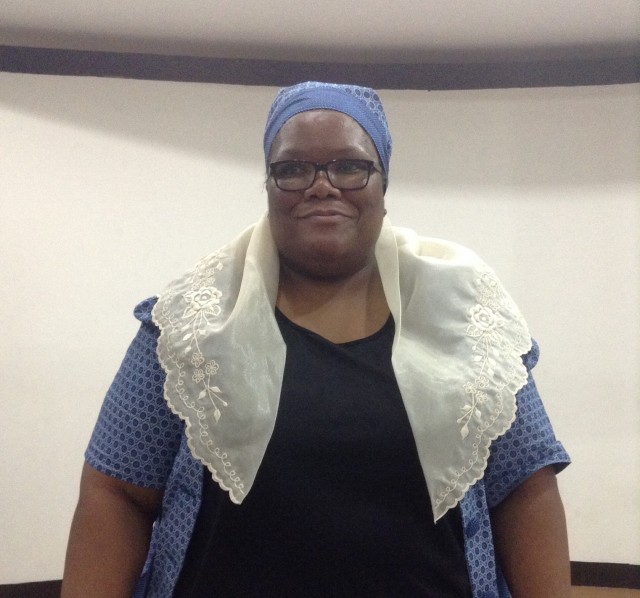 “I strongly believe we will get a cure. Maybe not today, maybe in five or 10 years time.”

MANILA – When Reverend Phumzile Mabizela, a church leader from South Africa, learned she contracted HIV, she was very devastated. Though she is a gender activist and was knowledgeable about the condition, contracting HIV, she said, was not something one would celebrate. But it was neither her own health nor what other people might think of her that worried her – it was her family.

Mabizela said she made sure that her children were well-informed about what HIV is before she disclosed it. They understood her condition and told her that they love her no matter what. But telling her mother was a different story.

“For my mother, my only living parent, it took much longer for me to disclose to her,” she told Bulatlat.com.

“I thought that she will give me a very long lecture – ‘you are a minister. You should have behaved, ra, ra, ra…’ But I was surprised to find that she was very positive about it. And actually said ‘we thank God that you were tested early cause that means that we will still have you for a very, long time,’” she quoted her mother.

Her family, she said, has been her greatest support.

Mabizela, the executive director of interfaith network INARELA+, is among those who have publicly announced that they are living with HIV. It was 1999 and she was applying for a life cover when she learned that she has contracted the virus.

“I applied for a life cover. And when you apply for a life cover, you have to be tested so they can assess the risks. That’s when I was tested. I had no symptoms, none,” she said.

Today, Mabizela has traveled around the world, educating both men and women on their vulnerabilities to HIV. Even her mother, who she feared would not have an easy time accepting her condition, too, has spoken to mothers of those who have contracted HIV and helped them deal with their children’s condition.

Most countries, she said, now have access to HIV treatment. The most advanced technology belongs to Western countries such as in the US, Canada and European countries. In poorer countries, however, sustaining such treatments is hard, which poses danger to people living with HIV as they become vulnerable to developing resistance to the medication.

Still, there are countries who do not even have access to technology for testing people with HIV, said Mabizela.

Mabizela stressed that it is the government’s responsibility to provide due medical services for people living with HIV.

“It evolves. There are always new challenges that we need to respond to,” she said, “The battle is not over. We need to find creative ways of accessing resources.”

The government, she added, should come up with ways to bring resources to the people and churches can be instrumental in this because “they are everywhere.”

Last month, Mabizela went to the Philippines to conduct a dialogue with church workers on her advocacy for people living with HIV. Below is part of Bulatlat.com’s interview with Mabizela:

What were the pros and cons when you decided to announce that you have contracted HIV?

You have to be prepared for a variety of responses. Some of my friends became very emotional. They started crying because they were scared that they would lose me. So I had to assure them that (it is manageable). As I have said, I have never experienced stigma. But some people go through that. So it is important for people to know the pros and cons of disclosing before they do it. So they would be prepared to deal with the positive and the negative responses.

Do you get irritated with people who are not educated on HIV discriminate against those who have?

I don’t. I feel sorry for them because they should know. And usually these are the people who are most vulnerable. The fact that they are prepared to reject you, it means that they are ignorant; they are not well informed on HIV.

What do you think is the role of the Church on how to combat or help people living with HIV?

The church was part of the problem so it is important for them now to be part of the solution. Some of the language that they used when HIV started coming to our country was very negative. And most people died because of fears of being rejected by their churches. But now, with the church deciding to become part of the solution, they are learning new theological reflections, new ways of life-giving sermons.

Therefore, I feel that we have a moral obligation as a church to actually change our messages of death, of suffering to messages of hope and life.

“Was” means that it was in the past. Can you give examples on how the Church used to be part of the problem?

It was the sermons, some of the teachings that they had, which exclude people from communion because they were living with HIV. And people who had symptoms like rashes were excluded from communion.

But the when priests were well informed, they were welcomed to the church and were able to participate in the communion.

What are the more proactive ways for the Church to help and reach out?

The first one is to make the Church a safe place for us, where people know that it does not matter what their status is. They will feel accepted and included in the Church. And once you do that, there will be enthusiasm to be tested because they know that they will not be discriminated against or rejected.

Secondly, the teachings of the church cannot ignore issues that are affecting people. The church has to be relevant and talk about issues that affect the people. So people can make sure that they get accurate information.

How can civil society groups be of help?

Here, there’s still a strong stigma against PLHIV. They are blamed for it. Is it true for other countries?

Oh, yes. But it is slowly changing. The more people communicate with PLHIV, the more they realize that there are solutions. You can’t assume that because someone is living with HIV, it is because of their promiscuity.

Educating the people, it is very important. And we can do it in creative ways.

And even if it was a result of their promiscuity…

We should not judge. We are all sinners. That’s another problem that the Church has created. Because sex is the biggest sin, as far as the Church is concerned. Yet there are so many things that people are doing.

What is the challenge for someone like you who lives openly with HIV?

I’m not getting any younger. So HIV and aging are huge issues. It comes with other disadvantages and issues that one needs to deal with. That’s the first thing.

Secondly, I have been on treatment for quite sometime now. And getting access to treatments is a challenge. That’s why I have been saying that even when people are tested positive, they still need support because there are other issues they need to deal with.

How would you compare 1999 and now? As far as HIV is concerned.

We have come a long way. The levels of awareness are very high. People are getting more supportive. People know how to protect themselves. People are aware of advantages and disadvantages, how to prevent transmission, and scientifically, I believe that we are very close to getting a cure.

You have travelled around the globe with this advocacy. What have you learned from the people you have met?

One of things is if there is a political will, countries can bring the prevalence down. But those governments who are reluctant to develop programs, that’s where HIV thrives, affects more people. It is not just developing policies. There has to be a political will to protect its citizens in those countries.