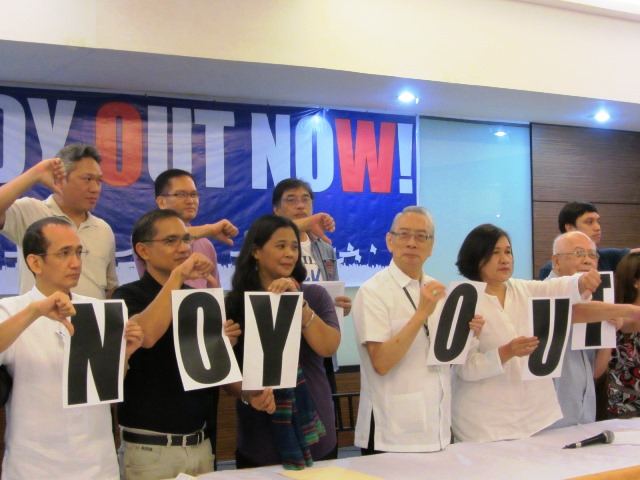 The Noynoy Out Now! Movement has been pushing for a People’s Council to replace Pres. Noynoy Aquino once he has been ousted, in place of a constitutional line of succession that would put Vice President Jejomar Binay in Malacañang.

MANILA – As President Benigno “Noynoy” Aquino’s speech solely blaming the Mamasapano blunder on former Philippine National Police-Special Action Force chief Getulio Napeñas draws widespread criticism and disbelief, calls for Aquino’s immediate resignation continue to be heard, as do the proposal to form a people’s council for reforms to replace him.

“The Mamasapano incident is just the tip of the iceberg of the Aquino administration’s guiltless sacrificing of lives for puppetry, which Aquino has been trying to cover up,” Dr. Joseph Carabeo, convener of the Rx: Aquino Resign Now! and one of the members of Noynoy Out Now! movement, said in a statement today.

But Aquino’s seeming coverup only seems to further put him under question, as netizens and texters of opinion to media say Aquino only gets himself deeper in quicksand the more he lies his way to absolve himself. After he blamed and insulted Napeñas, Vitaliano Aguirre, Napeñas’ lawyer, swiftly belied Pres. Aquino’s claims, saying his client has not committed insubordination, nor resorted to “pambobola” or lying. Now they are getting ready to speak up more about the issue.

Even some survivors refused to believe that President Aquino has no accountability in the operation that killed 44 PNP-SAF operatives, 18 fighters of the Moro Islamic Liberation Front, and five civilians last January 25.

Netizens and texters who send their opinions to various media outfits and social networking sites said their “eyes clearly see through Noynoy’s washing of his hands on the case,” and they asked Noynoy, “how hard is it to tell the truth and be humble in admitting mistakes?”

“Shame on us to have a president like this,” another said.

“It was Aquino, not Napeñas, who ordered the military not to rescue the PNP-SAF in battle. He cannot blame a subordinate for failing to coordinate with the AFP for a major operation which he clearly knew about,” Elmer “Bong” Labog, chairman of KMU, said in a statement.

The KMU and various groups in the broad Noynoy Out Now (NOW!) Movement reiterate their call for Aquino’s immediate resignation, and to replace him with a people’s council for reforms and justice.

When the Noynoy Out Now! movement shared its plans last week to call for a new type of people power to push Aquino to resign, they proposed the formation of a People’s Council for National Unity, Reform and Peace, an interim or transitional body that would see to it that the remainder of Aquino’s term will not be used for covering up his fatal blunders and paving the way for the smooth turnover to another elitist ruler.

NOW! expects the interim people’s council to ensure truth and accountability in the Mamasapano probe and to put in place key electoral reforms and anti-corruption measures prior to the holding of elections for a new government.


During the launch of Noynoy Out Now movement, Teddy Casiño, spokesman of Bagong Alyansang Makabayan (Bayan), enumerated at least four major tasks of the people’s council. The first two, as mentioned, are about establishing accountability for the Mamasapano fiasco and preparing for a clean, truly democratic election; the next two concern initiating economic reforms and resuming the stalled peace talks.

Regarding the first task, NOW! movement’s belief that Aquino is merely covering up and not really establishing a credible inquiry into the Mamasapano fiasco is given its latest proof in Aquino’s ‘blame it all on Napeñas’ speech.

During a prayer gathering in the Palace, Aquino said to some Christians last Monday, March 9, that Napeñas had “fooled” him during the operation, engaged in wishful thinking, and all but displayed stupidity.

“Kung ako ang may kasalanan dito, bakit di ko aakuin lahat?” Aquino had asked in his speech. He also said he only coordinated with Napeñas during the operation, which contradicted his earlier statements where he mentioned coordinating with sacked PNP Chief Alan Purisima, Kabataan Partylist Rep. Terry Ridon pointed out in a statement.

“Aquino talks as if he wasn’t in Zamboanga on that fateful day. He continues to blame his subordinates for the death of many Filipinos while refusing to disclose the truth about his accountability for the operation,” Labog of KMU said in another statement.


The labor group said Aquino’s claim about Napeñas’ refusal to coordinate with the Armed Forces of the Philippines contrasts with Napeñas’ statement that Aquino knew that coordination with the AFP would be “time-on-target” and that former PNP chief Alan Purisima told him not to inform PNP OIC Leonardo Espina and Interior and Local Government Sec. Mar Roxas of the operation.

“Hindi mo kami mabobola (you cannot fool us), Mr. President. You should abort your cover-up operation, claim responsibility for the death of many Filipinos and resign,” said Labog.

“Aquino’s resignation is imperative for the entire truth about the Mamasapano carnage to be determined and accountability pinpointed. It is the only way justice can be attained for the SAF, Moro fighters and civilians slain and sacrificed in the name of the US-led “war on terror”, NOW! said in its manifesto.

The group outlined the jobs for the people’s council they propose to form after Noynoy Aquino’s resignation:

Initiating political reforms – Casiño said the people’s council is a temporary replacement for the Aquino leadership. Aside from fact-finding on Mamasapano, the council, he said, would launch electoral reforms beginning with the overhauling of the Comelec, and ensuring it initiates moves to eradicate patronage/pork politics and acts on the issues raised by whistleblowers.

Initiating economic reforms – While Aquino remains as president, he and politicians closest to him continue to benefit from pork barrel which NOW! wants to abolish for real. The Aquino government has claimed some of the protested pork barrel have been discontinued, but subsequent reports during the 2015 budget deliberation showed pork still lards the national budget.

With the people’s council for reforms, Casiño also said they expect to initiate reforms such as genuine agrarian reform and national industrialization, which, he said, can meaningfully increase the income of the poor and the middle class. NOW! also proposes to initiate tax reforms.

The Noynoy Out Now! group said the People’s Council would rule for one to two years and would be formed “through a democratic process, from the wide array of organizations, groups and individuals involved in the movement to compel Aquino’s resignation.” They said its members will be patriotic Filipinos with a track record of leadership in the people’s movement for democratic reforms, with known probity, integrity and independence.