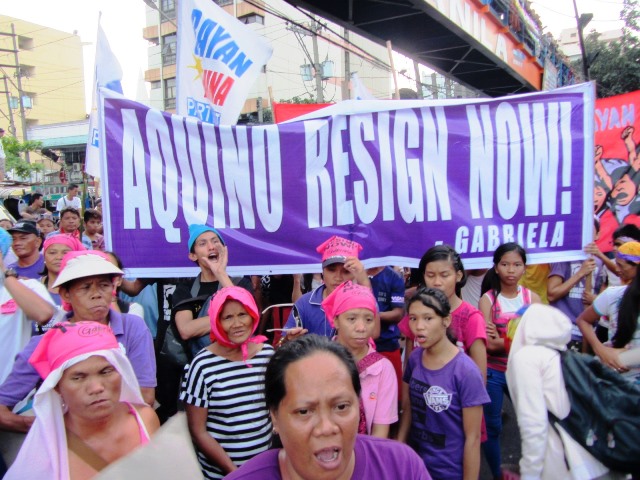 “We demand change, change for governance that is pro-women and pro-poor. We want all to have better life conditions. We want women’s rights and contributions to be recognized in society.”

MANILA – After the One Billion Rising Revolution on February 14, women from various cities in Metro Manila and nearby provinces gathered once again to celebrate the 202nd International Women’s Day on March 8.

Schools, people’s organizations, and non-government organizations, led by chapters of Gabriela and Gabriela Women’s Party, marched from Bonifacio Shrine to Mendiola to protest the predicaments of women under the Aquino administration.

The calls of women during the protest centered on the people’s demand for truth, justice and accountability on issues that involved the Aquino administration, such as the Yolanda disaster, pork-barrel scandal, and the most recent bloodbath in Mamasapano.

Women leaders and personalities at the protest action expressed their dismay towards President Aquino and his appointed officials for their lack of action and accountability for the sufferings they have caused Filipinos, especially women.

Gabriela Women’s Party representative Luz Ilagan said Aquino has done nothing to improve the lives of women, and has instead worsened it.

“Under his watch, women continue to experience many forms of violence, from domestic violence to economic violence. The prices of basic commodity continue to rise, as well as the fare for public transport, utilities, and tuition, while wages remain low,” Ilagan expressed.

“Aside from this, many abuses and harassments are perpetrated by state actors, especially in militarized areas like Mindanao,” she said.

“This administration has made so many decisions and implemented policies that are detrimental to women. It did not do anything to lessen domestic violence and abuses, but instead implemented policies that made women more vulnerable, like what is happening in Mindanao, after an all-out war against BIFF has been declared. What will happen now to women and children who are caught in the conflict?” she added.


Former Gabriela Women’s Party representative Liza Maza shared the same sentiment. Maza said that Aquino’s consistency in making erroneous decisions in all his five years of stay in office has earned him a new title: “The King of 4Ps – Pahamak, Perwisyo, Pabigat and Papet ng US”.

“Poverty and hunger in the country worsened. Wages remained low and there are still no jobs for the unemployed. Farmers still have no land. Families still have no home. Tuition in schools and universities, as well as cost of utilities and basic commodities, including fare in public transport continue to increase. And where are the women here? They are the one who suffer the most,” she said.

Meanwhile, Joms Salvador, secretary general of GABRIELA, urged women to stand up, fight for their rights, and put an end to the futility of the Aquino administration.

“On this day of International Women’s Day, we in Gabriela urge all women to prove to everyone that we, women, are part of the nation. And as part of the nation, we are involved in social issues, we uphold our rights, and we fight for the advancement of society,” Salvador said.

“We demand not only for our rights and contributions to be recognized; we demand decent work and livelihood; we demand free, accessible, and reliable social services; we demand lands for farmers; and we demand a society that will let us live decently and fruitfully,” said Salvador.

Salvador also called on the president to step down. She said, Aquino is no longer serving the people, thus there are no more reason for him to stay in the office.

“Aquino must resign! His leadership, or lack of it, has no place in the country. The people, especially the women, want a better condition of living. And we will not be able to achieve that if he still holds the leadership. Aquino impedes the development of our country.”

Salvador added that everyone should join the clamor for Aquino’s resignation.

“If we really want change, everyone, not only women, come together and call for the President’s resignation. It is our collective action that can create noise that is too loud for the government to ignore. The people shouldn’t be afraid of what will happen after the President steps down. What we should be more afraid of is what will happen if he will remain in power and continue making flawed decisions and causing harm to people.”

One Billion Rising Global Director Monique Wilson, meanwhile, called on all women to keep demanding truth, justice, and accountability even after the celebration of women’s day and women’s month.

“The call for truth, justice, and accountability should not start and stop here. We should all continue rising for ourselves and our rights for a better life,” she prodded 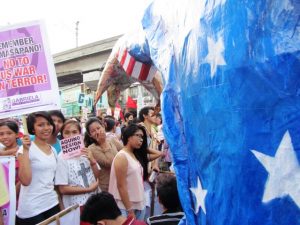 “We demand system change, truth and accountability, and we also demand that women be given the freedom, equality and dignity they deserve. System change is very important, but we can’t achieve it if the President, who is the root cause of all problems, is still in office. We can’t eradicate poverty and put an end to impunity and violence if we have a leader who doesn’t have compassion for women and the rest of his people,” she said, “We should demand that President Aquino resigns from his post now.”