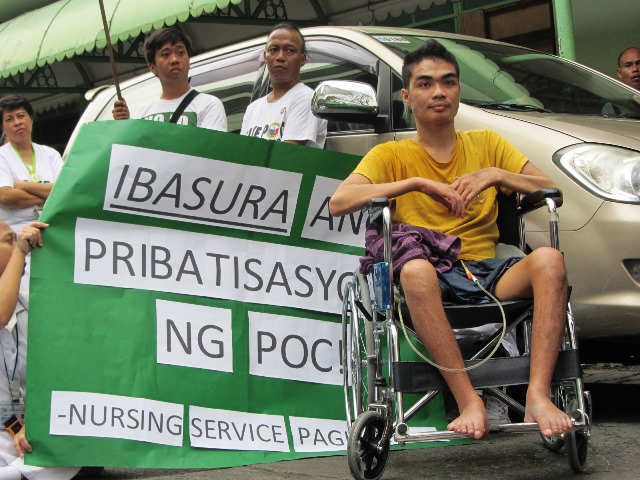 “We also need to live, we are also human.” – Jay-R, wheelchair-bound patient

MANILA – “For two years now, health workers and patients have opposed the privatization of POC, and during the same two years, the government tried to consolidate its privatization,” Emma Manuel, chairman emeritus of Alliance of Health Worker, said last Friday March 13 during a midday sitdown strike of health workers of Philippine Orthopedic Center (POC).

Manuel said President Aquino is rushing to complete the POC privatization as 2016 nears. The health workers, patients and their watchers responded by upping the ante of their struggle. In their sit-down strike at the driveway of the hospital, they delivered their message in chants, placards and speeches: “Save POC,” “Junk PPP/Privatization.” Their proposal instead: “On site development with public funds.”

Under the Aquino government’s planned PPP or privatization project targeting POC, the only government specialty hospital on bone diseases, they packaged the privatization as “modernization” of the hospital to be funded jointly by taxes and by private developers, but between the two, it is the private group who would operate the hospital and recoup its investments, plus earn some guaranteed profits. The packaging did not fool the health workers in the center, who mounted protests after protests.

With the health workers’ continuous resistance, they earned the support of even the hospital director, Jose Pujalte Jr., who promised Friday’s participants of the sitdown strike that like a ship’s captain, he would be the last to leave the fight against the privatization of POC.

In a much applauded speech before the protesting employees, patients and their watchers, the hospital director agreed that with the privatization of POC, it will be the poor patients who would lose.

A fight not just for self-interest

The POC employees are opposing the privatization of POC not just because they want to hold on to their jobs. “We are fighting for our patients and for our patients yet to be born,” said Dante Perez, vice president of National Orthopedic Workers Union.

For the health workers’ union, losing the struggle against privatization of POC would mean a grave loss not just for today’s generation but for the future generation also of would-be orthopedic patients. Perez said that if the POC were to be swallowed up by the private group Megawide-World Citi Consortium, access of the poor to bone specialty care would narrow considerably.

“We also need to live, we are also human,” a wheelchair-bound patient called Jay-R said in a brief speech during the POC sit-down strike.

In the health workers’ March 2 dialogue with Health Secretary Janette Garin, the latter confirmed that not only will 100-percent of POC employees lose their jobs in the privatization, the poor patients would also lose much because only 10 percent of hospital beds would be allotted for charity, the 90-percent is for pay ward or for patients who can pay.


Most of the people being served by POC come from the poor, a nurse shared during the Rx Aquino Resign Now sitdown-strike. “In the 30 years I have served as nurse here, the patients with means to pay are quite rare,” said Soledad Veloria, 54. She clarified that it doesn’t mean their patients are not paying at all, given how they are increasingly forced to pay for every service, medicine and “appliance,” like the metal things doctors would install on patients to help their bones heal correctly.

The announcement of POC modernization had cheered Veloria at first – “Who is the health worker who wouldn’t be happy with that?” she asked. “We all dream to make our services more effective,” Veloria added.

But the cheer for Veloria ended when she learned that ‘modernization’ comes with strings attached — the profit-driven operation of the center. Even health workers themselves get sick, or their family, or their friends, and they might need but not afford the services of the POC, said Veloria. 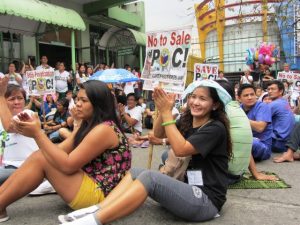 Under the PPP scheme of the Aquino administration, tycoon Henry Sy buys control of POC for just P5.6-billion. With the contract lasting up to 50 years, Henry Sy gains up to 50 years of license to profit from the operations of POC.

Sean Velchez, POC Employees union president, urged the POC health workers and those in other counties to send a strong message to Health Secretary Garin and Malacañang that privatizing the POC will kill its own nationwide services.

POC employees estimate that if the Aquino administration’s drive to privatize POC pushes through, it would mean the deprivation of around 400 outpatient poor people who patiently line up as early as 4 a.m. until 5 p.m. everyday to be treated.