“Junk the labor export policy. Noynoy, resign.You should leave now. This is what I want and what everyone wants.”- Nora Aunor

MANILA — It was as if Flor Contemplacion was never executed.

This was the resounding message in the protest action by overseas Filipino workers (OFW) and their families commemorating the 20 years since Contemplacion’s execution.

They called for President Aquino’s resignation over government disregard for the dire conditions of those who are now euphemistically referred to as “modern-day heroes.”

Protesters were joined by no less than actress Nora Aunor, who played Contemplacion in the film “The Flor Contemplacion Story.” Speaking at the protest, she called for Aquino’s resignation over his sins to Filipino migrant workers.

“Junk the labor export policy. Enough. Noynoy, resign,” Aunor said. “You should leave now. This is what I want and what everyone wants.”

Contemplacion was falsely convicted and executed in Singapore for the alleged twin murders, of fellow domestic helper Delia Maga who was found strangled, and her ward, four-year-old Singaporean Nicholas Huang, who was found drowned in their home on May 4, 1991. 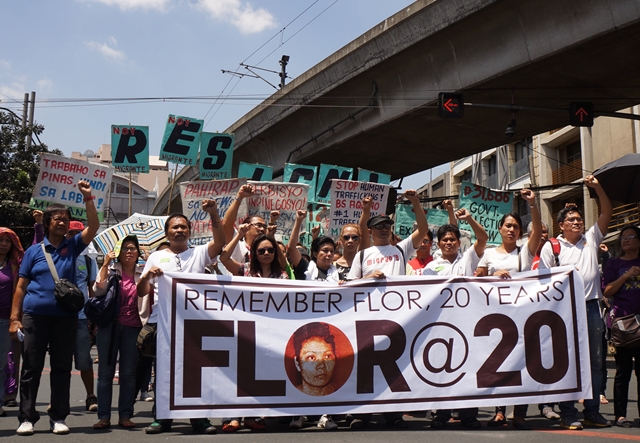 Among the protesters were abused OFWs who have appealed in vain for government help.

“My only weapon were tears and strong spirits in the face of harrowing experiences I went through abroad. That is why I am fighting with them,” Noela Garcia, 36, an OFW who was recently repatriated from Riyadh, Saudi Arabia, told Bulatlat.com.

Garcia is among those who marched along Recto to Mendiola.

Mylene Catherine Villatema, 28, is one of the many distressed OFWs that had sought the help of Migrante. She had worked abroad as a domestic helper, twice, but experienced abuses from her employers in both occasions.

She first worked in Qatar, but only for 11 months, unable to bear the physical abuses by her male employer. “My employer pressed iron on my arm,” she said in an interview.

Villatema had just returned on Feb. 2, from her second job in Dammam City, Saudi Arabia after working there from May 2013. She was just a few months from finishing her contract, but chose not to.

“There was no sleeping area, they beat me up, hit me and pull at my hair,” Villatema recalled the physical abuses she endured. She said the family would only give her their leftover, three-day old food, and she had to buy noodles and coffee for herself. They didn’t even give her medicine when she got sick, she said.

“I wasn’t able to bring home anything,” she lamented. She was passed on from one employer to another, four times. The last employer held back three months of salary, which remains unpaid up to now.

Villatema said an official of the Philippine Overseas Employment Authority (POEA) told them that there would be a “hearing” of their case, and gave them a contact number of a lawyer. There has been no progress, she said. “I just want to get my unpaid three months of salary,” she said.

“My employer beat me and even pointed a gun at me. They sent me to the desert and was told to not return until I find a rat,” she said. Asked why her employer would demand such, “I have no idea. Trip nila.”

Ramos was a domestic helper for a family who were reportedly among the royalties of Saudi Arabia. She was repatriated last Jan. 23, after enduring nearly a year in a deportation center.

Theresa Molina, 43, had twice worked as a domestic helper in the Middle East, and said she had no problems with her employers. The first time was from 2007 to 2009 in Al-Khobar in Saudi Arabia, and the second time was from 2011 to 2013 in Kuwait.

“It was okay,” she described her experience as a migrant worker. She said she joined the protest to give support to fellow OFWs who were subjected to abuses.

Molina said she has reapplied to work again in the Middle East because she can’t get any job with living wage.

“I had tried working as a vendor, selling breakfast wares,” she said, but she hardly earned any profit. “Everything costs too much,” she said.

In her speech, Russel, Contemplacion’s daughter, said she could not help but be emotional when she saw actress Nora Aunor, who portrayed her mother in the film. It was as if she has seen her mother again after a very long time, she added.

The two hugged each other, both teary-eyed, before they marched to Mendiola.

“Nothing has changed. Until now, a lot of Filipinos abroad still go through harrowing experiences in the hands of their employers,” Russel told the media, adding that she was in her late teens when her mother was executed.

Russel also took the opportunity to thank all the organizations who have been with her and their family, from the last-ditch efforts to save Contemplacion from execution until now in remembering her after 20 years.

Rodolfo Malinao Jr., in an interview with Bulatlat.com, said he found it revolting that the government continues to fail to protect overseas Filipino workers abroad. His wife, Rochelle Masubay, whose remains were recently repatriated, allegedly committed suicide.

Her family, however, is not convinced.

“We have two young children. She would not go abroad just to commit suicide,” he said.

Malinao said Masubay left for Jeddah on May 25, 2014. In their last conversation, his wife told her that she has “good employers” who even offered to buy her a laptop. For more than half a year, their family was worried as Masubay was not able to return their texts and calls.

But last Jan. 3, he said, they were informed by his wife’s agency that Masubay was found dead. He was presented with a document, saying that she died on Oct. 16, 2014. But in a separate document from Jeddah police, Masubay reportedly died on July 1, 2014.

Malinao added that Masubay’s remains bore a stab wound in her chest.

Just last week, an OFW in Saudi Arabia Joven Esteva was executed for allegedly committing murder. Another OFW Mary Jane Veloso is also set to be executed by firing squad in Indonesia allegedly over a drug-related case.

The Migrant Workers Act of 1995 was enacted by Congress after the sorry plight of OFWs came to national attention with Contemplacion’s death.

“The law was supposed to give attention to migrant workers like Flor Contemplacion and Delia Maga, through programs such as giving legal assistance, repatriation for distressed OFWs, and assistance in reintegration for those who are coming home for good,” said Ferdinand Gaite, national president of the Confederation for Unity and Advancement of Government Employees (Courage).

He said the law, however, has done nothing for migrant workers.

“OFWs continue to be burdened with government fees, but do not get any government attention when they run into problems abroad,” Gaite said.

Gaite said OFWs also continue to be “exploited” through state exactions. The fees that government exact from OFWs continue to increase, reaching up to at least P15,000. Gaite said these include the fees paid to the Department of Foreign Affairs for the passport, to the Overseas Workers’ Welfare Authority (Owwa), the POEA, and the Medicare insurance. This does not include the prerequisite life insurance taken with the private company.

Worse, OFWs pay placement fees ranging from P30,000 to P130,000 to placement agencies, just to be able to get work in another country.

Gaite, who worked at Overseas Workers’ Welfare Agency (Owwa) from 1987 to 2003, said that an agency like Owwa can only give “stop-gap” efforts, but cannot end problems created by government’s labor export policy.

“If it weren’t for the OFWs remittances of $26 to 28 billion, the economy would have long collapsed,” he said. He lamented that up to 5,000 to 8,000 Filipinos leave everyday to find work abroad, and the number keeps rising.

From OCW to OFW 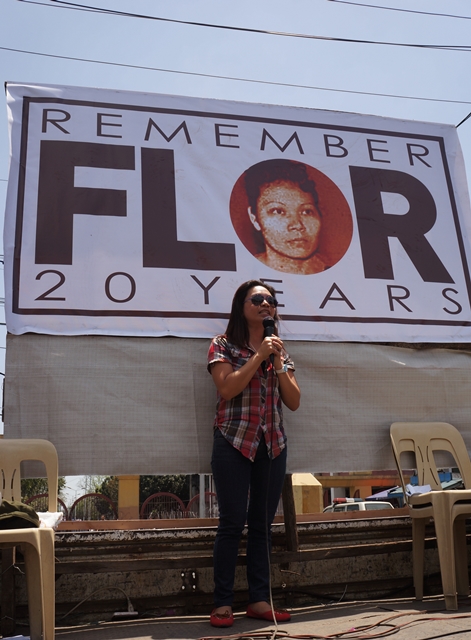 Contemplacion’s story exposed how the contractual arrangement for majority of migrant workers means a temporary, unstable job that is prone to abuse, and is outside government protection.

“It’s a useless change of term, with the aim to ‘deemphasize’ the contractual condition of workers,” Gaite said. Meanwhile, government continues to treat OFWs as “milking cows” and ignore their plight, he said.

Joms Salvador, secretary general of Gabriela, said she gets “pinched in the heart” every time she remembers Contemplacion.

In a statement, Migrante International said the fact that there are nine OFWs executed abroad, “the biggest number so far under one regime,” goes to show the insincerity and ineptness of the of Aquino administration to uphold and secure the welfare and protection of Filipinos abroad.

Gabriela Women’s Party Luz Ilagan said the government did not learn anything from Contemplacion’s execution.

There are at least 7,000 Filipino migrant workers detained in various detention cells abroad while 80 are in death row, said Ilagan, who is also a member of the House of Representatives Committee on Overseas Workers Affairs.

Garry Martinez, chairperson of Migrante International, said Aquino betrayed and criminally neglected OFWs, especially those who are in times of crisis and emergency.

OFWs and their families, the statement read, “shall hold accountable the Aquino administration for every single OFW’s life that has been placed under threat and danger.”

“This, undoubtedly, is the best way to commemorate Contemplacion’s 20th death anniversary.”