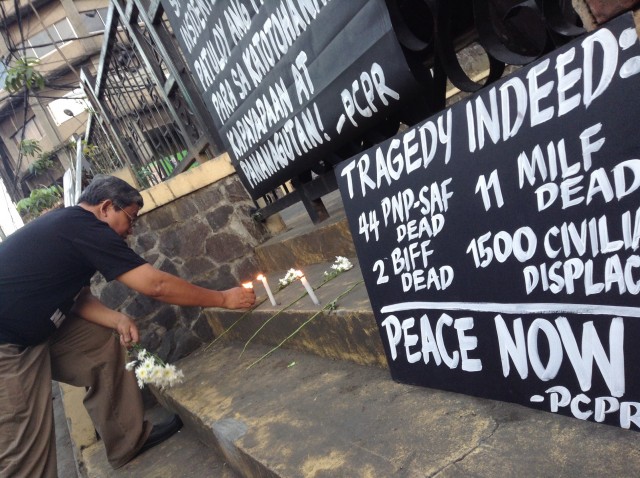 “We just want peace. We do not want others to go through the kind of pain we are experiencing.” — Julie Cayang-o, one of the widows of the SAF 44

Cayang-o’s husband, PO2 Gringo Cayang-o, is among the 44 members of the Special Action Force who were killed during the botched police operation in Mamasapano town in Maguindanao. Among those who were killed were 18 Moro fighters and five civilians.

Cayang-o, 25, said she already told their two children, ages five and two, that their “daddy is already in heaven.” But the two children, she said, continue to hope that their father would come down from heaven to give them a call.

The widow attended a short meeting with church leaders, among whom was Bishop Emeritus Gabriel Garol of the United Church of Christ in the Philippines, nuns and church workers from the Promotion of Church People’s Response. The religious held a mass led by Auxilliary Bishop of Manila Broderick Pabillo on the second month of the Mamasapano clash.

The last time Cayang-o talked to her husband was on the eve of the botched operation, when he informed her that he is running out of battery and would need to turn off his phone.

Two months since the Mamasapano fiasco, however, the Aquino government has yet to make a convincing explanation on who should be held accountable. In a recent survey of Pulse Asia, at least 79 percent expressed disatisfaction over Aquino’s pronouncements about the incident.

Yet, families of the killed SAF troopers, too, are virtually kept in the dark just as the rest of the public is. Cayang-o said they rely on the media for the daily grind of the case and that they downloaded the reports of the Board of Inquiry and the senate from the internet on their own.

Cayang-o does not believe that Aquino’s apology is a “trap” unlike what Sen. Paolo Benigno “Bam” Aquino IV, the president’s cousin, said. And if ever Aquino would really apologize, she said, the families of those whose lives were sacrificed for the police operation, would “see through” it and know if it was really sincere.

“We just want peace. We do not want others to go through the kind of pain we are experiencing,” she told church leaders.

In their struggle to know the truth and to attain justice, Cayang-o said her heart also goes for others who lost their loved ones, especially the civilians.

She told Bulatlat.com, “I hope that justice would be served to everyone. That is the only way to ease our pain.”