On April 12, 2007, at around 9:30 p.m., a pick-up truck was on its way to Iloilo city coming from Antique when it was tailed and eventually, waylaid by vehicles of suspected state forces in Cabanbanan village, Oton, Iloilo province.

Armed men forced Leeboy out of the driver’s seat, then shot him. The two other passengers were forced out of the pick-up and taken in separate vehicles, witnesses say. The men then drove off, leaving Leeboy for dead. While he managed to survive the gunshot wound in the neck, the two remain missing. 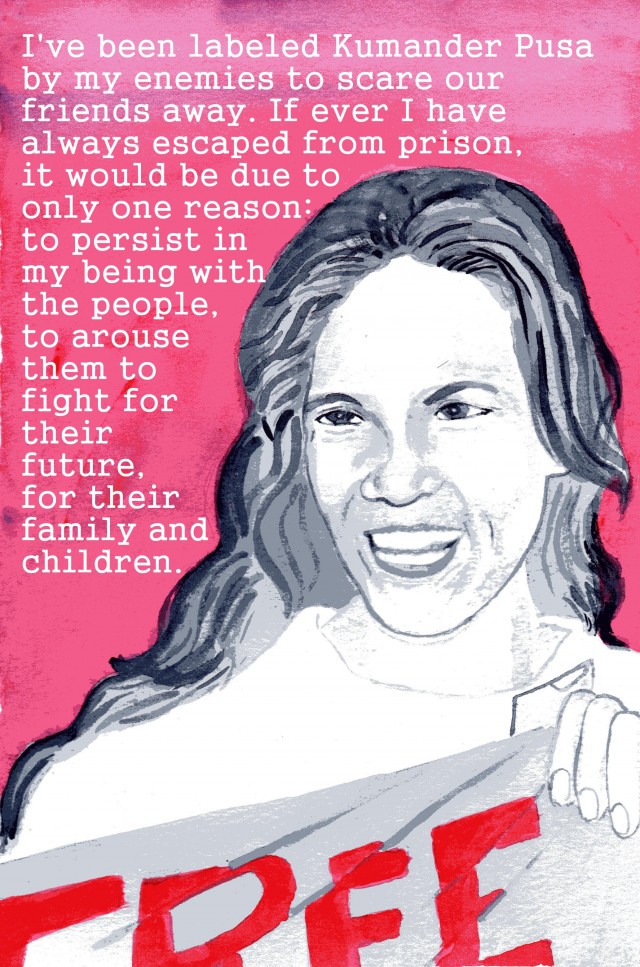 Luisa or “Luing,” became an activist at 16, in her first semester as a freshman student in 1971 at the Collegio de San Agustin in Iloilo City. In her second semester, Luing became a full-time activist and became one of the pioneers of the women’s group Makibaka in Panay. She eventually went underground even before the declaration of Martial law in September 1972.

She became the legendary “Kumander Pusa” – a label given to her by the military – for being able to escape detention three out of the five times that she was captured.

Luing was first arrested in Roxas, Capiz on March 29, 1973, along with two others. Being the only female, she was detained in the officers’ quarters, from where she escaped.

She was captured again, later that same year, in July 1973 in Antique province, along with now UP Prof. Judy Taguiwalo. They were brought to Iloilo, where they were tortured, then to Manila, where they were detained. Luing was released two years later, in 1975.

Released in October, Luing went back to the countryside of Iloilo, where, a month later, in November, she was arrested for the third time.

This time, she was detained with her fiancé Tomas Dominado. Their families, with the cooperation of their military captors, granted the couple a ceremonious wedding on March 28, 1977, in the hope that marriage will make them want to lead less radical lives.

But their marriage vows only strengthened their commitment to serve the people, as the couple escaped detention later that year in August, and went back underground.

The fourth time she was arrested, in 1980, Luing managed to escape again, from a jail in Iloilo, along with seven other political detainees.

Luing’s fifth capture was in 1987, during the regime of Corazon Aquino.

“I’ve been labeled Kumander Pusa by my enemies to scare our friends away,” Luing said in an interview. “If ever I have always escaped from prison, it would be due to only one reason: to persist in my being with the people, to arouse them to fight for their future, for their family and children.”

Luing had been charged with criminal offenses such as murder, double murder and illegal possession of firearms, but all were dismissed. In 1990, she was acquitted and finally freed after three years in jail.

She was then 35. This time, she went back to school and got a college degree in Education, graduating in 1995. She also joined the legal and democratic mass movement, organizing the sectors in urban areas. She also became a leader of the Samahan ng Ex-Detainees Laban sa Detensyon at Aresto (Selda), which campaigns for the release and rights of political prisoners.

“Organizing is the key. If people are not organized…nothing will happen,” Luing had said.

Luing is known for her determination and optimism, which made some people believe the slippery, daring, laughing-in-the face-of-danger “Commander Cat” branding.

But beyond the label, Luing had gained the respect and admiration of many because of her commitment to serve the people, to arouse, organize and mobilize whether in the countryside or the cities, to help solve urgent problems while working for a more distant, brighter, better future. Her two daughters attest to how she is a caring mother, not just to them, but even to individuals who needed help and shelter.

In spite of the torture, detention, harassment and threat even to her family, Luing did not falter, and instead became even more fired up to fight for the rights of the people.

“Although it is a constant struggle to be courageous, to remain optimistic despite all the trials in life, people are affected, not with the myth of Kumander Pusa, but with my durability,” she said. 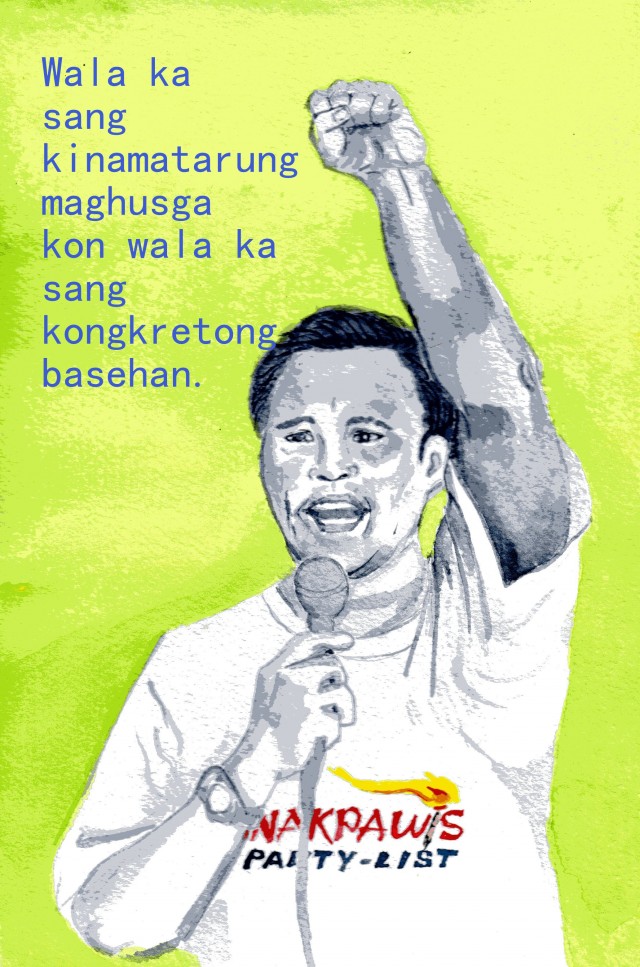 Leonilo “Nilo” Arado was born on January 8, 1968 in San Francisco town, Agusan del Sur province in Mindanao. A son of a parish worker, Nilo had a religious upbringing, which developed in him compassion for the poor and powerless.

Nilo wanted to be a priest, and entered the Carmelite Seminary in Negros Oriental, taking up Theology. Instead of being cocooned in studies for priesthood, Nilo found for himself a new path to serve God and the people, as he became exposed to the social realities in the communities of peasants and fisherfolk.

In 1990, he left the seminary and joined the Fisherfolk Development and Education Center (Fidec) which was based in Cebu in Central Visayas.

In 1994, he asked to be deployed to Panay island in the Western Visayas, and became an organizer of fisherfolk and farmers in Iloilo. He eventually became the secretary general of the Paghungpong sang Manguuma sang Panay kag Guimaras (Pamanggas).

Nilo became endearingly called “The Plough,” as his surname Arado is Hiligaynon for the peasant tool used to break the ground in preparation for sowing. And that was just what he did, as he organized in peasant communities, conducting social investigation, educating about genuine land reform, neoliberalism in agriculture, and the need for the peasantry to unite and assert their rights.

It was in mass work that he remoulded himself, his outlook and ways, relying on the people while helping them raise their political level, practicing the line “from the masses, to the masses.”

Nilo was known for being mild-mannered, encouraging and cheerful. Although seldom angered, he would not let pass any loose remark or sloppy work, knowing that it could have negative effects on the organization and the people.

He was known to echo one of Mao Zedong’s tenets for mass work: “Wala ka sang kinamatarung maghusga kon wala ka sang kongkretong basehan (You have no right to judge if you have concrete basis).”

Pamanggas became at the forefront of campaigns for genuine agrarian reform and national industrialization.

In 1998, Nilo married Rosemarie, a fellow peasant organizer. They have a son named Daniel Marshal, born in 2000.

In 2006, Nilo led Pamanggas in its island-wide Kontra-gutom (anti-hunger) campaign, which mobilized thousands of peasants to push for government food and agricultural subsidy for peasants, amid the exposé of the fertilizer fund scam of the Arroyo regime’s agriculture officials.

Nilo was the regional coordinator and sixth nominee of the Anakpawis partylist when he was abducted.

“We realized how important memorials were to keep alive a movement and to keep it vigorous by looking back to its heroes. It’s been good for families who suffered sorrow. And it’s been good for the new generation who would not know these heroes if we didn’t introduce them.”

So said Luing, as she talked about a series of memorials held in Panay island for martyrs of the mass movement. This was a few years before she and Nilo were disappeared.

In 2012, the Save Luisa and Nilo Movement put up a monument for the two, and 200 others who were disappeared under the regime of Gloria Macapagal-Arroyo.

Luing and Nilo, clearly, are among the many models of self-sacrifice, commitment and service to the people.

This article was sourced from the book “Pagtatagpo sa Kabilang Dulo, Panitikang Testimonial ng Desaparecidos,” published in 2009 by the Families of the Desaparecidos for Justice (Desaparecidos), the Amado V. Hernandez Resource Center, in cooperation with the Taiwan Foundation for Democracy.