DAVAO CITY – The Panalipdan Southern Mindanao together with sectors and communities affected by mining disasters staged a protest rally in front of Mines and Geosciences Bureau XI (MGB) office on Tuesday April 21.

The environmental advocacy group declared MGB “inutile and not worthy of the Filipino taxpayers’ money.” 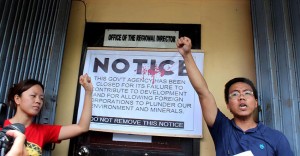 Panalipdan – SMR spokesman Kim Gargar said the Mining Act of 1995 has worsened the poverty in the country.

“Years have already passed after the Marinduque mining disaster where Canadian Marcopper Mining destroyed the beautiful island of Marinduque. Victims are still denied justice up to now. People who were affected by the mining disaster have yet to be given attention,” Gargar said.

Gargar also said they have been calling for MGB to disallow and disapprove foreign large-scale mining corporations.

“But until now MGB has not heeded the call of the people,” Gargar said.

He added that they wanted the immediate closure of the agency to stop all mining activities in the region.

The protesters put up a “Notice of closure” signage at the MGB office, but its employees took it down.

Arreza explained they are just public servants implementing the law passed by Congress.

“It seems that they are barking at the wrong tree. Because we, in the bureau, are just implementing the law. This law was passed by congressmen so they should address their demands to them,” he added.

Arreza urged the protesters to go to Congress if they want their complaints to be heard.

“In fact, they have several partylist representatives who can support them. We here are hopeless, we are just public servants,” Arreza repeated.

He also said that small-scale mining activities have resulted to pollution of rivers because of improper waste disposal.

“Who caused the pollution? It was the small-scale miners who are untouchable,” he said.

Arreza said that in the region there are only two large-scale mining companies, Apex Mines and Holcim.

But Gargar said MGB as an agency is “interpreting only the letter of the law and not balancing whether these laws would benefit the country or not.”

“Therefore, the MGB has accelerated the destruction of the environment,” Gargar said.

Bagong Alyansang Makabayan Secretary General Sheena Duazo said the MGB should not be recognized as a government agency that supposedly considers the interests of the people.

“As an agency that issues permits and clearances to mining companies, they only serve the interest of mining corporations who are accountable for the destruction of the environment and the livelihood of the communities especially during calamities,” said Duazo.

The group cited several cases of environmental destruction such as “the pollution of the river in Padcal due to the mishap of Philex Mines; the wide-scale destruction of marine life in Claver, Surigao del Sur, due to the operations of Taganito Minerals Corporation; and the suffering of the people 15 years after Marcopper Spill in Marinduque.” Reposted by