A number of mass leaders and activists are now banned from Congress for “shouting and displaying of banners” inside its august halls.

MANILA – Kabataan Rep. Terry Ridon slammed a memorandum of the House of Representatives (HOR) that bans at least 50 progressive leaders from entering its august halls.

Lt. Col. Isabelito P. Flores, executive director of the HOR Legislative and Security Bureau, issued the memo which bans those who violated “proper behaviour and decorum” as stated in the guidelines “Reception of guests in the HOR.” 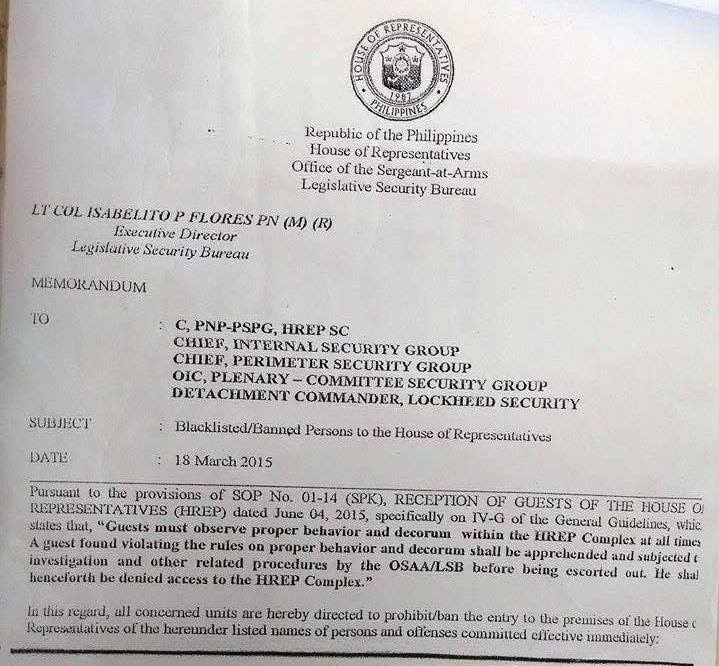 The memo invokes the House guidelines, which states: “Guests must observe proper behaviour and decorum within the HREP Complex at all times. A guest found violating the rules on proper behaviour and decorum shall be apprehended and subjected to investigation and other related procedures by the OSAA/LSB before being escorted out. He shall be henceforth denied access to the HREP Complex.”

Their violations were “shouting and displaying of banners” inside the conference room or at the plenary hall.

“This new memorandum, issued by Flores, is inimical to the image and message of Congress being the ‘House of the People,’” Ridon said.

He added that the memorandum “essentially transforms the HOR into a rich gentleman’s club.”

The memo has been “secretly implemented” by the House leadership, Ridon said, and they only learned about it when the House security personnel barred the entry of several student leaders who were invited to a House panel hearing this week.

Ridon was only able to take snapshots of the memo, as his request for its full copy was ignored.

The memo was implemented without the knowledge and approval of the members of the HOR, Ridon said, adding that there has been no investigation on the alleged “decorum violations” of the banned individuals.

The new security memo also “severely hampers” their legislative work, as shown in the “processes” they had to go through to allow entry for their resource speakers for student-related bills, he said.

The youth solon said they are mulling the filing of charges against those behind the memorandum.

“This new security memo is essentially a draconian move instigated by an insecure administration that will go to any length to curtail dissent and the people’s freedom of expression and association. How can Congress be truly a House of the People if leaders of peoples’ organizations are not even allowed to step into its premises?” Ridon said.

Those who were blacklisted posted their reactions on social media network. Crisostomo said in his Facebook, “Blacklisted…and proud.”

“I was barred for ‘breaking decorum’ protesting the congress ‘yellow-wash’ of President Benigno S. Aquino III accountability in the Mamasapano bloodbath and exposing DAP (Disbursement Acceleration Program), pork corruption outside the congress gates.”

He added, “It’s outrageous considering congress should be representing the people. But if you think about it: Mga bawal pumasok sa kongreso (Those who cannot enter the Congress): human rights activists, union leaders, anti-corruption advocates, peasant leaders and land reform advocates, leaders aspiring for social change.

Mga nasa loob ng kongreso (Who are inside the Congress): pork and DAP kurakots (corrupt), plunderers and representathieves, landlords and warlords, human rights violators, sipsips and alalays of the ruling clique. It makes perfect sense. I consider it a badge of honor.”

How to be blacklisted in the House of Reps? Voice out the democratic and legitimate demands of the Filipino people.

Meanwhile, Arao said that he does not recall ‘displaying…banners inside the conference room’ (not that there is anything wrong with it).”

“Nevertheless, I am honored to be in the company of Mae, Bong, Marc, George, Ferdinand, Charlotte, Sarah and Jossel. The HOR may not be aware of it, but this memorandum shows utter disregard for transparency and accountability. For the sake of democracy and raising the level of discourse at the HOR, especially during public hearings, the memorandum should be withdrawn immediately.”