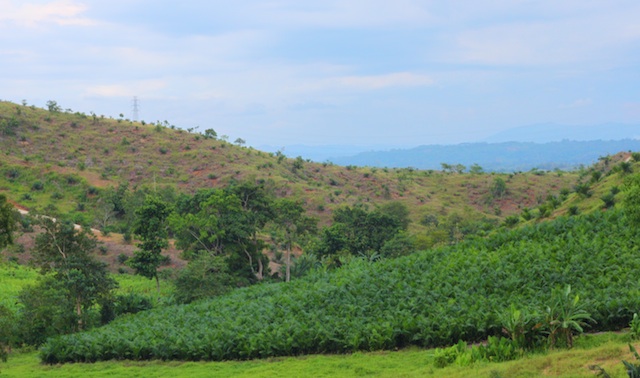 “This pesticide is so poisonous that a teaspoonful can kill a human being. Workers die when their backpack sprayer malfunctions and they get covered in the herbicide.”

MANILA – Representatives of 20 organizations of peasants, indigenous peoples, workers and green advocates from around the country are calling for the banning of pesticides used in the palm oil plantations.

“The use of toxic pesticides in oil palm cultivation such as Furadan, Glyphosate and Paraquat poses health hazards not only to farm workers directly handling these toxic materials but also to entire communities affected by the contamination of water systems,” said a statement by groups that formed the Network Opposed to Palm Oil Plantations (No Palm).

The use of hazardous pesticides was one of the issues being raised by the network, as the government heightens its drive to prop up the palm oil industry.

The network was formed by groups at the National Oil Palm conference organized by the Rural Missionaries of the Philippines-Northern Mindanao Region (RMP-NMR), Center for Trade Union and Human Rights (CTUHR) and Hongkong-based Asia Monitor Resource Center (AMRC), held on May 9 to 10 in Davao City.

In the conference, different groups shared problems of illnesses and landgrabbing because of the entry of palm oil plantations.

“Residents interviewed in Opol, Misamis Oriental started to notice illness that they can only attribute to A. Brown’ Company’s chemical use in the palm oil plantation. Many of them suffered from abdominal pains and diarrhea,” said Gueta citing results of the international fact finding mission (IFFM) in May 2012.

A. Brown is now named as A. Brown Energy and Resources Development or Aberdi after its merger with its wholly-owned subsidiary, Nakeen Corporation.

The Pesticide Action Network-Asia Pacific (PAN-AP), one of the groups, called Paraquat as “the worst of herbicides and has no antidote.” The group said those directly exposed to the chemical suffer from skin burns and blindness.

“This pesticide is so poisonous that a teaspoonful can kill a human being. Workers die when their backpack sprayer malfunctions and they get covered in the herbicide. Paraquat is fatal if ingested, and linked to several long term health problems including kidney failure, respiratory failure, skin cancer, and Parkinson’s disease,” PAN-AP said.

Gueta cited the IFFM report which said villagers in Opol experienced nausea and headache during spraying chemicals in the plantation. There are also increased incidence of cough and colds and various skin diseases. She added that plantation workers were not provided any protective equipment while spraying chemicals.

CTUHR cited its research in Filipinas Palm Oil Plantation Inc (FPPI) and Agusan Plantation Inc. (API) in the Caraga region which revealed that “there is no health and safety orientation given to workers concerning possible hazards of chemicals and fertilizers applied.

“In general, occupational health and safety and are not followed particularly with regard to handling pesticides,” the group said.

Gueta said environmental problems related to oil palm affect peasants, agricultural workers and indigenous peoples in the vicinity of the palm oil plantations. “Directly or indirectly, children, including infants, are at risk of continuous exposure to harmful chemicals and pesticides,” she said.

“Palm oil is one of the most highly-traded commodities at the global level. Oil palm is touted as a ‘tree of peace’ with its promises of livelihood and development, food security, poverty alleviation and economic stability,” said No Palm.

In their unity statement, No Palm said farmers, agricultural workers, mill workers and indigenous peoples in Mindanao, Palawan and other islands in the Visayas bear the brunt of innumerable negative effects brought about by the oil palm promise.

“Thirty years of the palm oil industry only proved broken promises of development, livelihood, and food security. The people’s access to food and ownership and control of land has been undermined by massive crop and land use conversion from staple food production to oil palm,” the unity statement read.