Ata-Manobo students: We only have pens and papers for our dreams

Related Story: Within sight | Account of an indigenous rights advocate

DAVAO CITY – Cousins Jenky and Jomar Malibato are eager to finish school and become teachers to help their community. Both of them are Grade 5 students at the Mindanao Interfaith Services Foundation Inc. (Misfi) Academy.

The cousins shared their dreams and fears with Davao Today as they hope the school can continue operating. 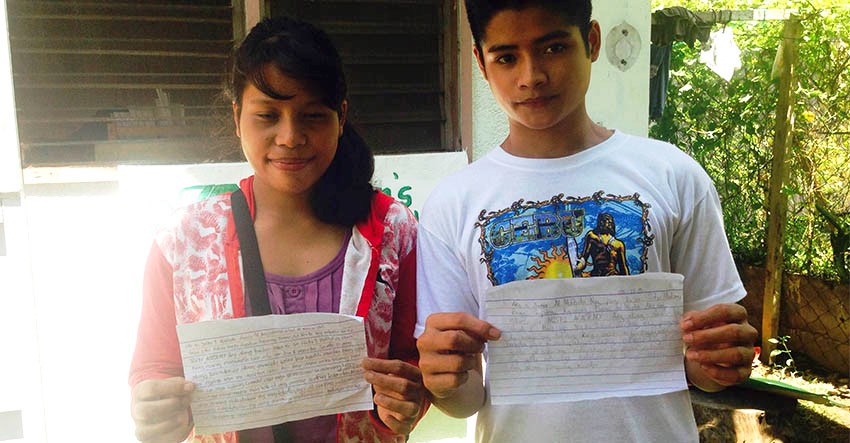 “We worry that our school will not reopen in time for school opening because the Alamara wants to stop the teachers from going to our school,” Jenky said. Alamara is the dreaded paramilitary group or militia armed and supported by the Philippine Army for years now. (It also Manobo term for widespread indigenous warfare)

Asked why their school should continue operation, the cousins replied, “because we want to finish schooling.”

“we cannot achieve our goals in life),” Jomar said when asked what the stoppage of their school’s operation would mean to them.

Jenky said the paramilitary group, Alamara, wanted their school to stop operation saying it is a school of the New People’s Army (NPA), the armed wing of Communist People’s Party that has been waging a revolution for more than four decades now.

But Jenky says the Alamara claim is not true. “We are not armed, we only have ballpens and papers. We are only armed with ballpen and papers),” Jenky said.

Unlike other students who will be lining up to their assigned classrooms when enrolment starts on Monday (May 25), Jenky and Jomar are still awaiting the holding of their recognition rites.

Two months before, on March 27, as schools everywhere in the country were holding their recognition and graduation rites, members of Alamara headed by Ongging Masaloon, stopped Misfi from conducting its “moving-up” ceremony (recognition) in Sitio Patil, Barangay Gupitan, Kapalong.

This May 21 the teachers and students trooped to the Department of Education office in this city for a dialogue between school administrators and Regional Director Atty. Arnold T. Escobarte.

At the dialogue, the Save our Schools Network along with the school’s Board of Trustees complained to DepEd that their schools in Kapalong and Talaingod, Davao del Norte are being attacked by the armed forces and Alamara, or Cafgu (Citizens’ Armed Forces Geographical Unit Active Auxiliary) as they are called by the local government unit.

In a letter handed to Escobarte, the delegation said they would want DepEd to conduct separate investigations for their complaint “and (to) execute necessary steps to address these atrocities.”

Jenielito Atillo, in an interview with Davao Today, admitted they can only work within their mandate which is providing permits for the school’s operation.

Atillo said they will still be sending a validation team in the area.

Jenky said, unlike other students, students in the community of Sitio Muling are poor.

“They don’t have food,” Jenky said. She said they eat only sweet potato (kamote) the whole day.

“We eat sweet potatoes for breakfast, lunch and until the afternoon,” Jenky said.

She said even their teachers eat only sweet potatoes.

She said sometimes, they buy rice for their teachers in Sitio Patil, but the Alamara would say the rice is meant for NPA fighters.

Jenky recalled an incident in the morning of November 28, when members of Alamara wanted to check their stuff as they were going back to Sitio Muling after buying rice, papers, ballpens, and other necessities for their teachers.

“The Alamara said they would like to check if what we were bringing are stuff of the rebels,” Jenky said.

She said they did not stop “the sun is too hot and we have a long way to walk.”

The Alamara got angry and fired at them.

Jenky said they want the concerned government agencies to check on the operation of the Alamara in the area so they can go back to school.

Meanwhile, Rius Valle, spokesperson of the SOS network, said these attacks happen not only in Kapalong, Davao del Norte, but also in other parts of the region.

From January to May 15, the SOS Network documented 13 incidents of attacks on schools that include military encampment and threats, harassment and intimidation of teachers and students in Talaingod and Kapalong, Davao del Norte province and Compostela Valley province affecting about 1,686 students and 42 teachers both in NGO-run schools and DepEd Schools.

“Recently we received reports of soldiers bribing paramilitaries and even Lumad leaders to destroy IP schools, especially in Talaingod and Kapalong,” Valle said.

“If they are really after the NPAs they should hunt them in mountains and not stay in our schools, harassing the students and teachers,” he said. Reposted by