Review: “Against The Tide” by the National Union of Peoples’ Lawyers

I burst out laughing at the first line of “Against The Tide: When Defenders Become Prey”. It was uncomfortable laughter.

A few pages later, reading the introduction by Josalee Deinla, this was my thought bubble: Change “lawyer” to “journalist” and we’d be publishing very similar books.

We are “killed, harassed and attacked”. We are called “enemies of the state”. Lawyers and journalists belong to two of the world’s most dangerous professions — outside of those that actually entail the bearing of arms.

To use a cliché, hokey but true, lawyers and journalists try to “comfort the afflicted and afflict the
comfortable”. Conversely, once swallowed up by the system, we could end up as part of the forces afflicting society, especially its most powerless sectors. 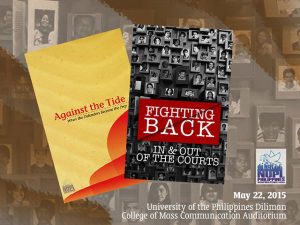 The powers-that-be, whose interests lie in silencing opposition to their schemes, see those who rush to aid their victims as pests.

Lawyers, journalists … add human rights workers, the religious, environmentalists, teachers, students, peasant and labor activists… any thing in this country that has to do with righting wrongs is a dangerous profession.

But there is a basic difference: we, non-lawyers, need you to bail us out of trouble. And a lot of times, as you extend aid to us, you get caught up in our travails.

The different stories featured in the book highlight a critical truth: To be a people’s lawyer, you need to get out of ivory towers and wade into the lives, live the lives of the people you serve.

Lawyers, including those from NUPL, write reams of documents that make my head ache with the convoluted language demanded by the courts. “Against The Tide” and its companion, “Fighting Back,” thank god, shun legalese.

The two books also serve up a critical reminder: Behind those thick case files are volumes of untold stories — the push and pull of social forces, systemic injustice, the tears, the fearful thuds of hearts, or screams of joy that accompany every legal twist and turn. I’m a certified news junkie, but these books rammed home the breadth of my ignorance on many important fields.

Truth telling is another thing, in different forms, that the law and journalism professionals do. But I will say, humbly, that you probably do it better. No successful defense or prosecution can take place without the raking up of truths – including inconvenient truths — concerning your clients and their tormentors.

Like in any case, these books distill a chaotic swamp of details into a tapestry that shows the pattern of conflict and struggle in this country.

“Against the Tide” and “Fighting Back” give a glimpse of what happens outside the courtrooms.
I am glad that you have published these books. Most of us do not appreciate the dangers that hound and haunt people’s lawyers. This country needs to understand the human cost of the victories we rejoice over — and soon take for granted: the pork cases, the power cases, the release of the unjustly arrested, redress for those tortured, holding butchers accountable, the fight for land or the struggle against the incursions that seek to wrest lands from the people.

Like some journalists, I am sure you — the ever young Edre and Neri included — must wonder now and then why, in god’s name, are you still tilting at windmills when your peers probably drive Mercedes Benzes and live in exclusive, gated communities.

When a colleague dies, you probably wonder… will the next bullet come my way?

And when you turn up your sleeves to take on what seems to be yet another lost cause in a parade of lost causes, you probably wonder if you aren’t better off auditioning for that masochist role in some S&M movie.

Which brings me to the question asked by a young colleague at Change org, my former group, at the height of the Mary Jane Veloso campaign.

She asked, what happens when after more than a thousand signatures, Indonesia still executes Mary Jane? Will that affect people’s enthusiasm in working for change –however lite the method, in this case a signature on a petition.

Thoughts of of Edre and Josalee and Donna and other lawyers flashed as I thought of my answer.

While we all fight for victory, the odds of it are not the only things that should determine whether we push or abandon struggle. Because, sometimes, the only thing that matters is doing the right thing, for the right reason, despite the odds.

Your two books are all about doing the right things despite the odds. That is a lesson for everyone, not just for starting lawyers.

These books are just a glimpse into a greater struggle. But this vast struggle would be much poorer without the brave souls of NUPL.

* The author is a veteran journalist and former chairperson ?National Union of Journalists in the Philippines (NUJP).She read this review during the public launch of the two books on May 22 in UP Diliman.