Bulatlat Contributors May 26, 2015 attacks on schools, MISFI, save our schools

DAVAO CITY — The recognition rites is a very important event for every parent, teacher, and student. It is like a license for one to move on to the next level.

The eighth Moving Up Recognition Rites of the MIFSI Academy was recently held in Davao City to recognize Ata Manobo children and mothers. These consist of children from kindergarten to grade 5, and mothers who finished the Literacy Numeracy Program levels 1 and 2. I have attended many such events but what I witnessed hit me like a spear on the chest. 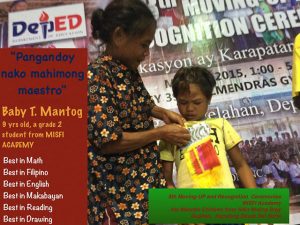 I was overwhelmed with mixed emotions. I could hardly conceal my tears. Tears of joy, anger, sadness, and rage.

Joy, because MISFI Academy could “finally” hold a ceremony for these mothers and children. I can see the same joy in Baby Tima Mantog’s eyes when he was awarded Best in Math, Best in Filipino, Best in English, Best in Makabayan, Best in Reading, and Best in Drawing. This was the same boy who told me that his ambition is to become a teacher so he could teach his fellow Lumads in that same school someday.

Rage, for why should these people have to find a different location just to hold this event when they could have just held it in their own place. The reason being that they were not allowed to do so by the elements from the 60th Infantry Battalion and Alamara, a paramilitary group of Lumads who were armed by the Philippine Army. History tells us that groups like this can be even more brutal than the army itself. In fact, these children and their parents even received threats of being chopped to pieces should they even attempt to disobey orders.

Last Saturday, 23rd of May, we had to rescue these parents and children and help them flee to Davao City just to hold the event. For them, this meant two days of travel on foot through hilly terrain, and a five-hour ride on mostly rough road. Because of the threats, they even had to hide on a cliff’s face just to avoid detection.

Eighty individuals, 43 of whom are children, had to squeeze themselves into a medium-sized truck. This truck had to be rented by the support group Save Our Schools because the parents and children do not have the ways or means to even buy a pair of slippers. Fifty-three were “finally” able to move up after all the exhaustion, travel fatigue, and possible long-term emotional and mental trauma.

Education is a basic right but with the current system, we even have to fight for or defend it. We always say that the youth is a nation’s hope but government education services never reach Lumad communities. This is what drives each parent, child, and concerned institutions to strive and build schools but these schools especially are not exempt from the state’s violence.

Education becomes a coveted prize that remains elusive to most Filipinos, as if it were a distant star that is always within sight but never possessed. Here for one second, gone for the next lifetime, parting as swift as a storm chases away a candlelight. However, storms end and always reveal the sun that gives us hope.