Tanduay workers fighting for what is due them 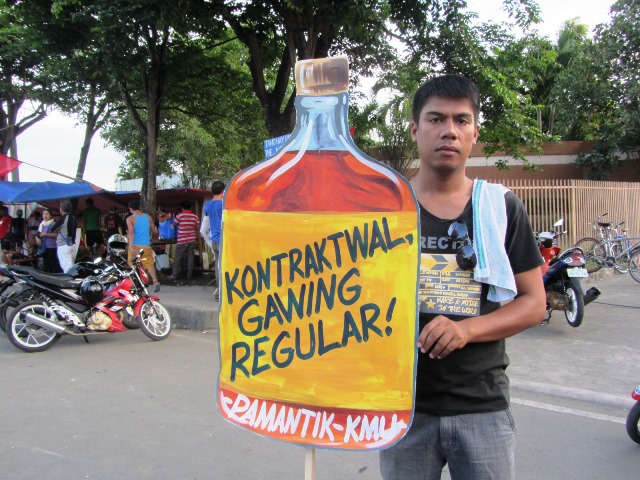 “We love our jobs that’s why we want to have security of tenure as regular workers.”

MANILA – Tanduay rum and spirits boast of more than 160 years “heritage”, tracing its beginnings to the 1850s. They manufactured spirits at first in Hagonoy, Bulacan and then, after a change of ownership, in Isla de Tanduay at the borders of Quiapo and San Miguel in Manila.

Its website gives a toast to its product’s history and awards, claiming that by now Tanduay is “a national icon,” the “spirits drinks of Filipinos,” a representation of “the nation’s true characteristics as a people.”

But these drinks that embody the nation’s true characteristics as a people are being mixed (or compounded as they call it), aged, bottled, quality-checked/assured, warehoused and delivered mostly by contractual workers. Contractual workers of Tanduay are paid less than the minimum wage, have to pay for personal protective equipment, and were told by their service cooperatives (functioning as labor contractors) that they have no right to form a union and when they do, they will lose their jobs.

A Lucio Tan-owned company had bought Tanduay Distillery in 1988, and since then, it began transferring its main production to Cabuyao, retiring its old-time regular workers in the process. The holding company that bought Tanduay changed its name into Tanduay Holdings and later renamed it to Lucio Tan Group, having consolidated under it the companies in the tycoon’s business empire. These include Asia Brewery (making beer products), Eton (real estate), Philippine Air Lines, Philippine National Bank, among others.

At the sidelines of a picket by the striking workers in front of the office headquarters of Tanduay in Ayala Avenue last week, a Tanduay worker under Global Pro service cooperative said he applied at the Quiapo plant but started working in the Cabuyao plant in 2008. Another worker, Dante Ragasa, began working at Tanduay Cabuyao in 2009, and continued working there as ‘permanent’ contractual also under Global Pro service cooperative until May 15.

The transfer of its production in Cabuyao became official and complete only by 2013, after the last workers in Quiapo plant who resisted the retrenchment finally accepted their severance pay.

As such, more than two decades since Lucio Tan bought Tanduay and began implementing what most workers’ groups describe as wage-slashing, union-busting contractualization, the workers in Tanduay are beginning to organize and demand change.

Nine in ten workers are contractuals


Its members said most stages of Tanduay production are being handled by “contractual workers” hired by Global Pro and HD, which are listed as labor cooperatives but are functioning more like manpower agencies answering to Tanduay Distillers’ labor-only contracting (LOC) needs, an activity which is considered illegal. The workers believe that these cooperatives were close to if not dummies of the Lucio Tan Group.

The 397 longtime “contractual workers” are almost evenly divided between Global Pro and HD. The former is owned by Alejandro Lukban who also supplies manpower to other companies in Lucio Tan’s business empire. The latter is owned by Gregorio Hemedes, said to be the brother of Cabuyao Mayor Isidro “Jun” Hemedes.

Tanduay workers have registered a labor association this April and asked the Department of Labor and Employment to inspect the establishment for violations of labor standards and occupational health and safety.

The workers assert that they have the legal ground to demand their regularization on the job, and with that, to earn the appropriate pay and benefits.

On May 5, the labor department issued its findings saying that employees of the service cooperatives HD and Global Pro “were directly reporting to the supervisor of the Tanduay Distillery, Inc., and that the “employees of the service cooperatives were assigned at the production area which is necessary in the operation of the principal’s (Tanduay’s) business.”

Anse Are, president of the Tanggulang Ugnayan Daluyang Lakas ng Anakpawis sa Tanduay Distillers Inc. (TUDLA), said this notice of results from the labor department is a solid basis for proving that Lucio Tan practices the illegal Labor Only Contracting (LOC). In turn, this is their basis for calling for their regularization on the job directly with Tanduay Distillers, Inc. as employer.

While Tanduay management and the labor agencies have received their copies of results of inspection from the labor department on May 5, TUDLA got their copy only on May 28, when they were already 10 days into their strike and some 50 of their members have sustained injuries from dispersal attempts by Asia Brewery’s security.


On the same day, a business newspaper came out with a report quoting the management of Tanduay Distillers Inc. as saying the workers on strike and currently maintaining a picket outside Asia Brewery Complex gate 2 are not employed by Tanduay, and as such, it said, “there is no legitimate strike at the Cabuyao plant.”

Tanduay management also introduced its plant manager, Richard Teng, and human resources officer, Irma Alintahin, as mere “observers” in the few hearings mediated by the labor department that it attended.

The heads of the labor agencies had reportedly requested for more time to disprove they are engaged in LOC.

Ragasa said that Global Pro had used to just make them work in Tanduay continuously without a contract signing and ENDO (or end of contract). He has worked that way for six years in Tanduay. In HD, he said the workers have 5-month contracts that are renewed repeatedly.

He said they only saw a contract on April when the management got wind of workers’ organizing, and Global Pro suddenly started making them sign a service agreement dated from January to December this year.

“We don’t believe (Global Pro’s reason that the contract is an ISO requirement) since we’re already ISO-certified since 2014 and they didn’t have that requirement then,” Ansi Are, president of TUDLA, told Bulatlat.com.

These days the striking workers are awaiting the labor department’s resolution of their case. They hinted that it will have far-reaching consequences, as Tanduay also has factories in Cagayan and Bacolod – with the workers there also from Global Pro and deserving also to be regular workers of Tanduay.

No letup in struggle for regularization

Are of TUDLA told Bulatlat.com they will not leave the picketline until they are regularized on their job in Tanduay.

“We are happy with our work, we just want to be regularized. We love our job which is why we have worked here for years,” said Ragasa. He especially praised the close relationship among workers – “we’re like brothers to each other here. Tanduay is like a second home.”

The workers just wanted that home to be more healthful, to have better ventilation for example so their mixture of spirits don’t linger in the air-conditioned air.

“Because we work in an enclosed space, there is a bad effect on our health when they turn off the exhaust fan to keep the air-conditioned temperature low. But the smell of mixed up rums is harmful over a long period of time,” a filler operator for six years in Tanduay said.

Production workers think they can also do with personal protective gears as bottles break or explode at work.

The strikers’ main picket is now at Gate 2 of Asia Brewery Complex. It is littered with shards of broken bottles and various sizes of rocks, which, they said, the goons and guards had thrown at them whenever they held a program.

Estelito Tuibuen, TUDLA spokesperson, told Bulatlat.com how their opponents behind the brewery gates had bombarded the tall lamp post near the picketline with water, until it sparked and leaked and conducted electricity toward the striking workers.


He shared also how they were encountering difficulties in getting their situation broadcasted and reported by mainstream media, since, as one media outfit told them, the Lucio Tan Group of companies is one of their big clients in advertising.

In Cabuyao, the union said, their appeals for help from the local mayor seemed to have fallen on deaf ears, with the mayor being related to the owner of one of the labor contractors in Tanduay.

Both Global Pro and HD, meanwhile, seem to be trying to gather paper evidences to disprove the LOC findings in Tanduay.

He added that even the checklist form, packaging, monitoring, material issuances are all from Tanduay and not of Global Pro and HD.

Among the contractuals of HD, Are said, Tanduay supervisors and managerial staff, and not the HD coordinators, evaluate them at every end of their five month contracts. He also said the two agencies have changed their attendance form – Tanduay used to be printed on it, now it’s Global Pro and HD.

He reiterated that their demand for regularization is “just” and according to law, and that it would not beggar the second richest billionaire from the Philippines if the workers producing the spirit drinks of Filipinos are receiving at least the mandated minimum wages and protective equipment.

The Lucio Tan Group has reported that in the first three months of this year, Tanduay Distillery contributed P75 million ($1.7 million) to its overall profits.