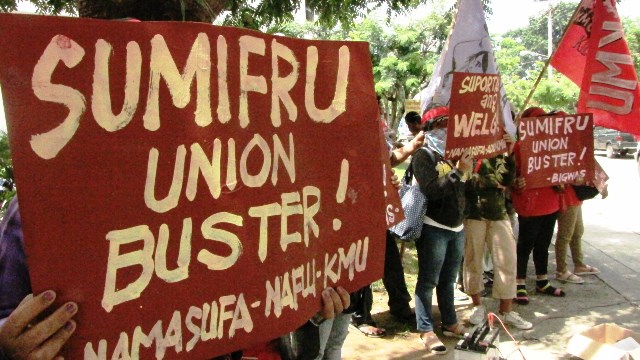 DAVAO CITY – Dismissed workers of a banana company warned that they will call upon the members of their association to launch a wider strike should the management of Sumifru (Sumitomo Fruit Corp.) fail to reinstate them.

Vicente Barrios, union president of the Nagkahiusang Mamumuo sa Suyapa Farm (United Wokres of Suyapa Farm or Namasufa), said other workers under their association are “just one word away to launching their own strikes.”

“(Our association) Bigwas (Banana Industry Workers and Growers Against Sumifru) covers all of the banana plantation workers of Sumifru. We are ready to launch a strike to support each other,” said Barrios in an interview during their protest Tuesday June 16 at the Sumifru office in Davao City.

“Last June 1, PP (packing plant) 90 was padlocked because there was a dispute between the landowner and Sumifru. On June 3, we were told to report for work to a mini-packing plant MPU 230-A,” said Barrios.

But on June 8, Barrios said “company guards refused to let us enter.”

The next day, the Namasufa declared a labor strike as they said the company’s move was a form of “union busting”.

On June 12, workers from Packing Plant 92 Workers Union also joined Namasufa’s strike while other workers from packing plants 95, 370 and 340 created work slowdowns “to pressure Sumifru to resolve the issues.”

“We have strike funds and are currently gathering material resources should we proceed with the strike,” said Barrios.

Barrios said other unions of their federation Naflu (National Federation of Labor Unions) under the national labor group Kilusang Mayo Uno (May First Movement) have been providing them with “other means of support including legal and technical support.”

Barrios said that based on their data, the land dispute between Sumifru and the landowner resulted from “Sumifru’s refusal to pay the owner’s demand for an increase.”

“That is a very small amount. Sumifru can pay that with their one day profit,” he said.

Barrios said they have “suspicions that perhaps the dispute is just made up so the management will have a reason to dismiss us.”

“We have a pending case in the Supreme Court regarding the employer-employee status with Sumifru. If we win, then all the other unions will also be established as such,” he said.

Barrios said that if they win the case but the workers are already dismissed, the decision will be useless.

On March this year, workers of the 11 packing plants of Sumifru in Compostela Valley protested the “piece-rate wage scheme” which was resolved after the signing of a “compromise agreement” with Sumifru in April.

“The compromise agreement stipulates that parties should not take retaliatory actions against parties, but Sumifru did this to us,” Barrios said.

He said the workers will not stop in fighting such schemes. “We have won many victories because of our unity, we will not let our efforts end there,” he vowed.

In its website, Sumifru said it has a “vast Mindanao plantation, which stretches over an area of 10,000 hectares” in the Philippines.

Sumifru said it “is a significant local employer, providing about 20,000 manual labor jobs to earnest and diligent Philippine workers.” Reposted by