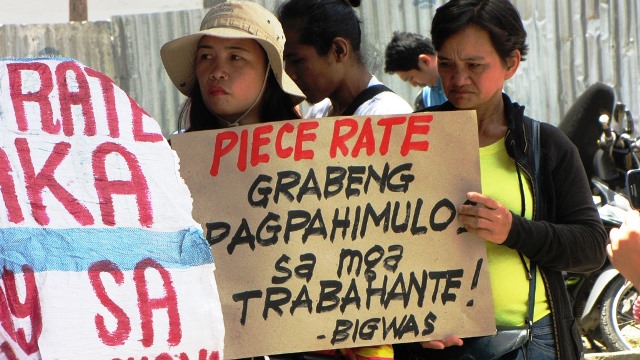 “We are already earning little and working more than 12-hour shifts. Now under the piece rate system, we earn even less.”

DAVAO CITY – Banana growers and workers of Japanese fruit giant SUMIFRU (Sumitomo Fruit) in Compostela, Compostela Valley are up in arms this week against the recently-implemented piece rate system scheme which they blame for the diminution of their wages, in violation of the Labor Code. The piece-rate scheme was implemented since March 23 this year by SUMIFRU.

Sumifru (Philippines) Corporation is in the business of sourcing, production, shipment and marketing of fresh fruits. It mainly exports quality Cavendish bananas, pineapple and papaya. Its investment in Mindanao began on 1970, and, to date, it has plantations in three regions covering 14,000 hectares. It has a totally integrated system of production with a research center, a cold chain, packaging plants, loading port and shipping facilities.

Sumifru exports to China, Japan, Korea, Middle East, New Zealand and Russia. The Davao City Chamber of Commerce and Industry regards Sumifru as the number one player in its chosen markets in quality and volume. The company is trying to expand further its plantations in Mindanao. Last year, the New People’s Army accused it of “land grabbing” 5,000 hectares in two towns and two cities in Bukidnon, leading to the loss of farms and livelihood for indigenous peoples and farmers. The revolutionary army said most of the farmers and indigenous peoples “have become slaves for the multinational as wage-earners.” 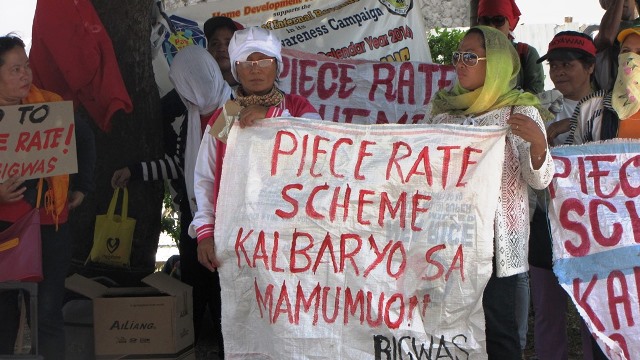 In its Compostela packing plants, Sumifru was paying its thousands of workers an hourly rate before it implemented their piece-rate system. With the shift to piece-rate, the workers’ income was slashed by half and in some cases, it went even lower than the mandated minimum wage of P307.00 ($6.88) for agricultural workers in the region, the spokesman of the workers’ group said. Affected are some 5,000 regular and contractual workers in SUMIFRU’s 2,700-hectare area in the province.

As a result, workers from several packing plants in Compostela have launched protests against the piece-rate scheme. The workers are united under a newly formed alliance called Bigwas (Banana Industry Growers and Workers Against SUMIFRU). On April 10, they picketed the SUMIFRU Corporate Office at the Pryce Tower, Davao City to register their opposition to the piece-rate system.

Joel Cuyos of Packing Plant 98, spokesperson of Bigwas, called the piece rate system “a brazen attack on workers’ wages and the concrete expression of SUMIFRU’s greed.” He condemned SUMIFRU for putting at risk the survival of workers’ families as the piece-rate system cuts down their wages further.

“The piece-rate system is a form of exploitation that SUMIFRU has designed to squeeze more profits out of the workers. We are already earning little and working more than 12-hour shifts. Now under the piece-rate system, we earn even less,” said Cuyos.

Cuyos estimates that the piece-rate system has cut down the workers’ income per week by almost P2,000. He showed the cut from data their union recorded in Packing Plant 90, where they monitored the wage difference under the hourly and piece-rate payment schemes from March 23 since it was implemented to April 1.

The workers called on SUMIFRU to revoke the piece-rate system immediately and revert to the hourly scheme. They asked the Department of Labor and Employment (DOLE) to intervene on this “clear violation of labor standards and workers’ constitutional rights.”