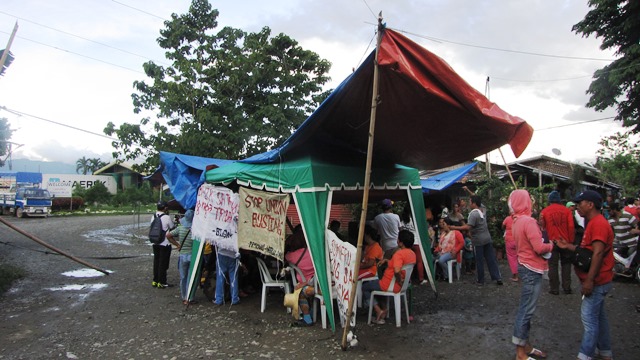 “The illegal lockout and dismissal affecting packing plant 90 workers this month is clearly an act of retaliation by Sumifru and a violation of the April 22 settlement.”

MANILA – Barely three months since the workers of a Japanese-owned banana export company succeeded in pushing their management to drop the implementation of piece-rate wage scheme, the same management abruptly closed one of the packing plants and dismissed around 177 workers. The move is viewed as an act of retaliation done en masse against the workers who took part in resisting the piece-rate scheme.

On June 1, the said Packing Plant 90 was reportedly padlocked due to an alleged rent dispute between the landowner and Sumitomo Fruit Company (Sumifru). On June 3, the Packing Plant 90 workers were told to report for work on a nearby mini packing unit (MPU 230-A) pending resolution of the rent issue between the company and the landowner. But on June 8, company guards suddenly turned the workers away at the gate upon management’s orders.

On March 23, Sumifru unilaterally began implementing the piece-rate payment system of wages in its packing plants in Compostela Valley. The alliance Banana Industry Growers and Workers Against Sumifru or BIGWAS, a cluster of banana packing plant unions, was formed in March in protest of the piece-rate payment scheme that slashed workers’ wages by at least 50 percent.

On April 22, the workers’ successive mass actions forced the suspension of the piece-rate scheme and the dispute was resolved through a compromise agreement.

The agreement stated that, among others, the piece-rate scheme is to be immediately revoked and there will be “no retaliatory actions against parties.” 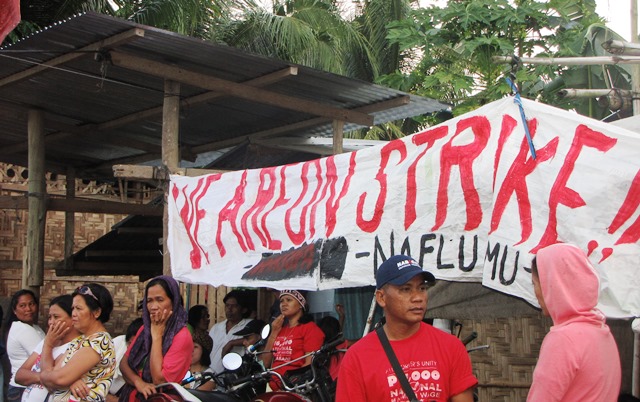 But according to Vicente Barrios, president of Namasufa-Nafku-KMU, the illegal lockout and dismissal affecting packing plant 90 workers this month is clearly an act of retaliation by SUMIFRU and a violation of the April 22 settlement.

In a statement emailed to the media last weekend, Barrios said the unions will not back down despite the Sumifru management’s repeated attempts to bust them.

As of this writing Monday June 15, Barrios said the strike continues and that negotiations with the management bore no positive results yet.

The workers of the packing plants on strike and the other banana packing plants holding mass actions are no stranger to Sumifru’s attempts at union busting and retrenchment.

Barrios said Sumifru has tried and failed several times to bust the unions in the banana packing plants in Compostela. In 2012, he said, Sumifru dismissed all workers of the two packing plants after accusing the workers of having deliberately damaged the produce with metal insertions into pieces of bananas.

But Sumifru failed to prove this and the workers were reinstated. Now, the same union members were fired a few months after they joined protest actions against wage cuts via new piece-rate payment system.

“Sumifru’s incessant scheming shows that it is an incorrigible union buster and deserves the workers’ and the people’s utmost condemnation,” Barrios said.

Barrios and the union of workers in the banana company have been struggling for better work conditions and benefits since 2000s. He had narrowly survived an attempt on his life in December 2006 while he and seven fellow unionists were on their way to work at the banana company. One of his colleagues, Jerson Lastimoso, died instantly of multiple gunshot wounds. Since 2004, the military had reportedly been pressuring Barrios to stop his union activities and to dissociate from KMU. In 2012, in hopes to put an end to threats on his life and union activities, Barrios and other union leaders had also sought ILO investigation.

Joel Cuyos, Bigwas spokesperson and president of the union at Packing Plant 95, described Sumifru as a dyed-in-the-wool union buster and traitor. He also said it has persistently attempted to destroy workers’ unity in Compostela by circumventing labor laws and finding ways to break unions.

“This illegal lockout is only one of SUMIFRU’s many crimes against the workers and just like how we defeated the piece-rate system, we will defeat this union busting scheme,” Cuyos said.

Sumifru is adjudged “the number one player” in sourcing and exporting fruits such as bananas to China, Japan, Korea, Middle East, New Zealand and Russia. Starting operations in the Philippines in 1970s during Martial Law, it now has plantations in three regions covering 14,000 hectares. It has a totally integrated system of production with a research center, a cold chain, packaging plants, loading port and shipping facilities. It is also trying to expand to Bukidnon.