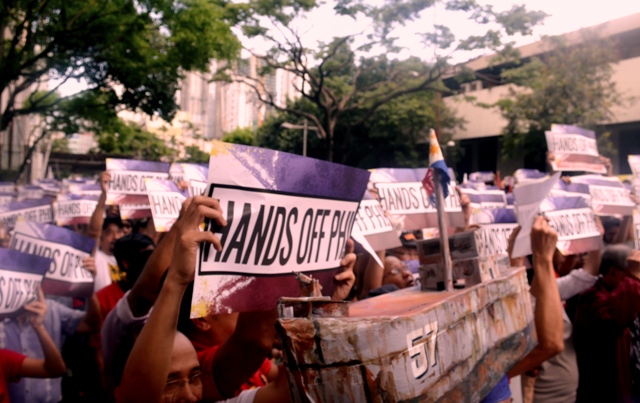 “We are not pro-Chinese, we are not pro-American, we are pro-Filipino, and we are ready to stand pat to our territory, assert our national sovereignty, and fight to retain what is ours.”

MANILA – The Philippines is fast losing its territorial waters to the Chinese, and patriotic Filipinos need to step up to the plate to defend it, as a united, independent nation.

“We are not pro-Chinese, we are not pro-American, we are pro-Filipino, and we are ready to stand pat to our territory, assert our national sovereignty, and fight to retain what is ours,” said Bayan Muna partylist Rep. Neri Colmenares during the discussion.

The jampacked forum, held on June 25 at the Pamantasan ng Lunsod ng Maynila (PLM), kicked off P1nas’s public awareness campaign on the country’s dispute with China. It was attended by more than 500 undergraduate and law students, leaders and members of different progressive groups.

Suggestions to resolve the issue were for “people power,” building a self-defense force, and uniting with the international community — far from depending on foreign powers for military aid, which was how some perceived the simultaneous joint naval war games the Philippines had with the US and Japan this week.

“We should organize a people’s movement, because what has become international, has also become domestic,” said former Senator Leticia Shahani, a convenor of P1nas, and a native of the coastal town of Lingayen in Pangasinan province. She lamented that China’s “bullying” had affected the livelihood of many fisherfolk communities. Recently, the Chinese Coast Guard used water cannons in chasing away a group of Filipino fishermen.

“I think we should reply to that watercannon, don’t you think so?” Shahani said. The crowd answered with a resounding ‘yes.”

Shahani proposed a people’s show of force, such as a “fluvial parade by women.”

Various actions are also set next month to drum up public interest and participation. On July 3, fisherfolk led by the Pamalakaya will deliver a letter to the Chinese consulate, to complain about how they are being kept away from their fishing grounds by the Chinese Coast Guard.

The main speaker at the forum, Supreme Court Senior Associate Justice Antonio Carpio, said the Philippines needs to strengthen its capability to be able defend its territory and waters.

“The obligation of every nation that wants to be free, is to maintain a credible self-defense force,” said Carpio. In the past years, the SC justice had been presenting his studies on China’s aggression to generate public concern.

“Nobody is foreseeing a war with China,” Carpio said. “China will not attack Luzon, or Palawan. But China will get resources within the nine-dashed line,” he said.

In his presentation, Carpio roused the audience as he presented pictures of China’s reclamation, construction and military build-up in the reefs within the country’s exclusive economic zone (EEZ) in the West Philippine Sea.

Carpio said China’s military strengthening is aimed at pushing its national boundaries in the South China Sea, encroaching on other countries’ EEZ, and claiming even the high seas, which are part of the Commons, or the heritage of all mankind.

“We will be left with only a sliver of exclusive economic zone,” Carpio said, adding that China can require all countries to ask their permission to be able to fish in the area. The Philippines should keep up with its southeast Asian neighbours, which have all began building up their self-defense. “Even Singapore has a first-rate submarine,” Carpio said.

The Philippines, however, has a strong case against China, which it had charged with violations of the Unclos, said Carpio. China, which is a signatory to Unclos, like all other disputants in the West Philippine Sea, insists on its nine-dashed line basis, which goes against the Unclos’s definition of territorial and sovereign waters.

“Our only weapon is Unclos…we can only beat China in an Unclos tribunal, where warships, patrol ships don’t count, and it is based on the Law of the Sea,” Carpio said.

In case China refuses to recognize a tribunal decision invalidating its claims, Carpio suggests that the Philippines file a resolution at the UN General Assembly, like what Nicaragua repeatedly did in asserting the resolution of the International Court of Justice which ordered the US to pay damages to Nicaragua.

“We will not be alone, because a lot of countries are being prejudiced by this nine-dashed line,” Carpio said.

Colmenares said that Filipinos must enjoin the international community in invalidating China’s claims, because a favourable ruling for the Philippines will benefit other countries in the world whose EEZ and territorial waters will be kept respected.