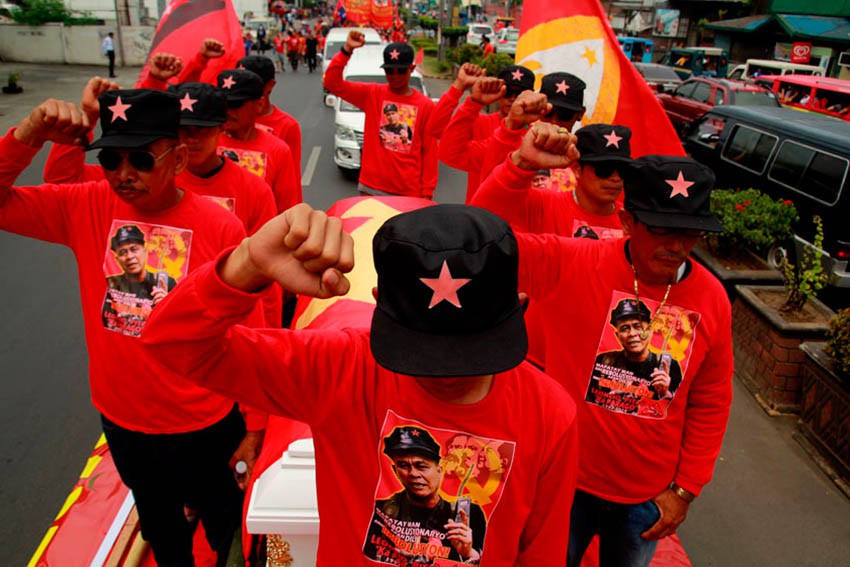 DAVAO CITY – The attendance of an estimated 10,000 individuals in the funeral march of a fallen rebel commander is a “reflection” of the New Peoples Army’s strength of mass base here, a prominent militant leader said.

Former Bayan Muna partylist representative Satur Ocampo said that while the thousands who came to the Friday burial of Leoncio Pitao would be considered “many”, he said “it is but a reflection and perhaps, just a fraction of what has been called the mass base of the NPA”.

Ocampo said that based on his experience, this “mass base perform comprehensive task but its reflection of strength is sometimes felt during deaths of well-known leaders.”

Ocampo was formerly a business editor of a national newspaper before he became one of the founders of the underground National Democratic Front.

The Philippine Army annually says the NPA mass base is “weakening in strength” and that its regular forces are “dwindling in numbers.”

The NPA and human rights groups also accuse government that it intensifies its “fascist campaigns of suppression” through “torture, threats and extrajudicial killings” to weaken support to the revolutionary movement.

“But that is shattered by the mass base in occasions like this when they show up and defy fear and show revolutionary strength,” Ocampo said.

Ocampo said “this also shows how prepared the mass bases are to sacrifice for the revolution in case the state gets back at them for attending Parago’s burial.”

But Ocampo added that “This is not yet that mass base,” because in events like this, the movement is limited due to its location and logistical requirements.”

Ocampo said the Army “gets suckered by their own mistakes of giving wrong estimates of supposed NPA strength.”

The caravan of trucks and buses, including the truck which carried Ka Parago’s remains, held a condemnation program outside the Army’s Eastern Mindanao Command (Eastmincom) headquarters where mourners splattered red paint on its walls Friday morning.

The Army said Ka Parago and his medic Vanessa Limpag, alias Ka Kyle, were killed in an encounter in Paquibato District on June 28.

The NPA, however, said the killing of Ka Parago and Ka Kyle is a violation of international humanitarian law, saying Ka Parago had been “weakened and taken ill”, while Ka Kyle “was unarmed and had identified herself as a medic and raised her hands to surrender.”

At 1:00 pm Friday, the caravan unloaded mourners to mount what Davao militant leaders say is “one, if not the biggest, funeral march for an NPA leader in the country’s history.”

Ocampo said the sheer number is “comparable to the funeral march of Ka Roger Rosal.”

Ka Roger is the spokesperson of the Communist Party of the Philippines who died in 2011 because of an illness.

“They are somewhat different in the functions they performed. Ka Parago is the rebel ground commander, while Ka Roger is a spokesperson, but the support of the mass base is the same,” Ocampo said.

The revolutionary underground’s flag of colors led the march followed by the funeral car. A jeepney blasting a song composed for Ka Parago came next, then the truck carrying Ka Parago’s remains with his honor guards followed.

Next in the march was Ka Parago’s family, then the large group in formation was led by Ocampo and known activist-leaders.

The funeral march took the main thoroughfares of Davao City going to the Davao Memorial Park.

Bystanders who seemed awed by the big number of marchers came out of their workplaces to take a glimpse of the march. Some took the opportunity to document it using their video cameras and cellphone cameras.

Some bystanders say they could not believe the news of Ka Parago’s death until his remains passed before them during the march.

Meanwhile, a group of graffiti artists carried a stenciled face of Ka Parago and the text “Sampa sa NPA (join the NPA).” They painted it on walls and posts as the march was ongoing.

Many were not shy to chant “long live the New People’s Army.”

At about 2:00 pm, a short liturgical program was initiated for Ka Parago inside the crematorium chapel.

The family was given time to get their last glimpse of him before his body was cremated, but some mourners also went out of their way to bid him goodbye. Reposted by