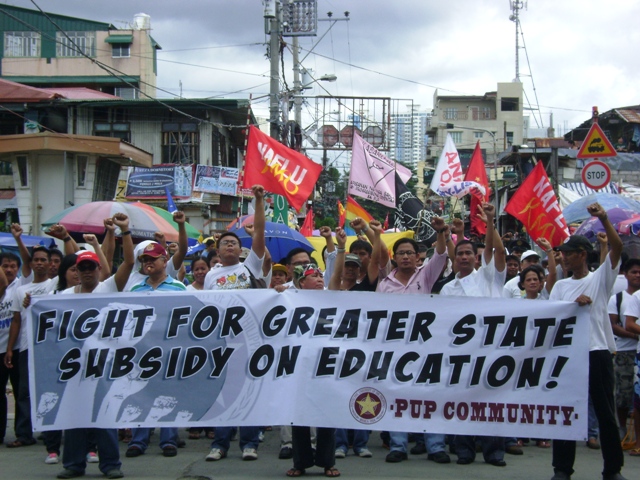 “The onslaught of commercialization and education deregulation under the Aquino administration has driven not one, but many students to desperation and even death. This is Aquino’s real legacy to the Filipino youth.”

MANILA – Expensive cost of education, unemployment and more out of school youth. This is what the youth has endured under President Benigno S. Aquino III, said progressive youth groups.

“Education, employment, standard of living – all of these aspects took a turn for the worse under Aquino’s five-year rule,” said Kabataan Partylist Rep. Terry Ridon.

He said tuition rates and youth unemployment are at their highest, the gap between the rich and the poor continues to widen, while wages remain stagnant if not decreasing. “These are the facts that Aquino will undoubtedly omit in his last State of the Nation Address (SONA) on Monday.”

“Education is a public good, but ironically under this regime, it has become a private good because of the commercialization schemes and policies of Aquino, such as tuition and school fees deregulation, and the Roadmap to Public Higher Education Reforms (RPHER)”said Sarah Elago, National Union of Students in the Philippines (NUSP) president.

Data from the Kabataan Partylist showed that in Aquino’s five years in office, tuition increased by an average of 108 percent at the national level, from P257 ($5.67) per unit to P574 ($12.66). The rate of increase is even higher in the National Capital Region, at 143 percent, the group said.

Elago said that Aquino did not act to stop the perennial tuition deregulation in the country. She said Aquino has not only tolerated private school owners and state universities and colleges (SUC) to accumulate more profits through “exorbitant, redundant and dubious fees” but made it his state policy to increase tuition and other school fees.

The NUSP data shows that there is an almost 10 percent increase in tuition and other school fees every year.

Ridon said 1.5 million school-aged Filipino youth are out of school.

“The onslaught of commercialization and education deregulation under the Aquino administration has driven not one, but many students to desperation and even death. This is Aquino’s real legacy to the Filipino youth,” Ridon said.

The 2013 Functional Literacy, Education and Mass Media Survey (FLEMMS), meanwhile showed one in every 10 or about four million Filipino children and youth was out of school in 2013.

The 2013 FLEMMS is a nationwide survey covering around 26,000 sample households excluding Region VIII due to typhoon Yolanda.
The survey said insufficient family income was cited as reason for 19.1 percent of those who stopped schooling. This was second to entering into union or marriage, which was the reason for 23 percent who quit school.

The high cost of education was fifth reason, at nine percent.

The groups also hold Aquino accountable for the death of Kristel Tejada and other students’ death allegedly because they can no longer continue with their studies.

Other than Tejada and Rosanna Sanfuego, the groups said Jhoemary Azaula student of Eulogio Amang Rodriguez Institute of Science and Technology and Nilna Habibun of Zamboanga Sibugay, reportedly committed suicide after being told that they have to stop schooling, because their family cannot afford the tuition.

“This last State of the Nation Address of Aquino is the dead end of his crooked road and crooked administration. Having stolen education from the people and pushed the youth to the edge, he is not a president but a cold-blooded thief and murderer,” said Elago.

The youth leaders also decried the massive youth unemployment in the country, coupled with the policy of contractualization and labor export.

Official figures from the Philippine Statistical Authority’s (PSA) January 2015 Labor Force Survey released in March, showed that there are about 4.1 million Filipinos unemployed as of January 2015. Of these, about 3.3 million are youths aged 15 to 34.

The PSA also noted that one in five unemployed Filipinos is a college graduate.

“We have to consider that these are conservative government figures that do not consider those who work part-time or work from home as unemployed. Still, the figures as they are reveal the worsening jobs crisis in the country, especially in the ranks of the youth,” Ridon said.

Ridon also said that contractualization also intensified under Aquino’s term, with contractual workers now comprising majority of the labor force in the country.

“Coupled with depressed wages and the soaring cost of living, this worsening jobs crisis results to widening poverty in the country,” Ridon said. “If anyone really benefited from Aquino’s programs, that is the richest of the rich,” he said.

Ridon said that instead of creating jobs in the country the government solely relied on labor export policy which drives millions of Filipinos abroad to find jobs. “This policy is further intensified by the implementation of the K to 12 program, which is fundamentally designed to produce skilled workers for export,” Ridon said.

Meanwhile, Charisse Bañez, League of Filipino Students national spokeswoman said the youth and students in the Metro, Central Luzon and Southern Tagalog are set to march with the Filipino people on Aquino’s last SONA. Youth and students from other parts of the country are also gearing up for similar protests in main cities and towns, the group said.