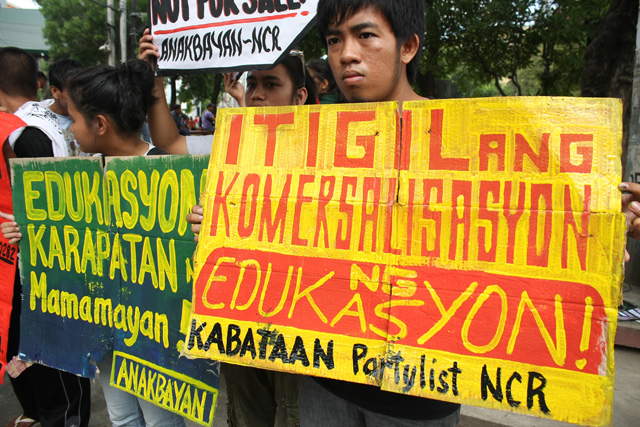 “The Aquino government’s irresponsibility in providing free and quality education to all pushes Filipino students and youth to abandon their dreams, even to the point of taking their own lives.”

MANILA – Two weeks before the second death anniversary of Kristel Tejada, the college freshman who killed herself for being unable to afford tuition, another student ended her life apparently for the same reason.

Rosanna Sanfuego, 16, a freshman student of the Cagayan State University (CSU) was found dead on Feb. 27, hanging by a rope around her neck at her home in Abulug town in Cagayan. Sanfuego had reportedly decided to stop her studies after being unable to take her exams due to unpaid fees.

The National Union of Students of the Philippines (NUSP), expressed sympathy and condolences with the grieving family of Sanfuego. The student union and its member-student councils also called for justice for Sanfuego.

The group said that while the CSU administration boasts of zero tuition in the university since 2009, it has been found that the cost of undergraduate tuition has been redistributed to miscellaneous or other school fees (OSF), ranging from P2,000 ($45) to P4,000 ($90).

“Interviews with CSU students during the NUSP and Kabataan Partylist’s student convocations in the different campuses of CSU last year revealed that, though zero in tuition, majority of the almost 40,000 CSU student population cannot afford the cost of other school fees,” the group said in a statement.

Sarah Elago, national president of the NUSP said remote campuses of CSU also showcased how the inadequate government subsidy has resulted in the increase and imposition of other school fees, poor facilities, less plantilla positions for faculty and staff, and higher student dropout rates.

The NUSP said there was no adequate increase in budget for state universities and colleges (SUCs) such as CSU in the past five years under President Aquino.

Elago said that even weeks before Sanfuego’s death, a technical committee in CSU a that it was tasked to study the reimposition of a base undergraduate tuition fee.

“Clearly, Rosanna’s untimely death is a clear and strong signal that CSU students, like any other student of SUCs cannot take any reimposition of tuition and any increase in other school fees.”

Femie Galapon, NUSP Cagayan Valley vice chairperson said that Sanfuego’s death reveals that Philippine education is commercialized and repressive. “The Aquino government’s irresponsibility in providing free and quality education to all pushes the Filipino students and youth to abandon their dreams even to the point of taking their own lives.”

The group said that on March 13, on the commemoration of the second death anniversary of University of the Philippines-Manila student Kristel Tejada, different youth groups will hold a national day of walkout against tuition and other fees increases.

“We hold the Aquino administration accountable for stripping the likes of Rosanna Sanfuego, Kristel Tejada and other students of the right to free and quality education. We do not only grieve for Rosanna. We seek justice for Rosanna, Kristel and the Filipino youth,” Galapon said.