In praise of the effigy makers 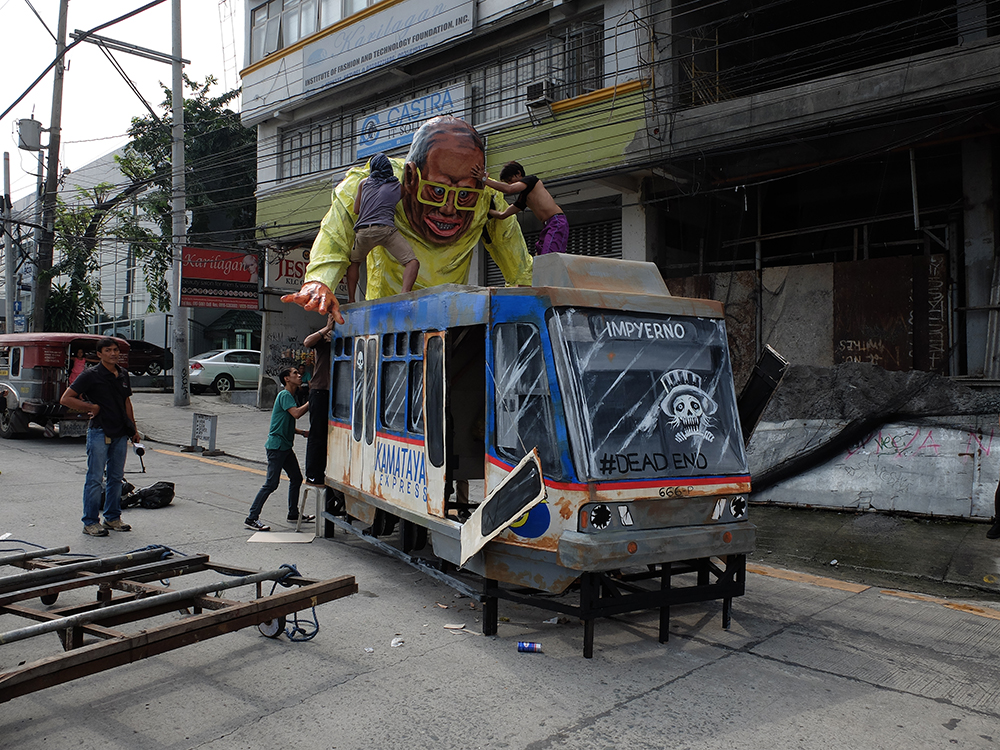 Effigies have been featured and written about through the years that they have been made the centerpieces of the main protest rallies when the Philippine president delivers his or her State of the Nation Address. Some even ask should effigies be replaced already as a main symbol of these protests. 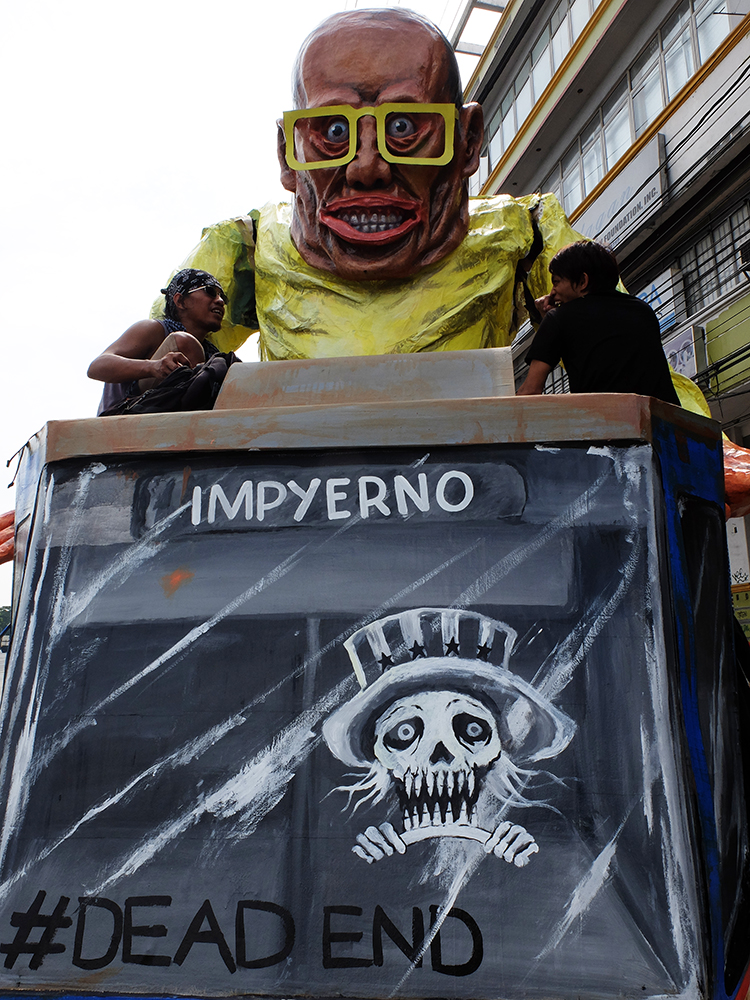 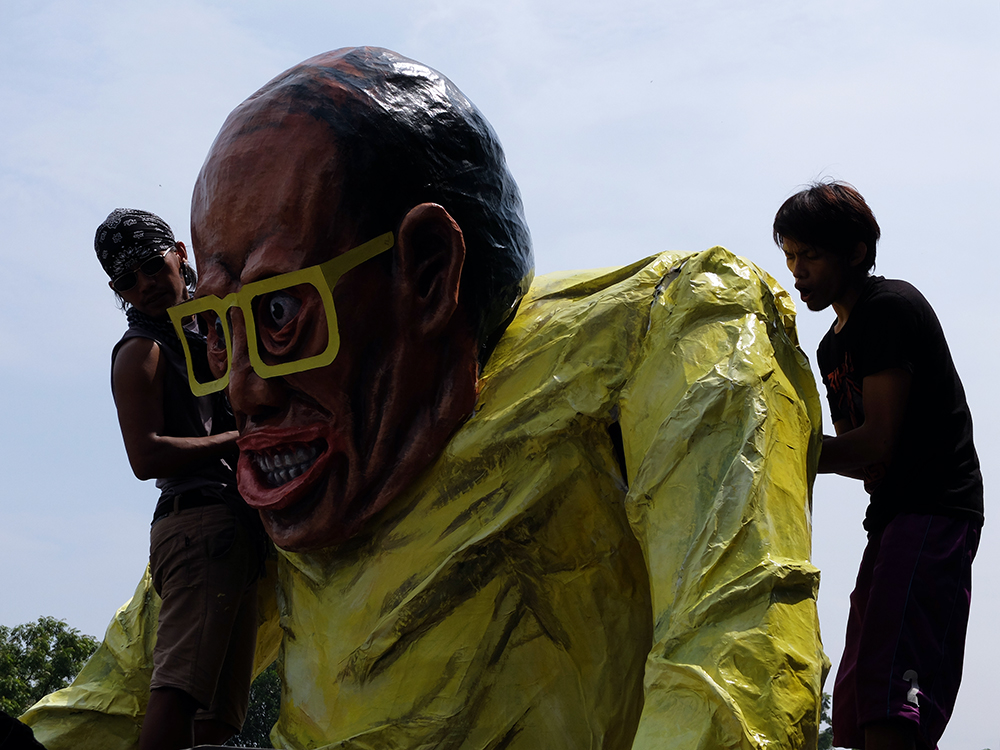 But to ask such is not taking into account that each effigy is different. Many old-time Ugat Lahi members have already been replaced by new and younger members. So have been the carpenters who construct the frames that hold them up. While some processes have been passed on each batch has their own styles of creating, not to mention that each effigy shows a different theme. Each is unique. 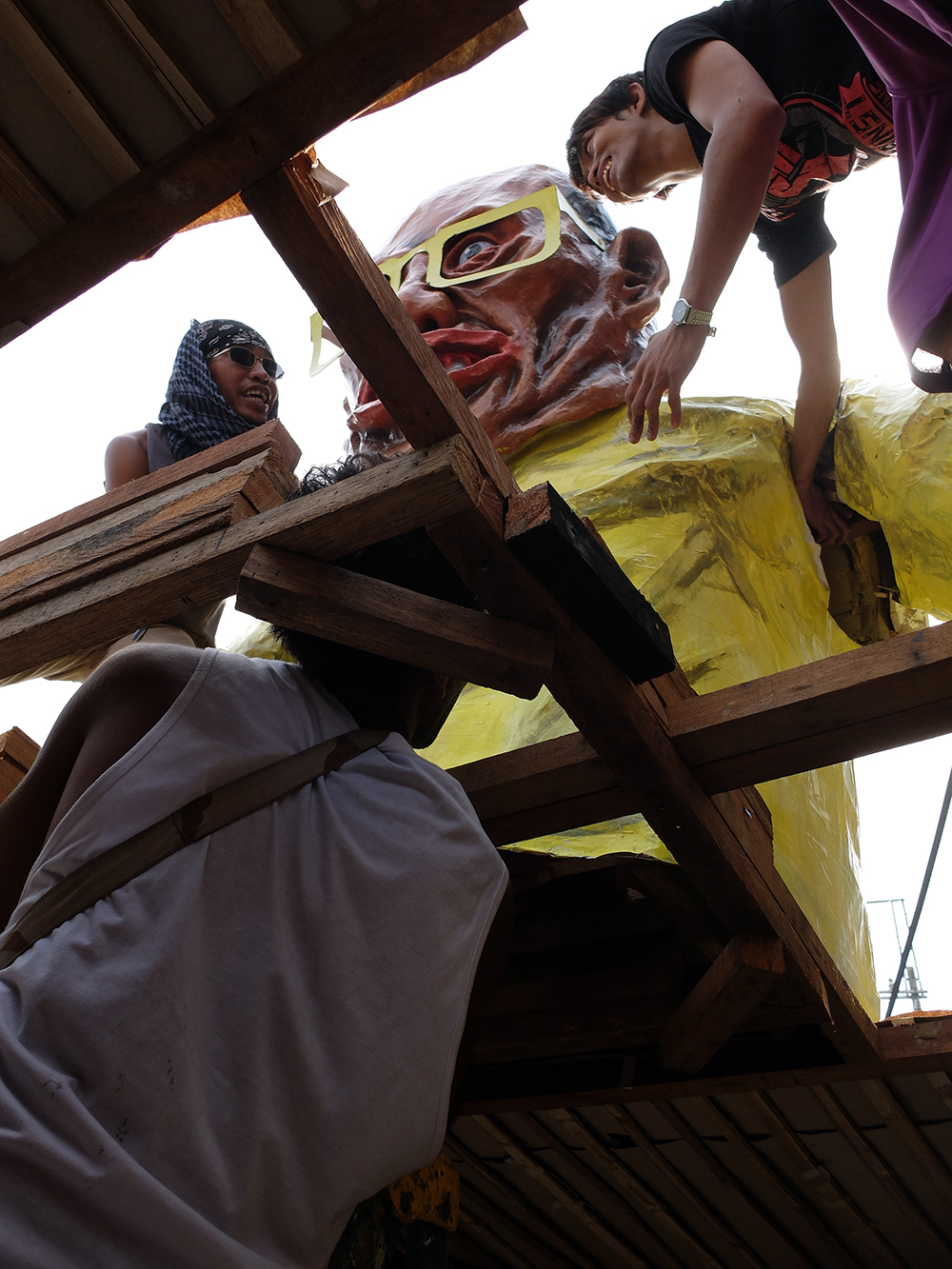 The creative process is an act of love. As each creation slowly takes form the artists love it more. Every piece of craft paper that is glued on the creation is a piece of the artists’ mind and heart. Each brushstroke is a measured effort that takes into account the many years they spent to master the craft. It takes strength for the artists of Ugat Lahi to create effigies year after year knowing they would inevitably be burned, until only cinders and ash are left. 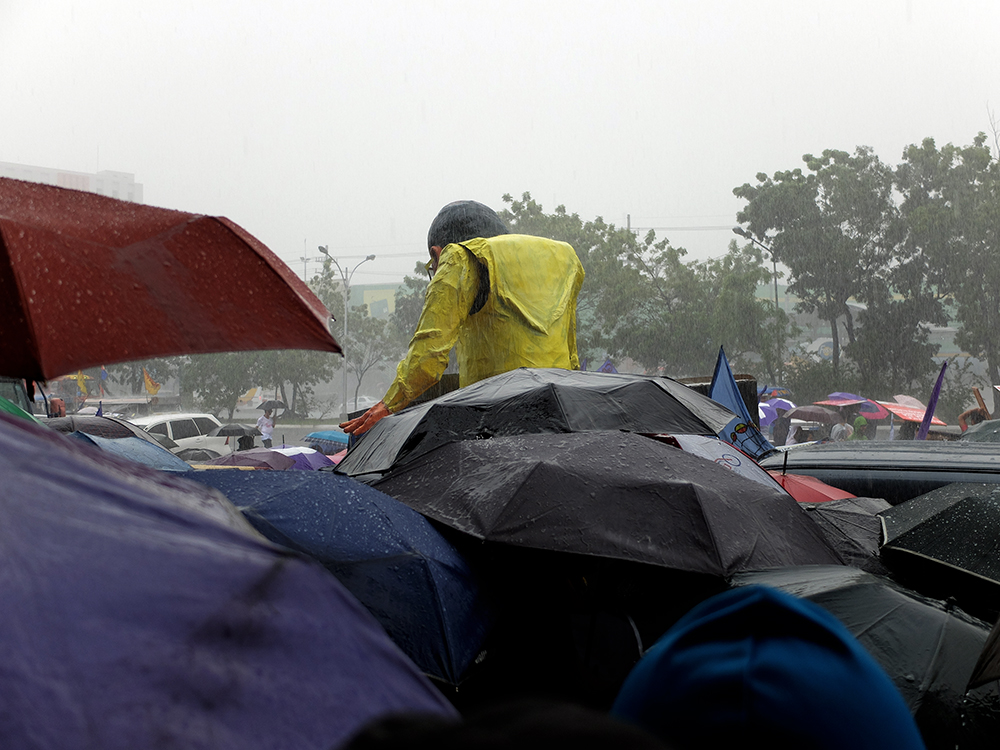 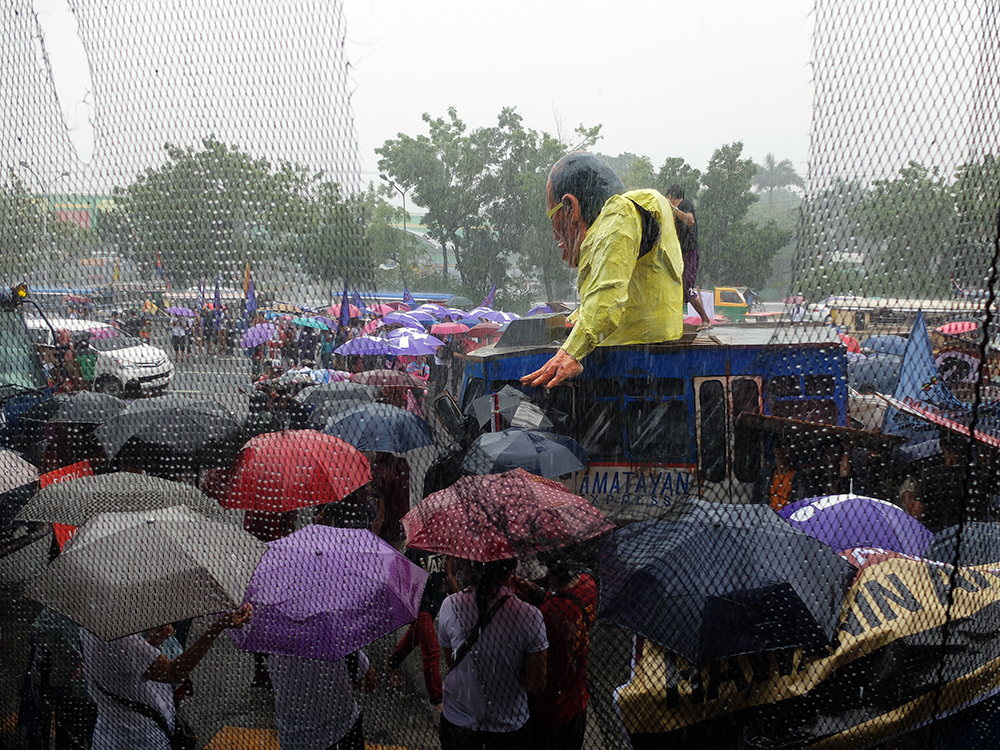 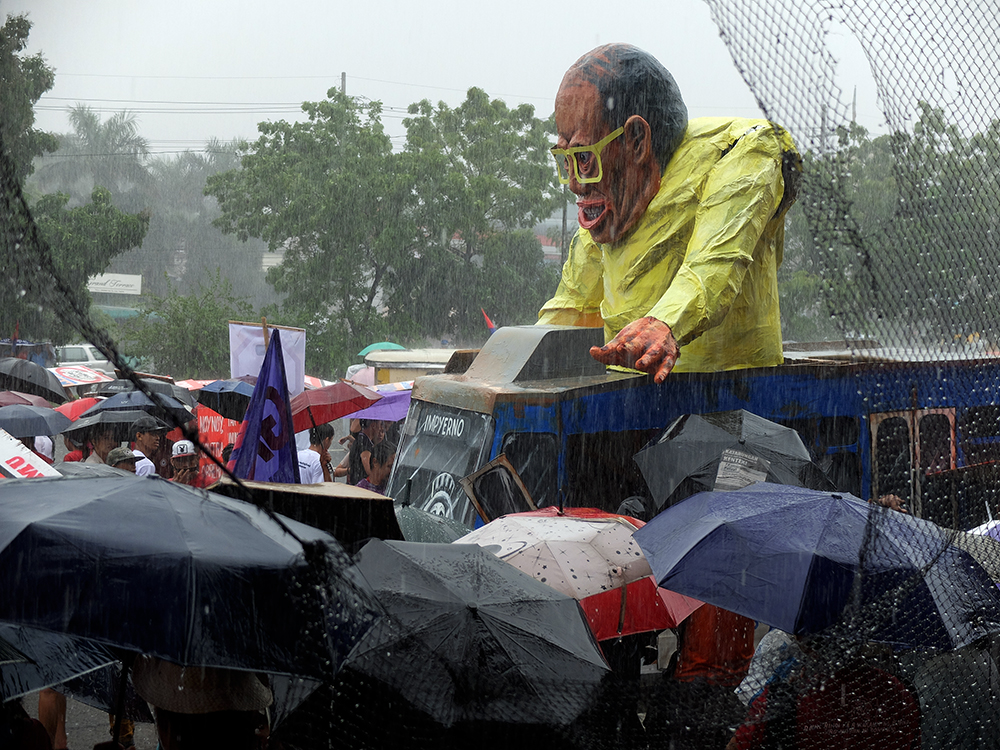 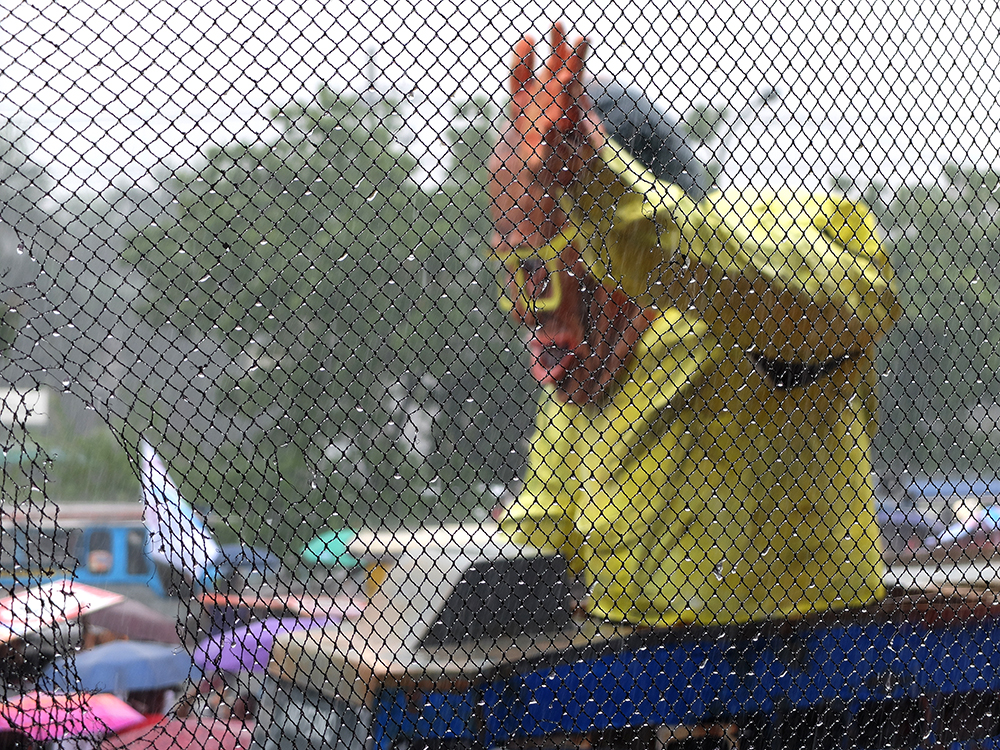 As it had been in some recent years it rained hard during this year’s People’s SONA. The artists—sleepless and tired the past week—scrambled to save the crumbling effigy. They did not dare leave it to the mercy of the pounding rain and struggled to wrap it with some protective sheet. It may represent a hateful leader to them and the mob, but the lovingly crafted image must survive until its ultimate fate. 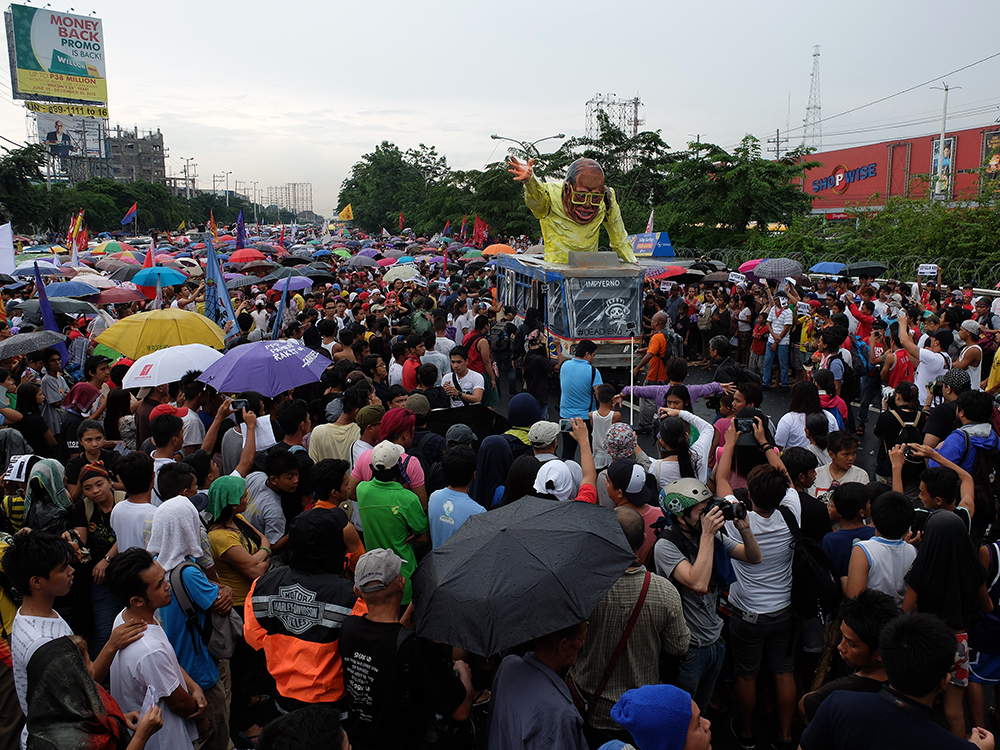 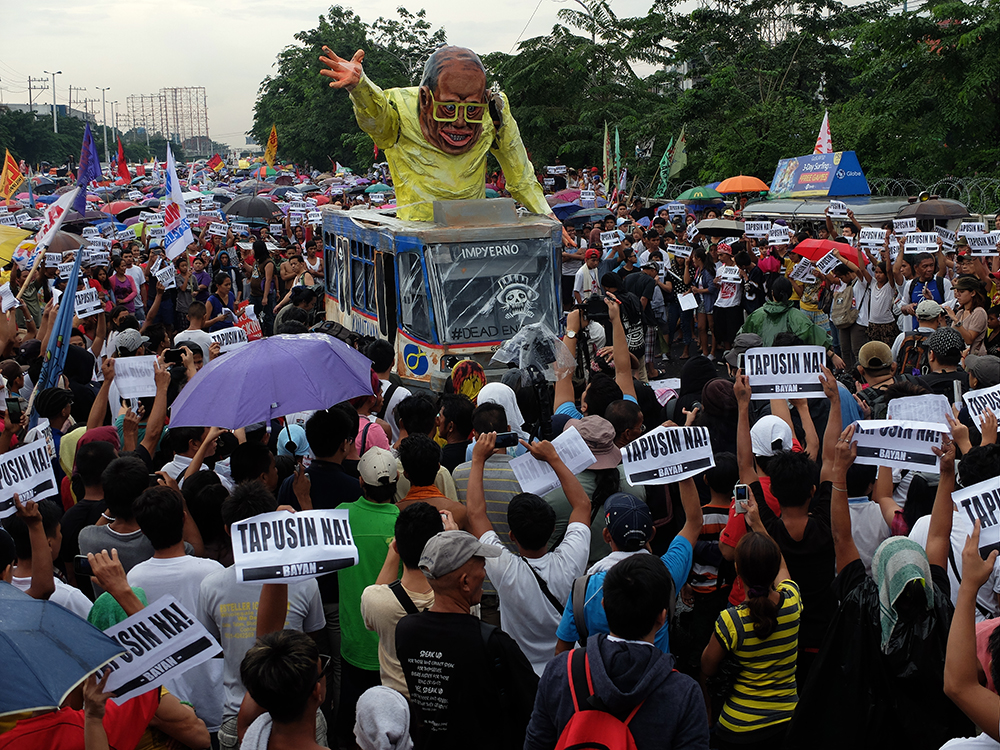 The throng, for its part, shows it respect–not to the person who the image represents, but the artists who built it. They help protect it from the police and firefighters who may wish it ill. They help pull it into place, so it watches them conduct their program. They have their pictures taken with it, happy that it was, as always, finished on time and that it joins them again in one of this country’s biggest annual political exercise. 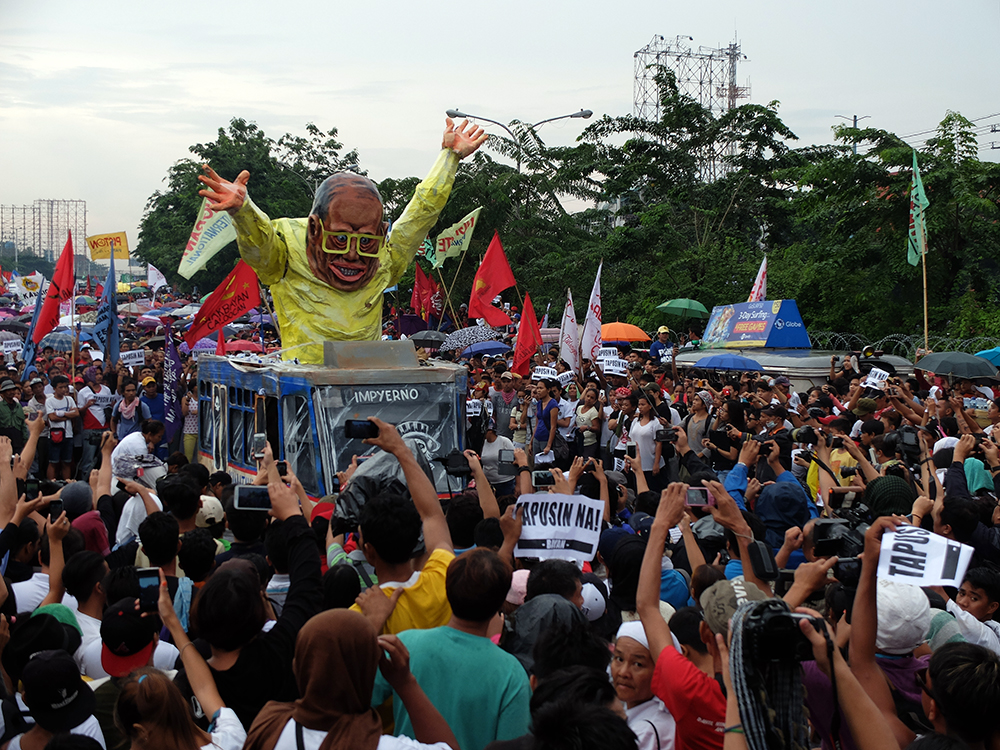 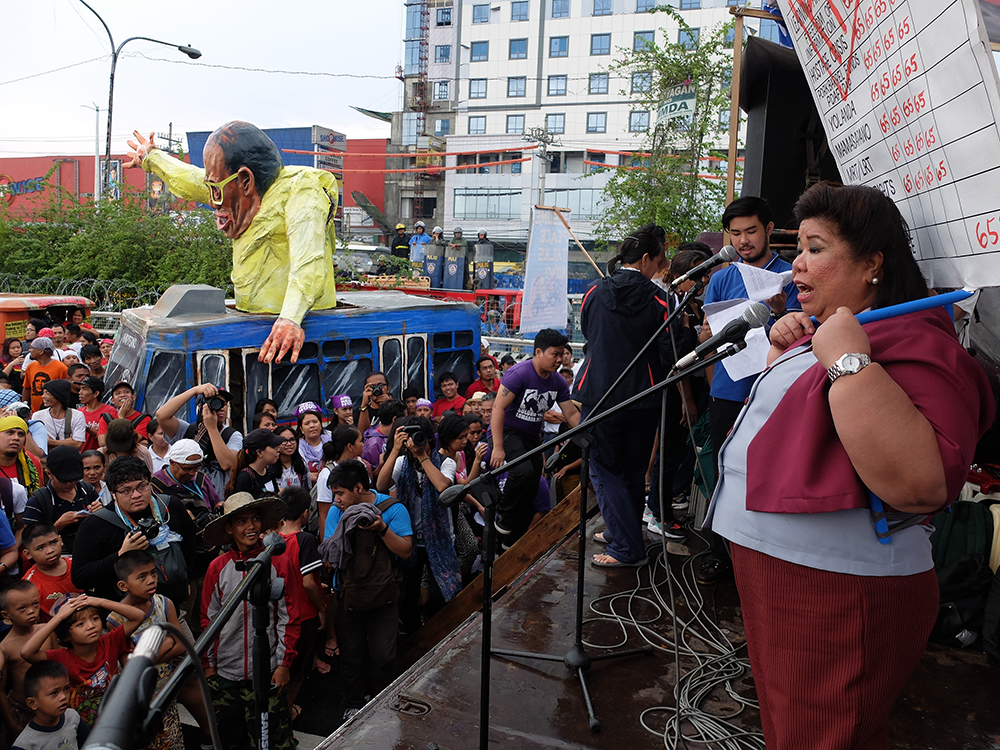 It always comes to the inevitable end, however. As the president addresses the country inside the Batasan complex, Ugat Lahi artists pull the effigy to the center of the multitude to be burned. They themselves pour kerosene on it to ensure it burns, despite being soaked by the rain. They pause and then stand aside to let people’s leaders torch it. 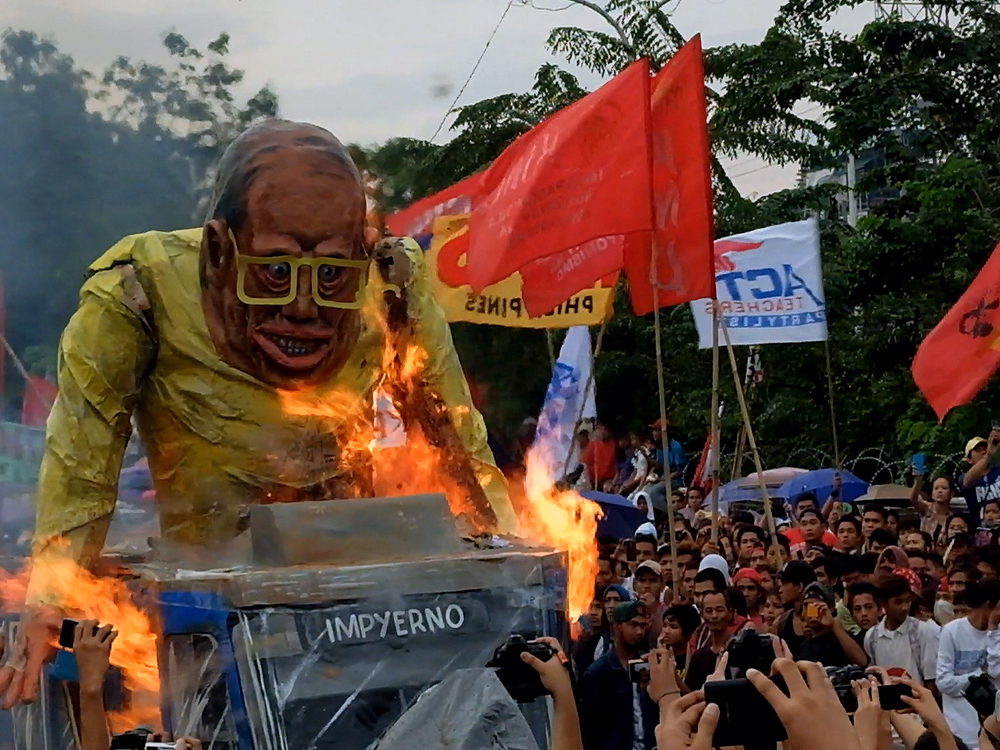 One imagines they may be used to it by now. But, again, that is not taking into account the long hours they spent to create it. It must always feel painful somehow. 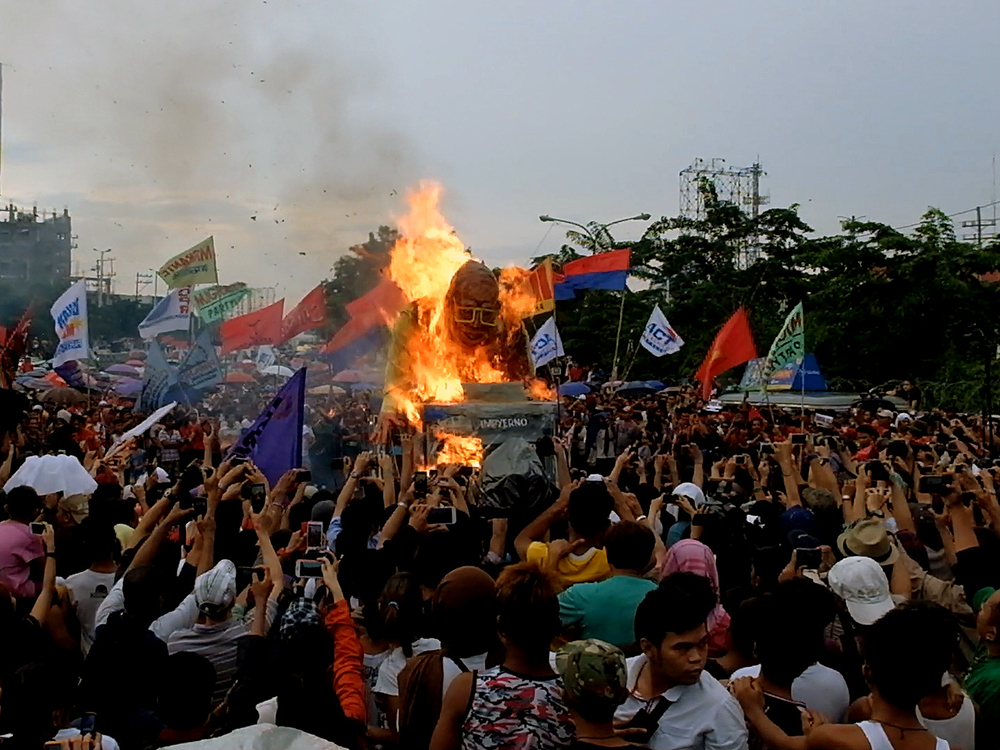 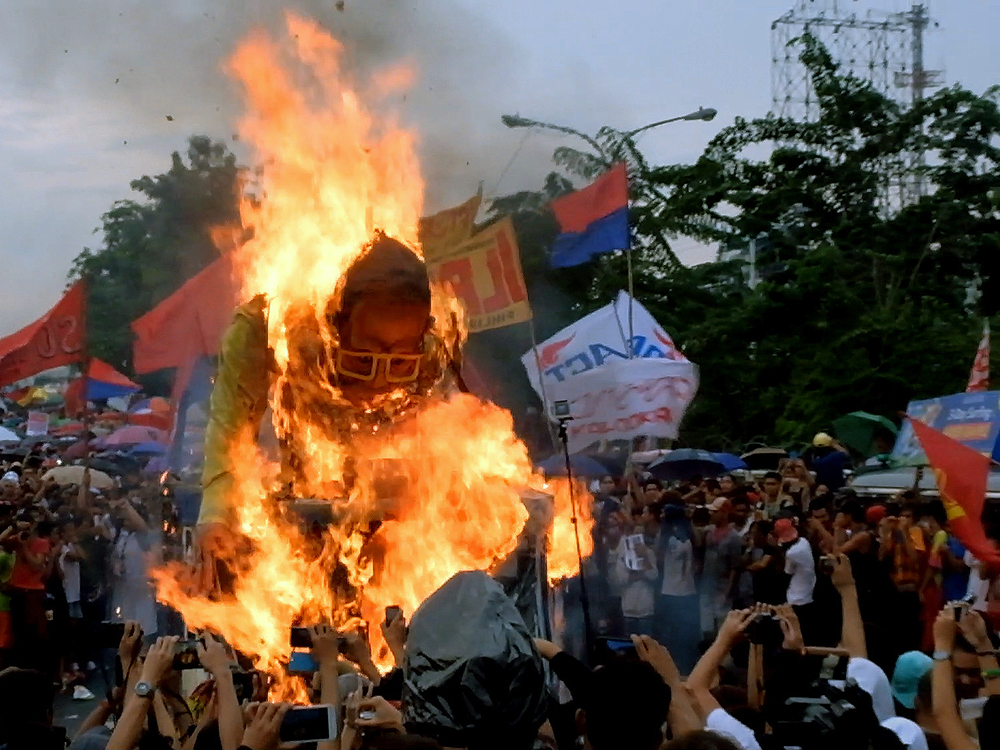 But theirs is not art for its own sake. Their craft and creation is a witnessing of their own political beliefs that art must serve a greater purpose. In creating effigies and burning them within hours of their completion they help the people show the nation’s real state and what must be done. 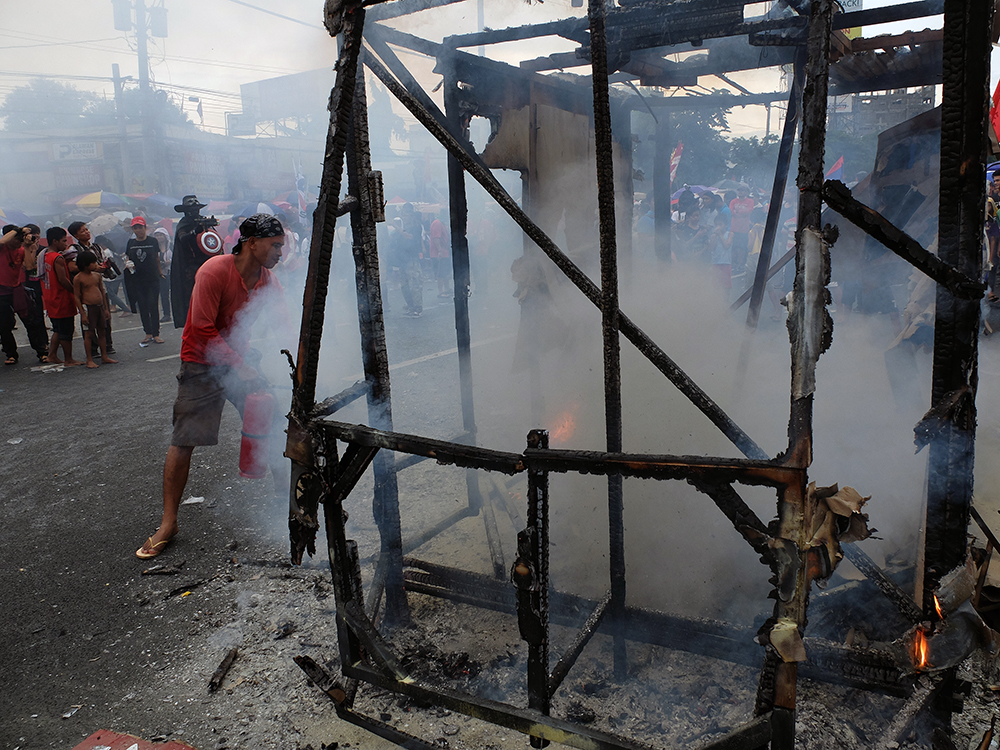 This year, they may also be further consoled by the fact that the effigy that just burned is the last they will make of one BS Aquino.

Text and photos by Raymund B. Villanueva
Kodao Productions