You Are Here: Home → 2015 → October → 15 → Attacks on environmental activists, indigenous peoples, and the destruction of the environment

Attacks on environmental activists, indigenous peoples, and the destruction of the environment

Recent Bulatlat.com articles show an alarming trend in the country and the world: the murder, harassments, and forced evacuation being committed against environmental activists and indigenous peoples.

The series of articles on Lumad killings and the harassment and surveillance on an environmental activist show why the Philippines is the deadliest country in Asia for activists and indigenous peoples defending land rights and the environment.

The 2014 study, “Deadly Environment” by Global Witness, a non-governmental, non-profit organization established in 1993 in London, reveals an alarming intensification of killings of environmental activists during the last decade. Global Witness documented 147 killings in 2012, a sharp increase from the 51 killed in 2002. From 2002 to 2013, there were 908 recorded killings. 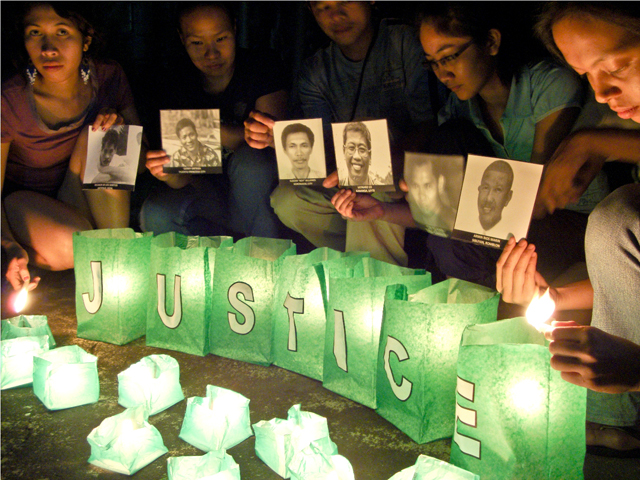 “On average two people are killed every week defending their land, forests and waterways against the expansion of large-scale agriculture, dams, mining, logging and other threats.”
– Global Witness

“In 2012, indigenous leader Jimmy Liguyon was shot dead in front of his family in the Philippines, reportedly for refusing to sign away his land to miners. José Cláudio Ribeiro da Silva and his wife Maria were assassinated by masked gunmen in Brazil in 2011 after having denounced the encroachment of loggers into their forest reserve. In 2012 in Cambodia, 14-year-old Hen Chantha was shot dead by military police that were evicting her village to make way for a rubber plantation.”

And the killings continue.

These are only the recorded killings. There could be more as Global Witness observed that monitoring is problematic in Africa, Myanmar, Central Asian countries and China.

Added to this, the report recorded only the killings. There are other violations being committed against environmental activists and indigenous peoples, such as the harassment and surveillance committed against Clemente Bautista, national coordinator of Kalikasan People’s Network for the Environment, which was mentioned above, the forced evacuation of 3,000 Lumad in Mindanao, and the filing of strategic lawsuit against public participation(SLAPP) cases against environmental activists by mining companies.

These are happening even as sustainable development is the main goal of the UN up to 2030, and the world is focused on the UN conference on climate change (COP21) happening in Paris from November 30 to December 11, 2015. The past several conferences failed to reach definitive agreements on the much-needed radical reduction of carbon emissions. In its place were commitments for funding for carbon trading.

Perhaps, the most ironic case to date recorded by Global Witness happened in Honduras:

“In Honduras, the second most dangerous country, 93 peasant farmers in the fertile Bajo Aguan region have been murdered since 2010 amid land conflicts with agribusinesses expanding African palms plantations that are traded globally on the lucrative carbon credits scheme.”

What these cases reveal is that the destruction of the environment and the attacks on environmental activists and indigenous peoples are not isolated cases. These are inextricably linked and are happening all over the globe because it is deeply rooted in the extractive system of production and the frenetic race for profits under capitalism.

“Every effort to protect and improve our world entails profound changes in lifestyles, models of production and consumption, and the established structures of power which today govern societies.”