‘Lakad Bonifacio’ | Reliving the time of the Katipuneros

A group of history buffs took a walk down the streets of Manila this weekend to pay tribute to the Father of Philippine Revolution, the Great Gat Andres Bonifacio.

MANILA – Imagine yourself transported back to the late 18th century, surrounded by poverty, hunger and oppressive Spanish colonizers. Now, imagine yourself walking in the unpaved, dusty streets of Manila, holding secret meetings, distributing copies of an underground publication, plotting the overthrow of the oppressors.

This was what “Lakad Bonifacio sa Binondo” (Bonifacio walk) tried to relive, as it visited places in Manila that had relevance to Andres Bonifacio and the Kataas-taasang, Kagalang-galangang Katipunan ng mga Anak ng Bayan, or KKK.

“Lakad Bonifacio” is a seven-stop, two-hour walk which starts from Tutuban, Divisoria, the birthplace of The Great Plebeian, up to Binondo Church, where he wedded Gregoria de Jesus, or “Oriang,” the Lakambini of the Philippine Revolution.

Held on Nov. 28, the short tour is on its second year, and visited various historical markers around the city of Manila, in celebration of Bonifacio’s birthday on Nov. 30.

The tour was an experience both inspiring and sad, as many of the historical spots have become private properties installed with token markers that barely give importance to the significance of the sites in Philippine history. Participants in the tour lamented how government has failed to preserve physical structures linked with the heroes of the revolution.

The streets of Manila is dotted with old Spanish-era houses, now crumbling, dilapidated, and ignored, just like the homeless street dwellers who pick trash and discarded food to survive, the cargadores and vendors who earn hand-to-mouth income – scenes not so different from the time of Bonifacio, when revolution was rife. History has indeed repeated itself, and the reminders that there were many brave Filipinos who fought oppression and exploitation are being erased, from the physical surroundings and the people’s mind.

Lakad Bonifacio was organized by Bahay Nakpil-Bautista, the Katipunan museum in Quiapo which is run by the descendants of Gregoria de Jesus and Julio Nakpil. After Bonifacio was killed by Emilio Aguinaldo’s men in 1897, his widow, Oriang took sanctuary at the house of Katipunero and musician Julio Nakpil, whom she eventually fell in love with and married.

In Quiapo, Viola pointed out Quinta Market, along Pasig River, where Bonifacio and other Katipuneros sat on boats, pretending to sell goods while having secret meetings. They would then row their boat upstream to proceed to another meeting. Quinta Market was demolished by the Estrada city administration this year as part of its privatization of public markets.

Not much have change from Bonifacio’s time, except maybe for the buildings, denser population and a different form of oppression and exploitation. 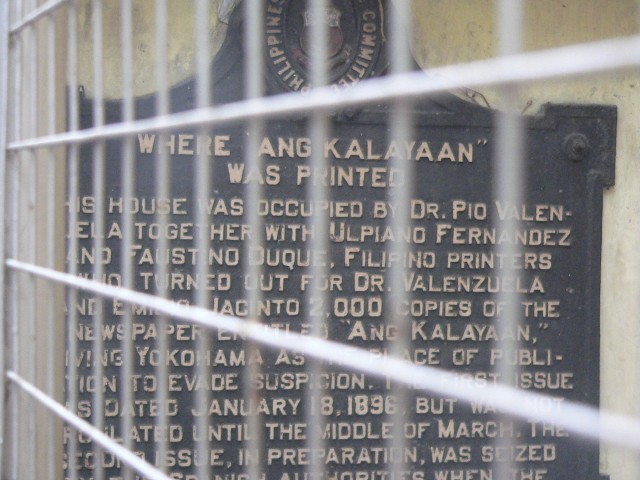