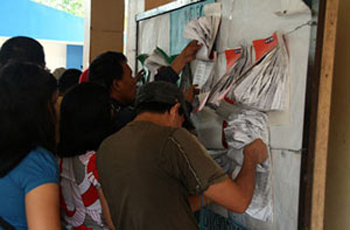 “While it is good that the SC [Supreme Court] has addressed this grave and urgent concern speedily, the youth will remain vigilant and on guard until ‘No Bio, No Boto’ is declared unconstitutional with finality.”

MANILA — The Supreme Court has issued a temporary restraining order (TRO) on the mandatory biometric voter registration scheme also known as “No Bio, No Boto,” on Tuesday, Dec. 1.

The TRO is effective immediately and will continue until further orders from the Court directing the Commission on Elections (Comelec) to “desist from deactivating registered voters without biometric information.”

The order was welcomed by the Kabataan Partylist who filed the petition for certiorari and prohibition last week, Nov. 25.

The SC also required the Comelec and the Solicitor General to submit its comment within a non-extendible period of 10 days from notice.

“We welcome the issuance of a TRO against the ‘No Bio, No Boto’ policy as the TRO is an immediate relief for over three million registered voters who stand to illegally lose their right of suffrage in the May 9, 2016 national and local elections without the benefit of due process due to this patently unconstitutional scheme,” said Kabataan Partylist Rep. Terry Ridon.

In the No Bio, No Boto policy, old and new voters who do not have biometrics will not be allowed to vote. Under the biometric system, voter’s information including picture, fingerprint, and signature are recorded on the Comelec database.

According to the Comelec, the No Bio, No Boto is a condition under Republic Act 10367, or An Act Providing for Mandatory Biometrics Voter Registration, promulgated on June 26, 2013.

The Kabataan Partylist and its petitioners argued that RA 10367 and its implementing regulations are unconstitutional as it violates Section 1, Article V of the Constitution which guarantees Filipino citizens not under the age of 18, the right to vote.

“In contravention of the above-stated constitutional provision, Republic Act 10367 and its implementing regulations imposed an additional substantive requirement for all voters, both old and new registrants, to submit for mandatory biometrics validation or risk being deactivated or removed from the precinct book of voters, thus effectively barring them from the exercise of their right to vote,” the petitioners said.

“While it is good that the SC has addressed this grave and urgent concern speedily, the youth will remain vigilant and on guard until ‘No Bio, No Boto’ is declared unconstitutional with finality,” Ridon said.

“Biometrics validation also gravely violates due process as it an unreasonable deprivation of the constitutional right to vote for millions of Filipinos who have failed to register their biometric information despite existing and active registration – in effect a voter’s re-registration – for various reasons whether personal or institutional,” the petitioners added.