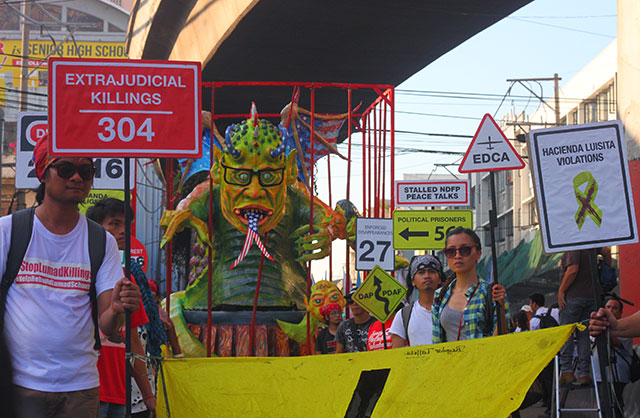 “People are being killed, tortured, arrested and detained. To the regime, the Filipino people’s resistance is a stumbling block to its brand of peace and development, and they must be punished.”

Karapatan Secretary General Cristina Palabay said that under Aquino, the people experienced various forms of violations — from socio-economic rights to civil and political rights, as his regime remains subservient to the dictates of the “number one terrorist in the world — the United States.”

Citing the cases of forcible evacuation of Lumad from their resource-rich ancestral land, Palabay said Aquino’s tuwid na daan (righteous path) is a path soaked with blood. She said the Aquino regime failed miserably in uplifting the lives of the poor majority of the people, pushing them deeper in dire poverty.

“To top it all, people are being killed, tortured, arrested and detained. To the regime, the Filipino people’s resistance is a stumbling block to its brand of peace and development, and they must be punished,” said Palabay. 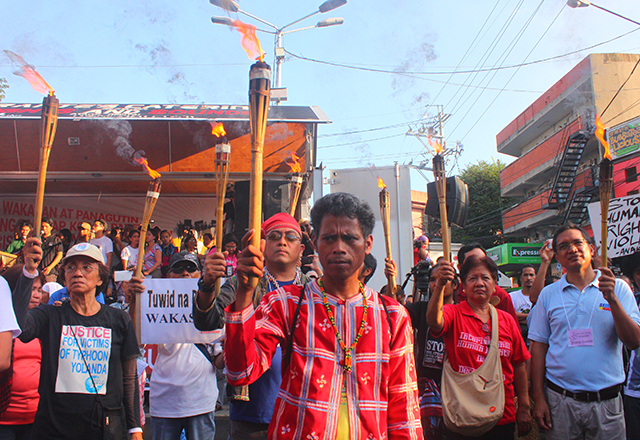 This year’s effigy depicted Aquino as a “monstrous” yellow dragon with a forked tongue of the United States flag, and three smaller heads on its side, representing Budget Secretary Butch Abad, Armed Forces Chief of Staff Lt. Gen. Hernando Irriberi, and Liberal Party standard bearer Mar Roxas. The dragon is in a cage, as a symbol of the desire to see Aquino in jail when he steps out of office. Karapatan said the effigy depicts the regime’s terrorist attacks that weighed down people’s lives and livelihood. It was burned as soon as the protesters reached Mendiola.

Karapatan hit Aquino for his administration’s unchecked rights violations, which was contrary to his June 30, 2010 inaugural speech: “There can be no reconciliation without justice. When we allow crimes to go unpunished, we give content to their occurring over and over again.”

Yet, Palabay said, rights violations happened “over and over again, without let-up and with total brazenness and impunity.” 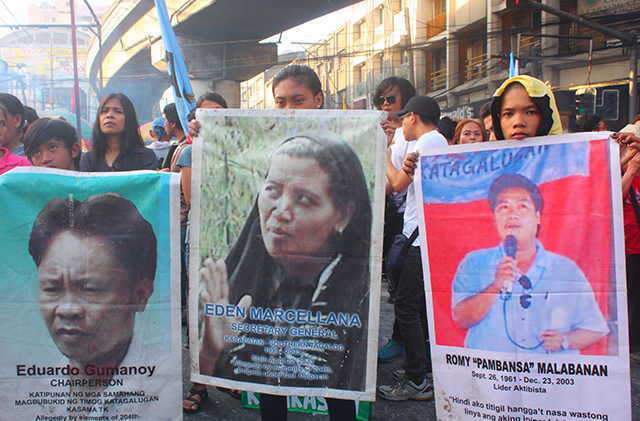 “Sadly, the onslaught has become predictable. From Aquino’s fifth day in power, when Fernando Baldomero fell, the victims of political killings rose to 304, with 324 other victims who survived. From that day up to now, no one has been convicted and brought to justice,” said Palabay.

Children were not spared from the vicious attacks of the state forces, with 28 minors killed by state security forces during military operations, according to the Salinlahi Alliance for Children’s Concerns.

“In most cases, children were deliberately targeted in the pretext that these children were suspected members and/or supporters of armed groups,” said Salinlahi secretary general Kharlo Manano. He said seven children were raped, 23 were tortured and 31 children were falsely branded as child soldiers.

Teddy Casiño, spokesperson of Bagong Alyansang Makabayan (Bayan) said every day, the basic human rights of ordinary Filipinos are being violated: from a passenger who has to endure crowded mass transportation, to a student who was forced to stop his studies because of expensive tuition. 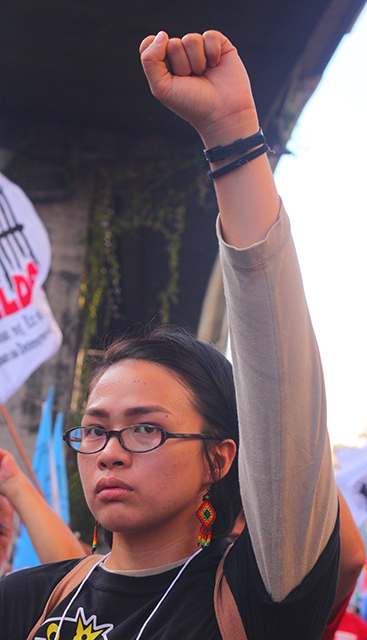 He said as the government implements neoliberal policies and gradually abdicates its obligation to the Filipino people and let private and multinational companies plunder the natural resources and take over the country’s services, the rights of the people would always be violated, especially in a semi-feudal, semi-colonial society like the Philippines.

“At ang malaking nakikinabang dito ay ang US. (It is the US that is benefiting greatly from this.) The US has been the number one violator of human rights not only in the Philippines but in the whole world,” said Casiño.

That is why attacks against the Lumad in the resource rich Mindanao intensified because of foreign interests, said Philippine coordinator to the International League of Peoples’ Struggle, Liza Maza.

She said the Armed Forces of the Philippines has used the “whole-of-nation approach” under the counterinsurgency guide of the US in Afghanistan and Iraq that was copied by the Oplan Bayanihan. Under this, civilians in the community are used against people who resist oppression.

“We have seen this in the communities in Mindanao, with the local government ordering the demolition of schools built for Lumad children in the communities, Lumad paramilitary is used against fellow Lumad, and even North Cotabato Congresswoman Nancy Catamco used her power to evict the Lumad from their ancestral land,” said Maza. 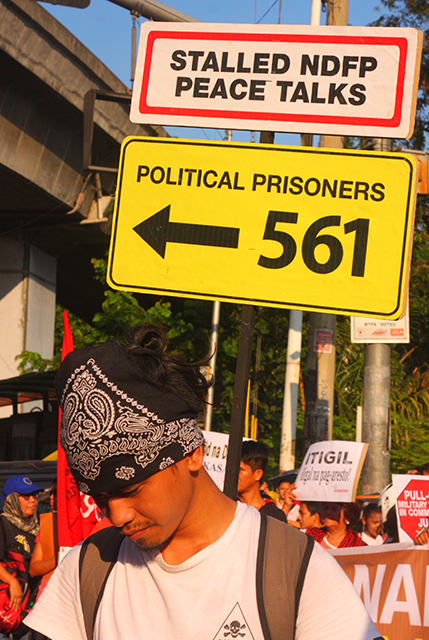 People’s Surge chairperson Dr. Efleda Bautista said Aquino is accountable for government neglect of victims of natural disasters. It has been two years since the typhoon Yolanda wreaked havoc in Eastern Visayas and people are yet to recover, she said. What is more disastrous, she said, is that the government seems to have forgotten about them, even as skeletons of those believed to have perished in the typhoon are still being found.

“Many of those who lost their homes and livelihood still have not been reached by government assistance. That is why we are still here, joining you today because we will not stop demanding for justice,” Bautista said.

Less than a month after the Lumad came from their journey in Manila for Manilakbayan, more than 200 individuals once again evacuated due to militarization in Compostella Valley, said Josephine Pagalan, vice chairperson of indigenous group Kasalo.

Pagalan also vowed that even with the continuous attacks against Lumads, they remain unfazed and will continue to hold Aquino accountable for the deaths of their leaders.

Palabay said as Oplan Bayanihan nears its end, they foresee an escalation of human rights violations. “While we brace ourselves for the regime’s intensification of military activities, we will keep close tabs on Aquino’s injustices and make certain that the real-life Aquino, just as his effigy, ends up in jail,” said Palabay.

Even when the government tried to use all its force against the struggling Filipino people, the mass movement has become even stronger, said Bayan Secretary General Renato Reyes, Jr.

He said the year 2015 was a year of “steadfast struggle and intense action” against Aquino.

“In January, when Pope Francis visited the Philippines, we mobilized and demanded social justice and called for the release of political prisoners. Toward the end of the year, we again mobilized ourselves to support the struggle of our Lumad brothers and sisters who came all the way from Mindanao,” said Reyes.

As they confront issues of the ordinary people, Reyes said, they also have gained victories. 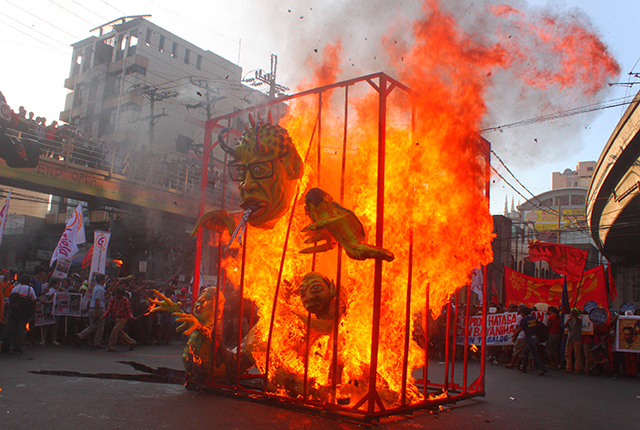 Among them is the release of Andrea Rosal from prison.

He urged the people to not believe false hopes from candidates who promise change as election season nears. He said the solution to the people’s suffering is in the hands of the people themselves.

“Whoever sits in power, let’s challenge them to address the problems such as human rights violations, the economic crisis, and the grievance of an ordinary people. Hindi tayo hihinto hanggang sa ganap na ang tagumpay, (We sill not stop until we achieve victory.) ” Reyes said.