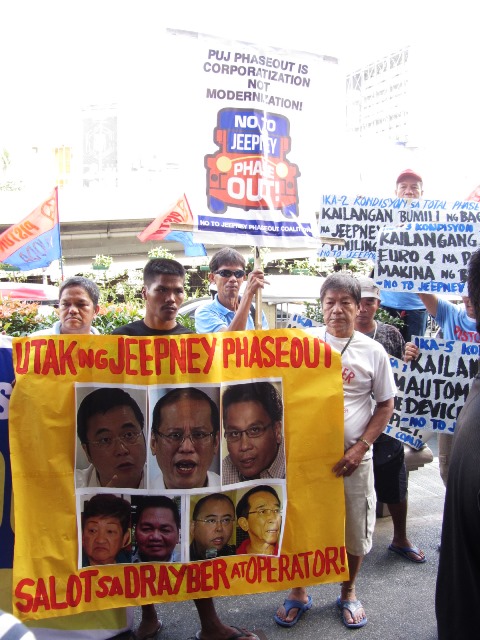 MANILA — Public utility jeepney drivers and operators gathered again and trooped to the office of the Department of Transportation and Communications (DOTC) just a week after they had driven a protest caravan to the gates of Malacañang. Amid glittering Christmas decorations and blooming blood-red poinsettia flowers in front of a private building where the Deparment of Transportation and Communications (DOTC) is holding office, they burned a yellow cardboard bearing pictures of some government leaders. These include DOTC Secretary Joseph Emilio Abaya, President Aquino and LP standard-bearer Mar Roxas. 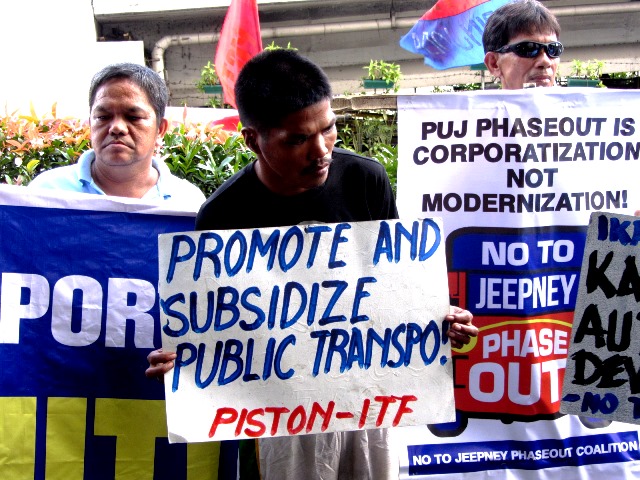 They blame these leaders for what they call as most insensitive, likely corruption-tinged plan to phaseout 15-year jeepneys and replace them with government-vetted imported, finished jeep. The looming phaseout is causing sleepless nights to thousands of long time jeepney drivers and operators who told Bulatlat that the coming new year is bleak for them.

They are demanding the rescinding of the DOTC order to phaseout the jeepney, even as they clarify that they are not against modernization.

Jeepney operators said their jeepneys are still road-worthy, and in good state of maintenance. They bucked the DOTC justification for its ordered phaseout. The drivers also said news that seem to ‘clarify’ or ally drivers’ fears concerning the phaseout are “mere PR” the DOTC as saying only to the media. “It has not rescinded its order yet,” said George San Mateo, national chairperson of Piston.

“It’s not modernization but corporatization of public utility jeeps they’re really after,” said George San Mateo, president of Pagkakaisa ng mga Tsuper at Operator Nationwide (PISTON) and one of the conveners of No To Jeepney Phaseout Coalition.

The week before, when they gathered jeepney operators from Metro Manila, they have made clear that they are not against modernization. That in fact, that’s exactly what they also want for the jeepney and for the comfort of riders and improvement of mass transportation. What they are opposed to, they emphasized, is the forcible entry of corporate control of jeepneys, and the further entrenchment of import-dependent jeepney.

They are also asking instead for government subsidy to allow Filipino jeepney assemblers to modernize the jeepney.
(Text and Photos by M. Salamat)