MANILA – They have waited for decades for an apology that may never come, but they have not given up. They hope that nobody will again suffer what they went through.

Under the blistering sun on Wednesday,Jan. 27, the lolas (grandmothers) belonging to the group Lila Pilipina stood for more than an hour at the Chino Roces bridge (former Mendiola bridge) urging President Aquino to tell Empreror Akihito to issue a public apology and give reparation to all “comfort women.”

“Comfort women” were teenage girls, some even as young as 11, who were abducted, detained and systematically raped by soldiers of the Japanese Imperial Army inside their barracks during the Japanese occupation in World War II.

Narcisa Claveria, 85, wiped her tears as she addressed fellow protesters on how previous administrations up to the present have ignored the call for justice for Filipino comfort women.

She said they came out and told their harrowing real life stories during the World War II. While many have listened, the government still has no action. She said now is the opportune time for Aquino to end their sufferings. “Ano ba, Mister President, wala ka bang ngipin?” ( Mister President, don’t you have any backbone?) she said.

She also urged Aquino to reject the proposed Philippines-Japan Visiting Forces Agreement (VFA) as this would result to another generation of comfort women.

Rechilda Extremadura, Lila Pilipina’s executive director said that during the 1990s, some 1,000 lolas came forward to demand justice. Now there are only five active lolas who are strong enough to endure the heat of the sun and stand in protests to continue their call. 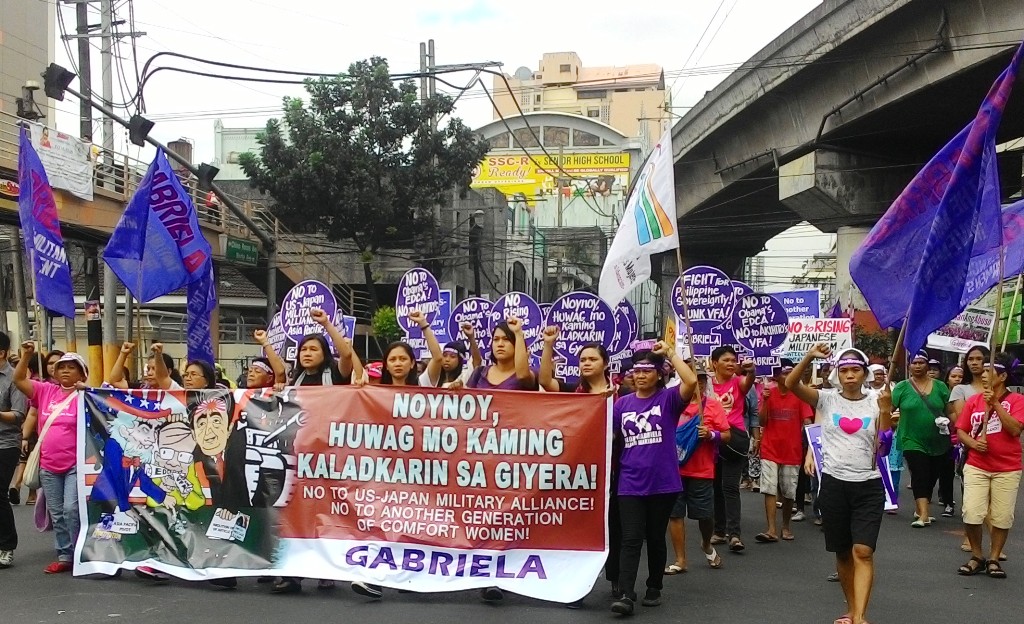 Lola Narcisa said she cries because of the injustice they continue to suffer. But her tears do not weaken her in anyway but further strengthen her.
“There is no reason to lose hope. Even if we die, we have children and our children have also pledged to continue our fight,” she told Bulatlat.

Lila Pilipina was joined by women’s group Gabriela and other sectoral groups which oppose the proposed PH-Japan VFA, which, they said, was the purpose of Emperor Akihito’s state visit. Gabriela highlighted the issue of comfort women and the growing military alliance between the US and Japan in the Asia-Pacific.

Wednesday’s protest is a kick-off event towards International Women’s Day.

“The comfort women system employed by Japan in World War II is no different from the systemic prostitution employed by the US in areas where they are deployed by virtue of the Visiting Forces Agreement (VFA),” said Gabriela secretary general, Joms Salvador.

She said with a VFA with Japan in the offing, the same methods of using women in sexual recreation of troops could be employed.

“Emperor Akihito’s state visit, prompting the Visiting Forces Agreement between Japan and the Philippines, betrays Japan’s real intentions to bully Asia militarily. We refuse to buy his pitch as a pacifist heir to his father’s bloody rampage in the Pacific war that left more than one million dead Filipinos,” said Gabriela Women’s Party Representative Luzviminda Ilagan.

Ilagan said the visit served as “window dressing to sweeten the aggressive moves by the United States and Japan to build military might in the Pacific as a counterweight to China’s expansionism.”

‘When will we attain justice?’

Salvador said Aquino did not even raise the demands of the comfort women in his meetings with Japan’s Prime Minister Shinzo Abe and also with Akihito in his state visit in Japan last year.

“Aquino has repeatedly neglected to make representation in countless meetings with Japanese officials. Though we doubt that Aquino will bring up the issue with the Emperor, the Emperor could bring up the issue himself and Aquino should by all means take the opportunity to demand justice in behalf of Filipino comfort women,” Salvador said.

In Congress, Ilagan said progressive lawmakers have pushed for measures to help the lolas attain justice. They filed House Resolution 2618 which gives policy recommendations on how the Philippine government can support the Filipino comfort women’s appeals for acknowledgement, apology and reparations from the Japanese government. She said the lolas are not beggars who are asking for justice and reparation, they demand it. 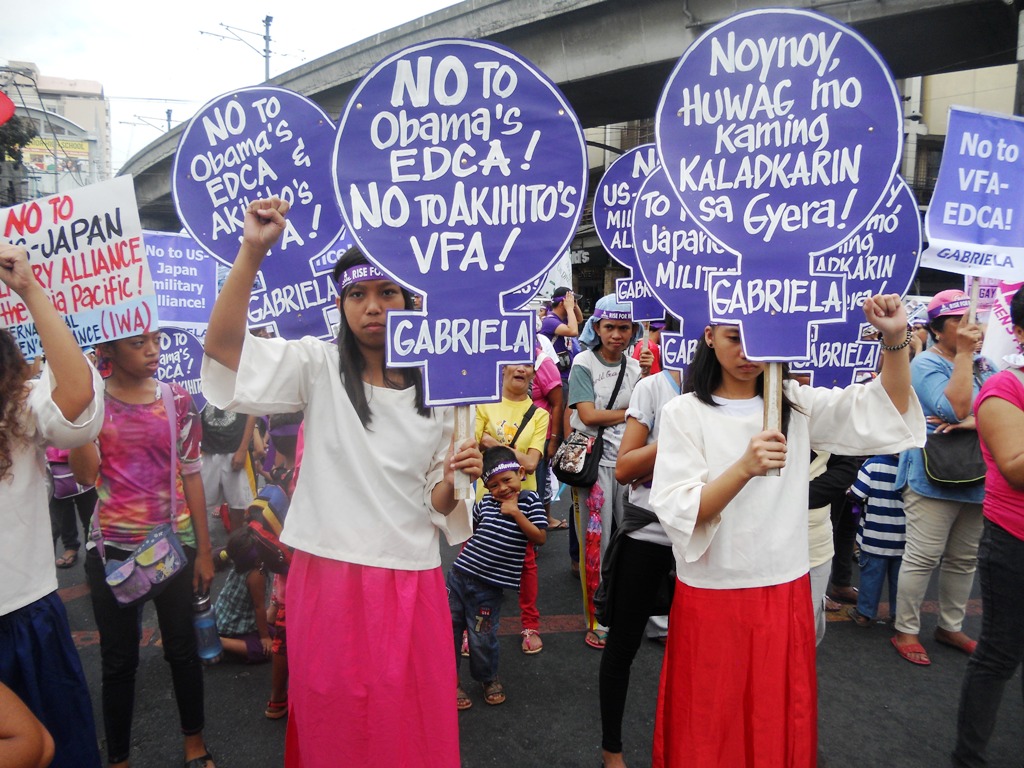 “When they came forward they were 1,000. Now some of them have died and only a few of them are alive up to now. Are we going to wait for their deaths without justice?” Ilagan said during the program.

Ilagan scored Aquino for refusing to use the visit as a platform to raise the concerns of the comfort women with the Emperor who is touring shrines and monuments to the war dead, creating an image in media and academe about his pacifism and “deep remorse.”

“Deep remorse as a personal sentiment by the Emperor will never be accepted by the war victims as official apology. Worse, it could all be a publicity stunt to mask moves by the Japanese Prime Minister Shinzo Abe abetted by US President Barack Obama to remove Japan’s anti-war constitutional provision and boost military missions abroad. Filipinos should be wary and oppose being dragged into another bloody war and another generation of comfort women,” Ilagan said.