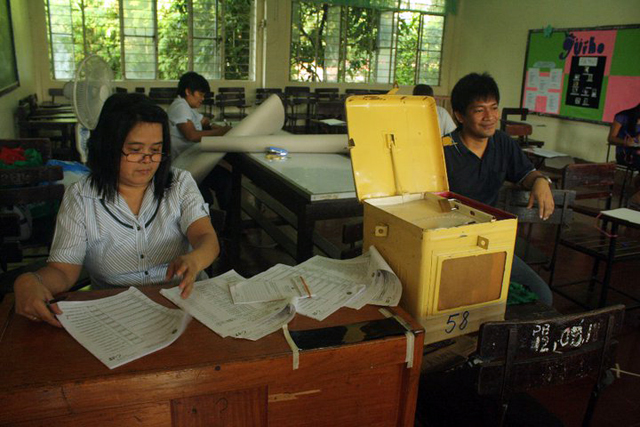 “We dedicate the passage of this law to the memory of Filomena Tatlonghari, Nellie Banaag, and other teachers who gave their lives while serving in elections.”

MANILA – This year, public school teachers may soon have a choice whether or not to serve as Board of Elections Inspectors, as Congress passed the Election Service Reform Act (ESRA) yesterday, Jan. 27.

ACT Teachers Party-list Rep. Antonio Tinio, the principal author of ESRA, hailed the passage of the bill, as the House of Representatives adopted the amendments made by the Senate. The ESRA now only needs to be signed into law by President Aquino.

The ESRA makes election service voluntary for public school teachers and other citizens. It also increases the honoraria for poll workers, and mandates benefits, such as medical and legal assistance, among others.

Although serving in election will be voluntary once the bill is enacted, Tinio anticipates that it will not result to a shortage of election workers.

“Considering the increase in honoraria and the solid package of benefits and legal assistance, teachers opting out of election service will be the exception, rather than the rule. Teachers will continue to serve in the overwhelming majority of polling precincts nationwide, and they will even do a better job,” Tinio said in a statement.

Under the Congress-approved bill, election service shall be performed by public school teachers on a voluntary basis. In case of a lack of public school teachers, the Commission on Elections may appoint the following, in the order of preference: private school teachers, national government employees, excluding military personnel; members of COMELEC-accredited citizens’ arms; and any qualified registered voter with no partisan political affiliation. Philippine National Police personnel shall be appointed as a last resort if no other qualified voter is willing to serve.

The bill also mandates COMELEC, within 30 days of the law’s effectivity, to determine if there is still material time to implement non-compulsory election service in the 2016 national and local elections. Otherwise, it will take effect in the next polls in 2019.

Tinio said this is a historic victory for public school teachers, who have long clamored to make election service voluntary instead of compulsory.
“While teachers have discharged the burden of obligatory election service well, their ranks have also paid the price. We dedicate the passage of this law to the memory of Filomena Tatlonghari, Nellie Banaag, and other teachers who gave their lives while serving in elections,” said Tinio.

Tatlonghari was killed in a ballot box-snatching incident in Mabini, Batangas in 1995, while Banaag died when her school was burned down by armed men during the 2007 elections.

He also lauded the efforts of various teachers’ groups, as well as the Legal Network for Truthful Elections (Lente) and the Center for Political Economy, Foundation for Economic Freedom in campaigning for the passage of ESRA.

He urged President Aquino to sign the measure as soon as possible.