You Are Here: Home → 2016 → January → 29 → Another activist assaulted in Compostela Valley

Another activist assaulted in Compostela Valley 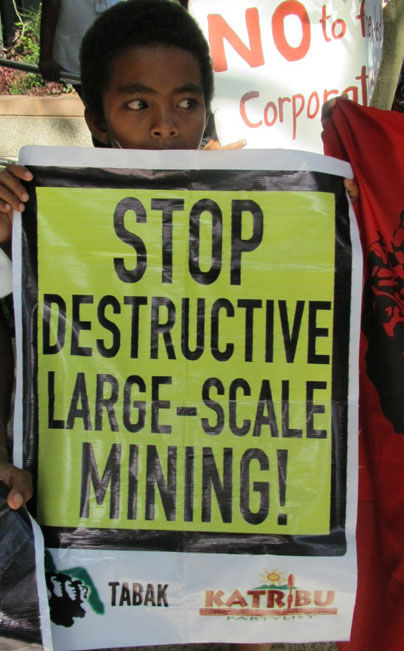 Alex Josol is the second victim in two days to be attacked in Pantukan town, and a “Palparan battalion” is suspected to be behind it.

MANILA – A progressive leader was assaulted by suspected soldiers in Kingking village, Pantukan in Compostela Valley province, the second anti-large-scale mining activist to be attacked in the area in two days.

Alex Josol, 46, is in critical condition in a hospital after he was beaten up by suspected members of the Philippine Army’s 46th Infantry Battalion on Jan. 28. Josol is the chairperson of Indug Kautawan, the organization of survivors of Typhoon Pablo (Bopha) in the area.

First to be attacked was Teresita “Bebing” Navacilla, 60, who was shot on Jan. 27, 8:30 p.m. by suspected state security forces, while tending her store. Two bullets grazed her in the head and nape, and she remains in critical condition as of this writing.

Environmentalist group Panalipdan (Defend)-Southern Mindanao said the two leaders were targeted because of their stand against the Kingking Copper and Gold project, a venture of the National Development Corporation (Nadecor) and the Canadian mining company St. Augustine Gold & Copper Ltd.

Nadecor recently got a government permit to develop and operate open-pit mining, covering some 1,700 hectares in the area.

“Both Josol and Navacilla are small-scale miners in Pantukan, community leaders who are staunch opponents of the aggressive landgrabbing of Nadecor-St. Augustine mining company. They are also active in exposing the series of human rights violations committed by 46th Infantry Battalion, which are protectors of the large-scale mining project,”said Panalipdan in a Facebook post.

Human rights group Karapatan-Southern Mindanao also suspected the involvement of the 46th IB, which they said has been targeting small-scale miners, human rights leaders, progressive farmers and Lumád of the Mansaka tribe who oppose the entry of the big mining company.

Hanimay Suazo, Karapatan-SMR secretary-general said soldiers of the 46th IB “have been on a rampage in Pantukan lately, arresting innocent civilians and portraying them as members of the New People’s Army (NPA).”

Suazo called the military presence in Pantukan a “manifestation of economic plunder, resulting to militarization of otherwise peaceful civilian communities.”

“The 46th IB was originally a Palparan battalion operating in Northern Samar. It was assigned in Maguindanao before finally being deployed to Pantukan under the 10th Infantry Division last 2014,” Suazo said.

The violent attacks and legal offensives against anti-mining activists in Compostela province have been relentless, she said.

Early this year, Renante Mantos of Hugpong sa Mag-uuma sa Walog Compostela (Assembly of Farmers in Compostela Valley, or Humawac) was charged with trumped-up cases of serious illegal detention of his own neighbors. Suazo said 71st IB soldiers are suspected to be behind the charges.

Suazo also cited two strafing incidents in 2015 on the home of Isabello Tindasan, leader of the Compostela Farmer’s Association in Compostela town, which was suspected to be perpetrated by soldiers of the 66th IB. Tindasan, who survived the attack, are among those resisting the entry of Cojuangco-owned large-scale mining, the Agusan Petroleum Mining Company.

This January, three activists had been killed in Southern Mindanao, all of them in Davao Oriental province. A fourth victim, a peasant leader, was killed in Negros Oriental.