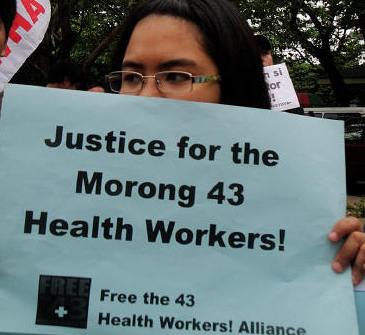 “How can they turn a blind eye to what we went through? It has been six long years. The whole world knows what happened to us. But not the Ombudsman apparently.”

MANILA – It has been six years but Mercy Castro, one of the 43 health workers illegally arrested, tortured and detained in 2010, still takes prescribed medication for depression and anxiety. She still looks back at those dark days with apprehension.

“I was blindfolded. They brought me to what seemed like an open space. All I could here is flowing water nearby. I was surrounded with men and they were laughing at me. They said they will bring me somewhere else if I do not admit that I am an NPA (New People’s Army). They said they know where my family is and threatened that they will kill them,” Castro told Bulatlat.

It was in prison that Castro learned she was pregnant. She gave birth while in detention.

“The soldiers made us wear diapers because they said there were too many of us and we kept going to the toilet to pee. I contracted UTI and then, I was tested pregnant,” she added.

The 43 health workers, dubbed “Morong 43,” filed charges of torture and robbery before the Office of the Ombudsman against then President Gloria Macapagal-Arroyo and ranking military officers. The Ombudsman junked the charges in its resolution dated Oct. 26, 2015, saying it found no sufficient evidence to establish probable cause that the respondents violated Republic Act 9745, or the Anti-Torture Act.

Instead, the Ombudsman only found probable cause to indict several ranking military officers and soldiers for depriving complainants of their right to counsel, which is a violation of a detainee’s rights.

She asked, “How can they turn a blind eye to what we went through? It has been six long years. The whole world knows what happened to us. But not the Ombudsman apparently.”

Amid strong local and international clamor for their freedom, President Aquino ordered the charges dropped against the Morong 43.

In its resolution, the Office of the Ombudsman argued that the medical reports of the complainants “do not conclude that they were subjected to physical or mental torture.” As an example, it cited Dr. Merry Clamor’s report that her blood pressure was 151/117 and has a normal and regular heart and respiratory rate.

“If complainants were physically tortured, the bruises, swellings, lacerations, and wounds would have been obvious at the time of the examination considering that five days have elapsed from the date of arrest,” the resolution read.

A group of volunteer doctors, according to the resolution, conducted the medical examination of the 43 health workers on Feb. 11, 2010, five days after their arrest.

Dr. Alex Montes, also one of the Morong 43, said the psychological torture they underwent would not leave physical evidence.

“We were handcuffed for several hours. We were blindfolded. There was a time when I felt they were electrocuting me. I lost consciousness. When I woke up, I could hardly stand up. I could hardly feel my legs,” he recalled.

Montes said there was a time when he was blindfolded and brought to a nearby creek. They poked his chest with a stick while threatening to push him down the creek if he does not admit that he is an NPA. Like Castro, the soldiers warned him that they know his family’s address and that they could hurt or kill them.

“What kind of evidence do they want?” he asked exasperatedly.

The Anti-Torture Act of 2009 explicitly listed forms of mental and psychological torture, such as blindfolding, threatening a person or his/her relatives with bodily harm, execution or other wrongful acts, prolonged interrogation, and denial of sleep/rest.

“What is the imprudent resolution trying to say: that there is no torture when State agents threatens you with death at gunpoint, deny you food and sleep through prolonged interrogation, deprive you rest by keeping you bound and blindfolded for 36 straight hours or transfer you from one cell to another at night, gaze and fondle your private parts in a toilet in the presence of laughing men and women in the dead of the night?” said Edre Olalia, secretary general of the Nationa Union of People’s Lawyers (NUPL).

The Ombudsman also cleared all respondents of the robbery charges, as the belongings that were “confiscated” during the arrest were “duly accounted” in the Inventory of Property Seized and Confiscated, dated Feb. 6.

But Montes said most of his belongings were yet to be returned, even though these were “duly accounted” in the military’s inventory.

“They said my cellphone has ‘intel value.’(intelligence value) Anyway, I would not use it anymore as it is already an old model. I would just probably throw it away. Still, it was not returned to me, along with my clothes that I even bought all the way from Cebu,” he said.

Meanwhile, the Ombudsman only found probable cause against now retired Philippine Army Lieutenant Generals Jorge Segovia and Aurelio Baladad and other soldiers for the violations of rights of detainees under Republic Act 7438 for their failure to provide the complainants the right to be assisted by a counsel of their choice.

Threats to reopen the case vs. Morong 43

In a related development, the Quezon City Regional Trial Court Branch 81 has terminated today, Feb. 3, the judicial dispute resolution between six of the Morong 43 who filed civil charges against Arroyo and other ranking military officers involved in their arrest, torture, and illegal detention.

The health workers and the respondents did not reach a settlement. The case would be raffled again to another branch, where the trial would proceed, according to their lawyer Julian Oliva Jr., who is also from NUPL.

However, just as the hearing was about to end, Castro expressed concern over what appeared to be a threat made by one of the military official’s lawyer who warned them that the case against them could be reopened under the next administration.

“He even said that our ‘background’ in the mass movement would be exposed and all our clients as well,” she said.

Montes agreed with Castro and said it was another harassment against them. Last year, Montes and his son Conner were charged with unjust vexation, grave coercion and threat by retired Col. Reuben Espartinez, a delisted pastor who served as chaplain of the Armed Forces of the Philippines. The case has already been dismissed.

Olalia said the Ombudsman resolution contributes to the continuing impunity for rights violations.

He added that this has the “net effect of validating the institutionalized practice of torture and allowing non-accountability especially for those military and police officers who have even been promoted not once, but several times, when this outgoing BS Aquino administration thought nobody was looking.”

In a statement, Dr. Julie Caguiat and Dr. Eleanor Jara, co-convenors of the Justice for Morong 43! Justice for all victims of human rights violations! Alliance, said that by virtue of Arroyo being then commander-in-chief and the principle of command responsibility, “she could have chosen to do what is right and implored swift justice.”

“However, it took 10 long months of torture and incarceration, extending to the presidency of yet another incompetent chief executive, Benigno Aquino III,” Caguiat and Jara said.

The two said the Ombudsman’s resolution sends a distorted message to victims of human rights violations that perpetrators of these crimes can wake up normally everyday “knowing they will never be held accountable in an institution that makes torture part of the day’s work.”