“There is very limited time for substantive discussions.”

MANILA — The official campaign period has started and big media outfits are in a frenzy covering the elections. What has the public gotten so far?

In a forum organized by the Union of Journalists of the Philippines (UJP)-University of the Philippines Diliman chapter, Feb. 12, political science professor Perlita Frago-Marasigan underscored the important role of media during elections.

Marasigan shared her initial assessment of the election coverage. She noted the mass media’s bias for entertainment news, conflict and trivial matters. She cited as an example how the media vigorously reported the ‘slap dare’ between two presidential candidates Mar Roxas and Rodrigo Duterte.

“If you are the voter and this is what you’re getting, what would you do?” Marasigan told the audience composed mostly of mass communication students. 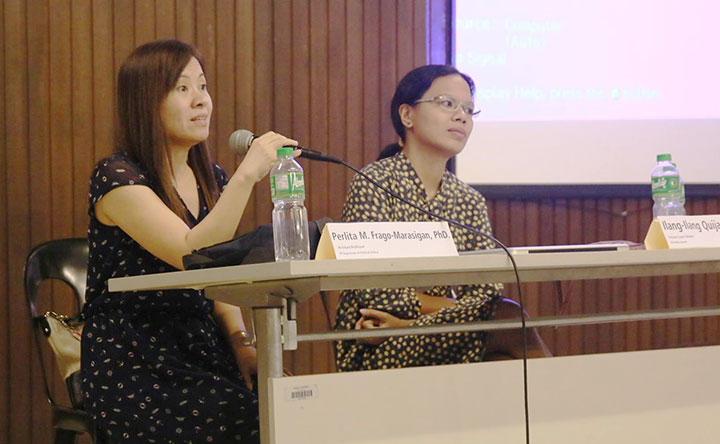 Marasigan lamented how media outfits reported Duterte having a migraine without providing any relevance. She said that while journalists provide the 5Ws and H, what’s missing are the answers to ‘What for?’ or ‘So What?’. In basic journalism, five Ws and H refer to What, Who, When, Where, Why and How.

Marasigan asserted that Philippine election coverage remains to be personality-oriented rather than issue-based. She said that so far, media coverage focuses more on national candidates, specifically presidentiables rather than local candidates and less on party-list groups and senatoriables.

The political science professor for more than 15 years attributed this pitfall to the dominant media’s economic imperatives.

“There is very limited time for substantive discussions,” Marasigan said, noting that programs that provide more time for debates are not easily accessible to the ordinary people.

Marasigan said the media should perform its role as watchdog serving the interest of the public and not the interests of media owners.

She said the media could educate the voters by providing relevant information about the candidates. She suggested doing a comparative analysis of candidates and their platforms, adding she has yet to hear any substantive interviews with presidential candidates.

Marasigan said that while candidates claim they would pursue this and that program, she said, journalists should ask candidates their concrete plans.

On the other hand, alternative media groups, though lacking in resources and reach, have been trying to provide more substantive reports.

Ilang-Ilang Quijano, national council member of Altermidya, a network of alternative media groups in the country, shared some of their best practices in election coverage.

Quijano said alternative media outfits came out with reports on the electoral agenda of the marginalized sectors.

Alternative media groups also looked at the candidates’ promises and track record. These include their platform of governance, how they voted on bills, participation or stand on major political issues or developments and assessment made by marginalized sectors directly affected by any of the candidate’s actions.

Quijano said their colleagues in the provinces wrote stories about political dynasties, which are underreported in national news.

Quijano added Altermidya members provide space for genuine party-list groups which have limited resources for advertisements. Quijano said that while the party-list system should have provided marginalized sectors representation in Congress, rich politicians have been trying to ‘hijack’ the party-list system.

Quijano said they never lose sight of the bigger picture, exposing the elections as “yet another elite-dominated political exercise.”