UP groups call for ‘zero votes for LP’ 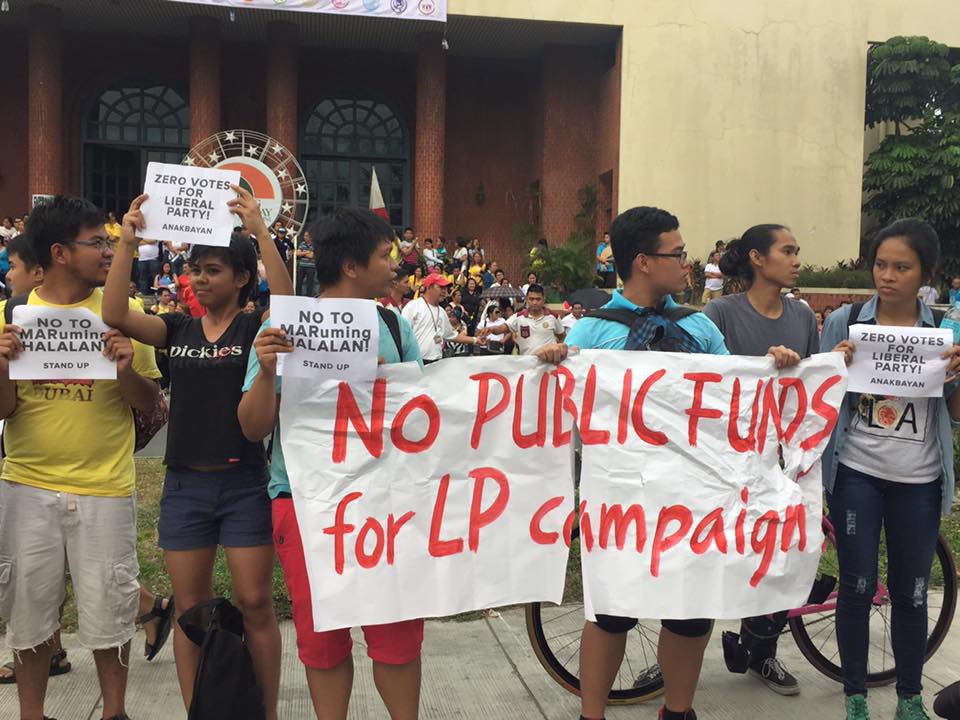 Protesters stormed a government agency event which had Liberal Party candidates as guests.

MANILA — Progressive groups protested against the candidates of Liberal Party who graced an event of the National Anti-Poverty Commission (NAPC) held at the Bahay ng Alumni in the University of the Philippines in Diliman, Quezon City on Wednesday, Feb. 17.

The said event was attended by the LP standard bearer Mar Roxas and vice presidential candidate, Leni Robredo. The NAPC is a government agency under the Office of the President.

The protesters came from the Student Alliance for the Advancement of Democratic Rights in UP (STAND-UP), League of Filipino Students, Anakbayan, Center for Nationalist Studies and employees from the All-UP Academic Employees Union and All UP Workers Alliance.

“Outside of the alumni building, while we were waiting for our other comrades, a group of adults interrogated a student activist and was told not to push through with ‘the plan.’ Yet another student activist was asked by a person who introduced himself as ‘Kit’ and inquired about the “TL” (team leader) for the rally,” said UP Professor Sarah Raymundo in her Facebook post.

Raymundo said a man wearing a NAPC shirt came at the students and tore a protest banner.

“We held a militant protest action in front of the Bahay ng Alumni to assert the people’s struggle against the Aquino regime’s criminal neglect of the Yolanda survivors, the pork barrel system and the presidential pork in the form of DAP, the Mamasapano bloody encounter, the veto of SSS pension, among other horrible things,” Raymundo added.