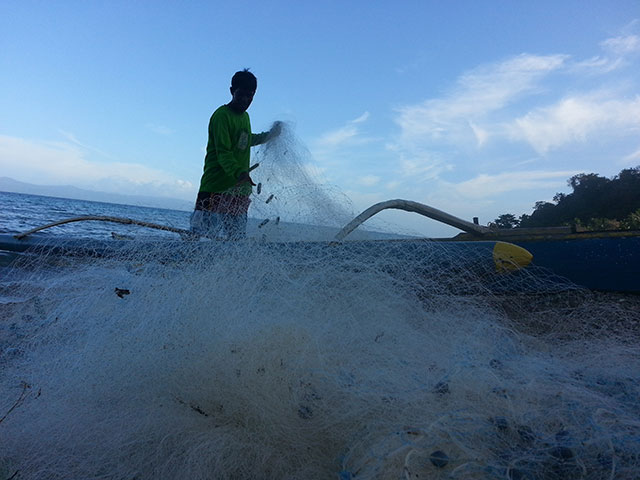 The alliance Pamalakaya presented the Fishers’ Agenda to electoral candidates.

MANILA – An alliance of fisherfolk organizations called for the scrapping of the amended Fisheries Code, as they presented what they called Fishers’ Agenda to this year’s electoral candidates.

The Pambansang Lakas ng Kilusang Mamamalakaya (Pamalakaya) invited national candidates to their forum, Feb. 19 at the University of the Philippines in Diliman, but only Anakpawis partylist officials and a representative of senatorial bet Sherwin Gatchalian came.

Fisherfolk from Muntinlupa, Navotas, Batangas, Cavite, Rizal and Laguna echoed the 12-point demand of the country’s poorest sector, of which the primary is the repeal of the Republic Act 10654, or the Amended Fisheries Code.

In its critique, Pamalakaya said the new law “further impoverishes small fisherfolk who have long been suffering from poverty.”

Fishing without license or permit is prohibited under the law with the following fines:

Section 38 of the law states, “Each commercial fishing vessel shall keep a daily record of fish catch and spoilage, landing points, and quantity and value of fish caught, and off-loaded for transhipment, sale and/ or other disposal… Failure to comply shall result to administrative and penal sanctions.”

The law also penalizes “unregulated fishing,” which refers to fishing activities conduced by vessels without nationality but operated by Filipino and/or Filipino corporation; Philippine flagged fishing vessels operating in areas managed by Regional Fisheries Management Organizations (RFMO) to which the Philippines is not a party to; and, Philippine flagged fishing vessels operating in areas or fish stocks where there are no applicable conservation and management measures.

Pamalakaya said that the law also authorizes local government units to impose additional fees and penalties such as municipal tax, municipal permit, property tax, among others. The group said small fisherfolk in municipal waters have to shell out P2,000 to P5,000 ($42 to $104) per year.

According to the United Nations Food and Agriculture Organization (FAO) profile of the Philippine Fisheries and Aquaculture, more than 1.6 million fishers are involved in municipal waters and 16,500 fishers involved in commercial fishing operations. There are 226, 000 fish and shrimp farmers who are involved in various types of farming of fishes, mollusks, seaweeds and other aquatic organisms.

Pamalakaya said the law only serves the foreign market for fish.

The entry of foreign fishing vessels has been allowed since the passage of the Fisheries Code of 1998.

Data from the FAO showed that the value of Philippine exports of fish and fishery products increased from $142 million in 1980 to $1.2 billion in 2013.

Among the major destination of Philippine fish and fishery product exports (in terms of value) percentage share are the United States, 25 percent; Japan, 16 percent; and European countries, according to the 2014 Philippine Fisheries Profile.

Pamalakaya said that with the amended fisheries law’s stringent requirements, small fisherfolk and small and medium commercial fishing vessels are pushed away from the high seas.

Under the law, fishing vessels should have a vessel monitoring system, which small fisherfolk could not afford due to prohibitive cost.

Pamalakaya said that the law “allows the monopoly of high seas” by big fishing firms such as the Frabelle Group of Companies, Ocean and Light Fishing, Mar Fishing Corp. and RBL Fishing Corp.

Besides banning foreign fishing vessels from the country, Pamalakaya is calling for subsidy for small fisherfolk.

A 2014 study by the Center for Environment Concerns (CEC) and Pamalakaya revealed that many of the country’s small-scale fishermen still use backward fishing gears: five to 15 horsepower motorized boats or even paddled boats, and backward methods such as hook and line fishing, manually-deployed nets, among others.

Pamalakaya said that even during times of disasters, fisherfolk receive no substantial assistance from government. After supertyphoon Yolanda, for example, fisherfolk from Aklan only got a tube of adhesive, some pieces of plywood and few kilos of nails from the government.

The alliance of 43 provincial fisherfolk groups also reiterated its call for an end to reclamation projects such as the 123-billion Laguna Lakeshore Expressway Dike (LLEDP).

Pamalakaya estimates that about four million fishermen and urban poor families in Los Banos, Laguna, Muntinlupa and Taguig will be affected by the project.

The group also demanded a stop to black sand mining. According to environmentalist group Kalikasan-People’s Network for the Environment, “black sand mining operations contributed to the depletion of fisheries, salt water and chemical intrusion into the freshwater table, and worsened flooding in coastal and riverside communities.”

In a fact-finding mission in September 2015, Pamalakaya said Chinese aggression resulted in loss of income of fisherfolk in Pangasinan and Zambales.

Pamalakaya also called on the Philippine government to hold US troops accountable for the grounding of Tubbataha reef. Palawan fishermen have been barred from getting near the reef. https://www.bulatlat.com/2013/02/05/impact-of-damage-to-tubbataha-by-us-navy-ship-more-than-what-is-being-reported-groups/

After listening to the Fishers’ Agenda, Anakpawis former representative Rafael Mariano said the partylist will continue to fight for the interest of fisherfolk.

Anakpawis, a long-time ally of Pamalakaya, opposed the Amended Fisheries Code and called for several Congressional investigations on the issues of small fisherfolk.

Meanwhile, David Yap, a representative of Gatchalian, said the senatorial candidate would support Pamalakaya’s call for the repeal of the Amended Fisheries Code.