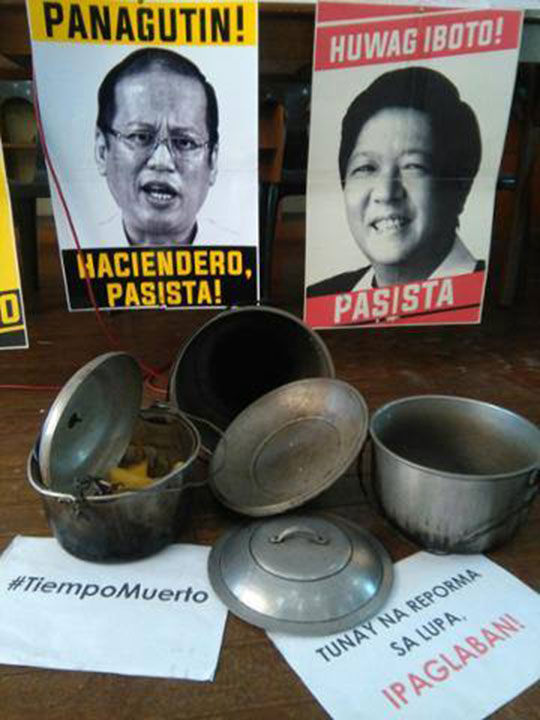 “Both Mar and Bongbong are despicable representatives of everything that is wrong and rotten in the circus called the Philippine Elections.”

MANILA – Agricultural workers are campaigning against two national candidates who belong to the landlord class.

Members of the national federation Unyon ng mga Manggagawa sa Agrikultura (UMA) and the National Federation of Sugar Workers (NFSW) warned the voting public of perennial “tiempo muerto” if candidates they deem as “the most despotic ‘haciendero’ brats and fascist heirs” dominate the coming May national elections.

“Tiempo Muerto” refers to the dreaded dead season in the sugarcane industry after planting sugarcane and before harvesting season when farmworkers are left without any source of income for three to six months.

UMA said Roxas is a scion of the landed Roxas-Araneta clan and a professed backer of sugar barons in Negros island. The groups accused Mar’s family of being involved in land grabbing activities in San Jose del Monte, Bulacan and in Mascap, Rodriguez, Rizal.

Meanwhile, agricultural workers describe Bongbong as “the unrepentant apologist of the fascist dictator Ferdinand Marcos who aims to distort the people’s memory of the martial law regime from 1972 to 1986.” The groups reminded the public of the gross human rights violations committed during martial law, including the infamous massacre of hacienda workers in Escalante, Negros in 1985.

“Being anti-Marcos does not necessarily mean that one is pro-Aquino or pro-Daang Matuwid and pro-Roxas. Both Mar and Bongbong are despicable representatives of everything that is wrong and rotten in the circus called the ‘Philippine Elections,”’ Danilo Ramos, UMA secretary general, said.

The groups challenged other candidates to heed and adhere to the agricultural workers’ electoral agenda.

According to government estimates, there are 700,000 sugar workers in the country with five million dependents.

NFSW and UMA member organizations and advocates representing bioethanol and sugar-producing provinces Isabela in Northern Luzon and Bukidnon in Mindanao came up with their electoral agenda.

Foremost among their demands is the passage of the Genuine Agrarian Reform Bill (GARB) authored in the 16th Congress by the Anakpawis Partylist and Makabayan senatorial candidate Neri Colmenares. In particular, agricultural workers call for the junking of all schemes exempting vast landholdings from agrarian reform such as the stock distribution option (SDO), various Agribusiness Venture Arrangements (AVA) like leaseback, contract growing, corporative scheme; sugar block farming and the illicit and rampant ‘aryendo’ or leaseback scheme.

In Bukidnon, meanwhile, the federation said the rates range from P279 ($6.3) to P294 ($6.4) daily but the real wage of male workers in the province is P100 ($2.3) per day, while their female counterparts get only P91 ($2). Real wages refer to wages adjusted for inflation or wages in terms of the amount of goods and services that can be bought.

The groups also want a stop to the expansion of agricultural plantations controlled by big local landlords and foreign corporations and an end to liberalization of agriculture.

They also called for a stop to militarization, political killings and criminalization of agrarian disputes. They are calling for the release of all political prisoners including peace consultants of the National Democratic Front (NDF) and for the resumption of peace talks.

UMA also led the formation of Tiempo Muerto media network, which will closely monitor the pronouncements of Roxas and Bongbong on their platform and their commitment for the rights and welfare of sugar workers. Tiempo Muerto media monitors will also be active in other sugar-producing areas such as Isabela, Tarlac, Batangas and Bukidnon.

UMA encouraged journalists and alternative media groups to use its official hashtag #TiempoMuerto when sharing content on farmworkers issues and news on the sugar and bioethanol industry online.