The National Conference of Small Coconut Farmers presented a seven-point proposal on the distribution of the coco levy funds.

The National Conference of Small Coconut Farmers called on presidentiables to recover the 20-percent block of coco levy fund shares in San Miguel Corporation (SMC) of Eduardo “Danding” Cojuangco Jr. and distribute the rest of coco levy fund directly to small coconut farmers in the form of cash and social benefits.

Rafael Mariano, chairperson of Kilusang Magbubukid ng Pilipinas (KMP), said all presidentiables appear resigned and convinced that Cojuangco really owns the 20-percent in SMC that was acquired using the coco levy funds. “This is an insult and betrayal to millions of small coconut farmers,” he said.

The coco levy came from taxes imposed on coconut farmers during the martial law years with the promise of sharing investments and development of the coconut industry.

In its September 4, 2012 final ruling, the Supreme Court upheld that a 31-percent bloc of SMC shares constitutes public money and should be used solely for the benefit of farmers and the industry. The 31 percent shares refers to the Coconut Industry Investment Fund shares in SMC that was reduced to only 24 percent and was already remitted to the national treasury in October 2012 amounting to more than P70 billion (US$ 1.52 billion). 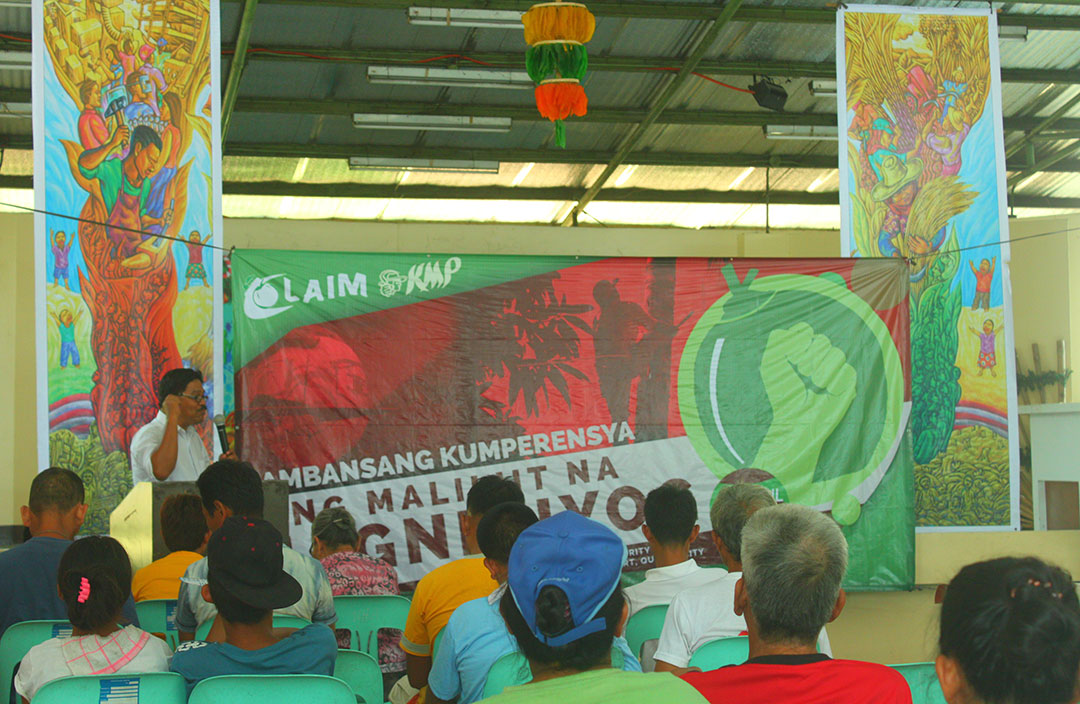 Sixty-five-year-old Edwin Escote said his father died at 87 without reaping the benefits of coco levy.

Like his father, Escote and his wife raised their seven children through copra production. For one hectare of land, Escote said they would earn only P1,000 ($22) for a period of 45 days. He works as a laborer in other copra plantations to augment the family’s meager income.

Escote said he joins other small coconut farmers to demand the return of coco levy funds.

“All the presidentiables are saying that they would return the coco levy to us. I don’t believe in promises. That’s what they told us before and we have been waiting for too long,” Escote told Bulatlat.

On June 30 of the same year, the high court issued a temporary restraining order on the said EOs.

KMP earlier said that privatization of coco levy funds and assets “would merely resume the cycle of big business and crony plunder of these multi-billion funds and properties.”

Small coconut farmers maintained that they should be the ones to decide on the distribution and utilization of coco levy funds and assets.

“The litmus test on all presidential candidates is the direct cash distribution of the coco levy money to small coconut farmers and hold Cojuangco accountable for plunder of the funds,” Mariano said.

The conference presented a seven-point proposal on the distribution of the coco levy funds.

3. Small coconut farmers should be the primary beneficiaries of the Fund in the form of cash and other social benefits including but not limited to pension benefits, medical and hospitalization benefits, maternity benefits, and educational assistance including scholarships.

4. Socio-economic programs and projects of small coconut farmers through their recognized organizations/cooperatives shall be financed by the recovered coco levy funds and assets, and the shares and dividends from the investments made from coco levy including assets and corporations (CIIF-Oil Mills Group, 14 Holding Companies, United Coconut Planters’ Bank, Cocolife, etc.).

5. Socio-economic projects initiated by small coconut farmers and their organizations and/or cooperatives financed by the Coconut Farmers’ Fund shall primarily focus on livelihood programs and projects meant to provide additional incomes to small coconut farmers; small and medium-scale coconut enterprises, marketing and trading mechanisms, inventions and innovations of machineries and equipment for the development of high-quality coconut and improvement of local coconut production;

6. All coco levy funds acquired assets, investments, and corporation shall be turned over to the Small Coconut Farmers Council. The SCFC shall directly manage the operations of the CIIF-Oil Mills Group, 14 Holding Companies, United Coconut Planters’ Bank, Cocolife, and other corporations acquired through the coco levy funds for the benefit of small coconut farmers.