People’s scientists give Mar zero on science and tech

Dee Ayroso May 6, 2016 #BeyondElections, Agham for the People

The Advocates of Science and Technology for the People (Agham) based their ranking on nine key issues on Philippine science and technology (S&T) development: research and development, power and energy, mass transport, environment and climate change, education, land reform and agricultural modernization, better internet, S&T worker’s welfare, and national industrialization.

“Santiago scored the highest because of her consistent stand in support of the development of our S&T,” said Feny Cosico, Agham secretary general. 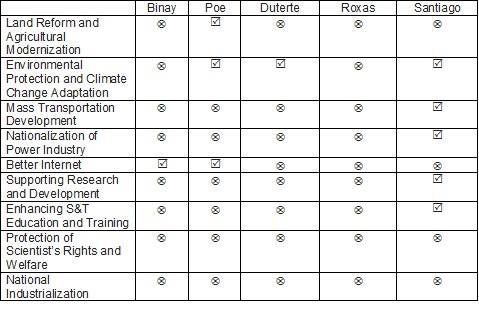 “In fact, she was the only candidate that explicitly promised to allocate one percent of the GDP for research and development through government support unlike other candidates who will rely on the private sector to fund research and development. She also has favorable stands on issues such as the nationalization of our power industry,” Cosico said.

Cosico said they gave Roxas zero on all categories for favoring privatization of strategic industries, and relying on the private sector, which means development of S&T will be for private profits, instead of the advancement of the broad masses’ lives. She added that Roxas “lacks credibility to deliver some of his promises.”

“His administration is known for frequent train glitches and dubious contract deals that rob the Filipino people,” he said.

Cosico said that although the presidential candidates speak of plans to improve “small aspects of our S&T,” none of them offered free land distribution, agricultural modernization and national industrialization which will fundamentally improve the economy and spur S&T development in the country.

“The platforms they present are mere repetitions of the neoliberal policies that the Aquino government ardently pursued,” said Cosico, adding that they do not expect big changes whoever wins, as long as the next administration follows Aquino’s “Tuwid na Daan.”

Another scientist, Engr. Julian Marvick Fua Oliveros, who was one of the Filipino engineers and scientists who created the Philippines’ first micro-satellite Diwata-1, called on candidates to support Filipino scientists.

“The next administration should uphold the rights of engineers and scientists in ensuring that they are protected from being exploited in any scientific undertakings, training and the implementation of service bonds that will undermine their stature as Filipino scientists and engineers,” said Oliveros.