Fabella Hospital, up for rebuilding or commercialization?

“Where will the poor mothers go?”

MANILA — The century-old Dr. Jose Fabella Memorial Hospital is being evicted from its site in Lope De Vega Street in Manila, where it has stood for 65 years. It is the government’s move toward its eventual closure, says critics, who have protested and formed barricades outside the hospital gate since April.

The Department of Health (DOH) said a new Fabella Hospital will open within the DOH compound, also in Manila. Its out-patient department and midwifery school will be relocated to the Lung Center of the Philippines compound in Quezon City.

Despite denials by DOH that the hospital will be abolished, Fabella has become the latest battleground for progressive health workers’ groups that have been waging a war against privatization of government hospitals and health services. It is a fight for the poor majority’s right to health care, they said.

Bulatlat takes a look at Fabella Hospital’s history, budget allocation in recent years, and government efforts to remove the hospital from its site.

The DOH said the old hospital is deteriorating. To back-up their claim, the DOH contracted ESCA Incorporated to conduct a structural investigation.

In its report released on Jan. 12, ESCA Inc. said, “The structural elements of the buildings have been found to have decreased its concrete capacity to a very low value, which makes it difficult for retrofitting or rehabilitation.”

But what has led to its deterioration?

Based on data from the Department of Budget and Management, for a decade, the Fabella Memorial Hospital has received minimal increase in its funds under the budget assigned to the Department of Health (DOH), except for its record-high budget of P1.3 billion ($28 million) in 2014. This year, the hospital was allotted a total of P629 million ($13.6), higher than the P256 million ($5.5 million) budget in 2007. 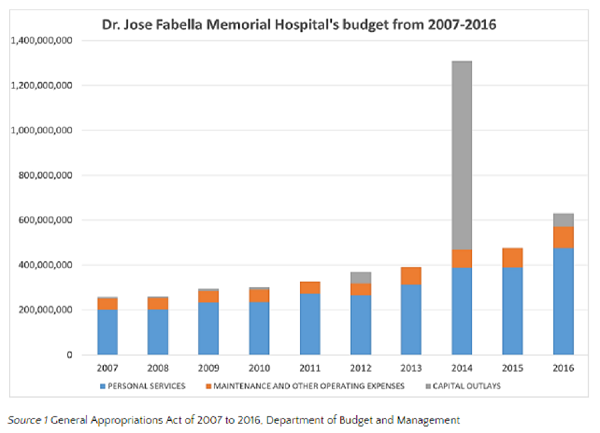 The sudden increase to P840 million ($18.19 million) capital outlay budget in 2014, meanwhile, has been criticized by the Alliance of Health Workers (AHW), which said that it concurred with the Invitation to Bid for the Infrastructure Project for Fabella Hospital (Phase II) by the DOH inside its compound. 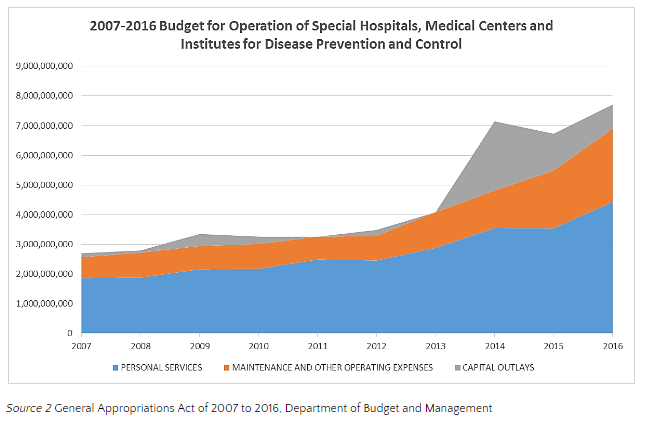 The financial situation of Fabella Hospital has also been reflective of the subsidy received by all 12 special hospitals, medical centers, and institutes under the DOH. These include the Philippine Orthopedic Center and East Avenue Medical Center.

Despite the gradual increase in their budgets over time, few funds were allocated to capital outlay. In 2011 and 2013, there were no capital outlay funds at all.

The AHW doubted the government’s claim that the deteriorating condition of Fabella’s buildings is the reason behind the eviction of the maternity hospital.

The group said that in 2007, the Home Guaranty Corporation (HGC) posted an invitation to submit proposals to develop under a Joint Venture Agreement the Old Bilibid Compound (OBC) Project — a land area of 84,042 square meters, covering the lots of the Manila City Jail, the Fabella Hospital and Central Market.

“The OBC Asset Pool was conveyed to HGC thru a Deed of Assignment and Conveyance executed by the Development Bank of the Philippines on Nov. 16, 2000. The conveyance was made after the HGC paid P1.14 billion ($24 million) to investors of the failed OBC Urban Renewal and Infrastructure Development Project,” the letter read.

The maternity hospital started as a six-bed capacity clinic, then called Maternity House in Sampaloc, Manila. It was founded by then Public Welfare Board Chairman, Dr. Jose Fabella on Nov. 19, 1920.

In 1922, the clinic expanded and put up a pediatric section and a school of midwifery. It had its first 10 graduates of midwives the following year. The Jose Fabella Memorial Hospital School of Midwifery is known to be one of the best performing institutions, as recognized by the Professional Regulation Commission in the Midwife Licensure Examinations.

The control of the clinic was then transferred to the Bureau of Health, and later in 1947 to the Bureau of Hospitals, which is now the Bureau of Medical Services. The School of Midwifery, now a renowned training center, was later on designated as training hospital under the jurisdiction of the Office of the Secretary of Health.

On Feb. 19, 1941, President Manuel L. Quezon issued Administrative Order 140 which exempted the Bilibid hospital and its premises from being utilized for other purpose, as the land will only be used for the maternity hospital. Then in 1951, the Maternity House was transferred to its present location at Lope De Vega street, Sta. Cruz, Manila.

The patients of the hospital increased overtime, which led to its expansion to 700 beds. It is now a national special hospital for obstetrics, gynecology and pediatric cases, with functions for service, education, training, public health and research. Its official website said the Fabella Hospital is primarily a government hospital for charity patients. Its medical service has three major departments: obstetrics, gynecology, and pediatrics.

Fabella is also one of the few hospitals with a Human Milk Bank. It pioneers in implementing the Kangaroo Mother Care in the Philippines, which was proven to lower the low birth weight and risk of mortality among babies.

Uncertainty looms among hospital employees and health professionals in Fabella, but what is even more threatened is the patients’ right to free health services.

Compared to the P1,000 ($21) to P60,000 ($1,300) cost of maternity care in lying-in centers and private hospitals, Fabella sometimes does not charge patients who do not have money, said Fe Trinilla, a nurse supervisor in the hospital for 30 years.