SPECIAL REPORT:
These nightmares in the country’s train system have been present even in the past, but under Aquino, things took a turn for the worse.

MANILA – Six years ago, President Benigno Aquino III promised to create an efficient railway system. But as his term ends on June 30, the public has only seen a series of train breakdowns, lack of coaches, unjustified fare hikes, and privatization schemes.

These nightmares in the country’s train system have been present even in the past, but under Aquino, things took a turn for the worse. Passenger complaints and train accidents became regular news fare, as well as government officials’ insensitive remarks and attempts at downplaying the issue.

There have been more glitches in the Metro Rail Transit (MRT) 3 than the Light Rail Transit (LRT) 1 and 2, from broken railings to defective train doors and escalators. The Advocates of Science & Technology for the People (AGHAM) labelled the MRT-3 five times more dangerous than other trains. The MRT-3 have 3.5 injuries for every 100 million passenger-miles since 2013, while the US trains get 0.7 injuries.

The inexperienced private maintenance providers behind the MRT-3 operations are said to be partly to blame for its underperformance. Accidents escalated when the Department of Transportation and Communications (DOTC) replaced the maintenance provider Sumitomo Corporation with the newcomer PH Trams, which was awarded a contract worth P517 million ($1.2 million) a month from October 2012 to August 2013.

AGHAM said the Built-Lease-Transfer contract the government signed resulted in rising costs and breakdowns in the MRT-3, as this divides the infrastructure between the government and the private sector. Signed in 1996, the government would operate and rent the MRT-3 from the Metro Rail Transit Corporation until 2025.

Amid dissenting opinions on the government’s tie-ups with the private sector, Aquino considered the Public-Private Partnership his flagship program. Under his term, the government granted corporations several project contracts concerning not only infrastructure projects but other basic social services as well. 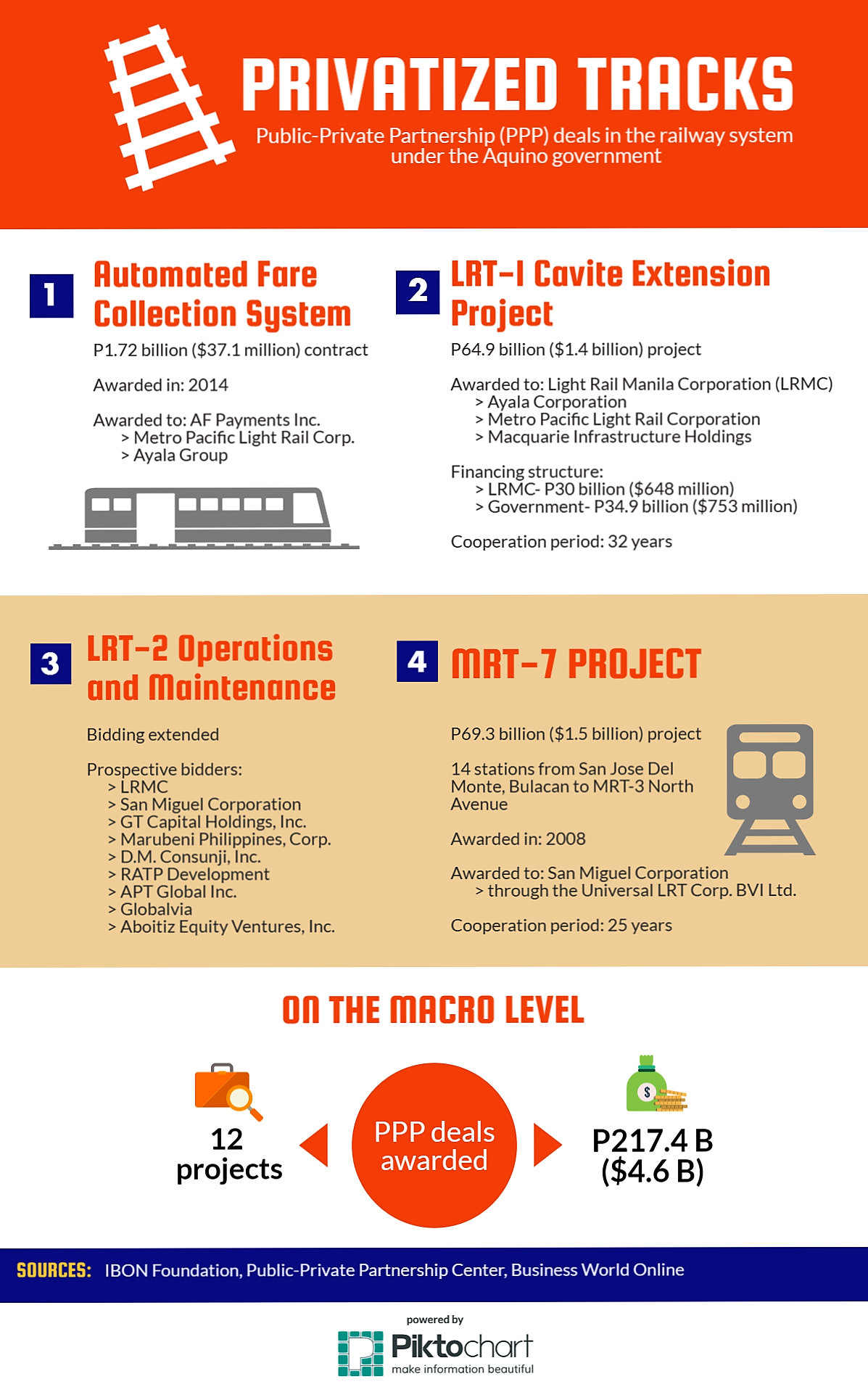 Another move that earned criticism from the public is the government’s move to increase the fare rates of MRT-3 and LRT-1 and 2. It is especially because the P2 billion ($43 million) projected extra revenue from the fare hike does not guarantee optimal capacity of train systems, as stated by the DOTC.

Thus, several progressive groups continue to denounce the mismanagement and neglect of the railway system. Public discontent of the service also manifested through viral memes on social media.

While sectoral groups clamor to hold all officials accountable for the railway system woes, the public has turned its eye on the promises of incoming President Rodrigo Duterte. During his campaign, Duterte promised an additional 30 to 50 coaches to the MRT-3 and the creation of new railway lines traversing Manila to Bicol, Manila to Batangas, and one in Mindanao.

The president-elect has yet to provide a concrete solution, but one option he considers is an agreement with China, which has constructed train systems for other countries.

Here lies the question: will there be change under the incoming Duterte administration? Or will it be another six years of mishaps in the railway system?