Paragas is a testament to the praxis of cultural revolution standing its ground, matching profit accumulation with the accumulation of protest.

This new release from Edge Uyanguren and Tubaw easily stands as one of the movement’s lushest cultural production to date. Its sonic tropes offer a wide variety of pop, reggae, R&B and soul, alternative, and the unmistakable marching tunes of protest music. Lead artist Uyanguren steps back and lets the band breathe with all its jam-band grooves and instrumental prowess in full swing. More so, he ramps up his duties as soloist and back up vocalist in love songs for the motherland and a lover’s most precious one. Taken altogether, all twelve cuts in Paragas develop frisson through concurrent overlaps and juxtapositions between genres and textures.

In the last decade, the progressive movement has been challenged by a heightened attack on human rights, which include but are not limited to extra-judicial killings, enforced disappearances, and the criminalization of dissent through incarceration of activists. The climate of impunity in the country is perpetrated by none other than the Philippine oligarchy. Paragas sings a decade of impunity inflicted on the people by the Macapagal-Arroyo and Cojuanco-Aquino regimes in cahoots with US Imperialism, and does so with utmost persistence, class consciousness, solidarity, and a developed sense of collectivity and organization.

If Paragas seems to defy what we usually think of the revolution, i.e., a rupture in social relations is necessary to unleash the revolutionary power of culture to push beyond its limits, we only have to remind ourselves about the phenomenon of uneven development in postcolonies like the Philippines. Here, too, the uneven development of revolutionary forces begs our understanding of the grains which would historically add up to the pockets of communist consolidation in Mindanao. 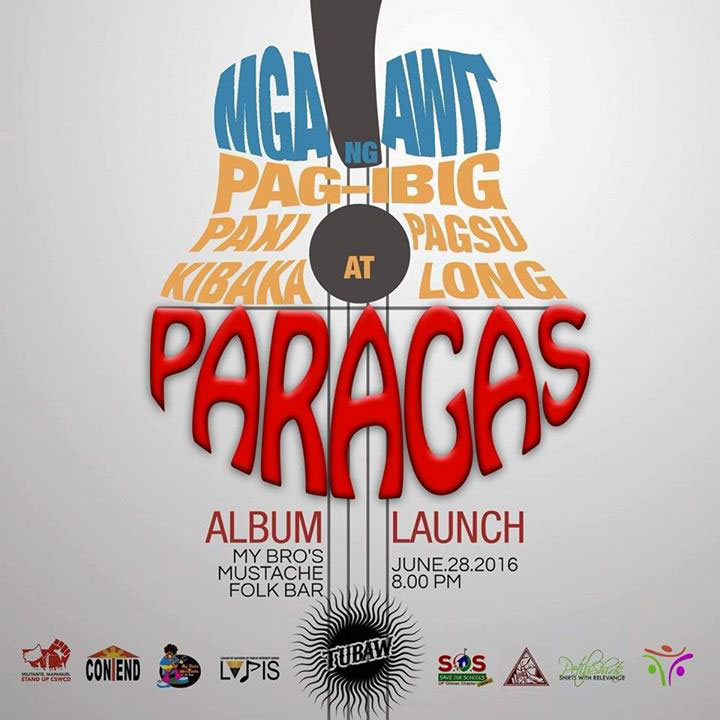 Comrade Edge Uyanguren was born and raised with the humble aspirations of the historical settlers in Davao. But as all life histories develop, Uyanguren’s commitment as a revolutionary cultural worker is also shaped by the climate of discontent, protest, and organized revolution among the peasants, farm workers, miners, Lumad, Moro, and red fighters of Mindanao. It is the same mass movement that brought forth an astounding symbol of authority of the worldwide struggle of the proletariat in the person of communist red fighter of the New People’s Army, Commander Parago to whom Uyanguren and his band Tubaw rightly pay homage through this album.

Tubaw’s Paragas honors the growing wrath and protest of the organized masses whose hopes and loves are keenly aligned with the indelible trace of the proletarian revolution that live deep in the hearts of the people. Lenin speaks of the same trace of the Paris Commune left in the minds of millions, in particular, “the epic of its life and death.” Uyanguren makes music of the heroic struggle of the people’s democratic revolution, the kind that arouses hope and thoughtfully enlists sympathy for national liberation and socialism. The timely release of this album by the comrade from Davao/Mindanao gives us a necessary context to the Duterte Administration’s disposition toward the communist forces.