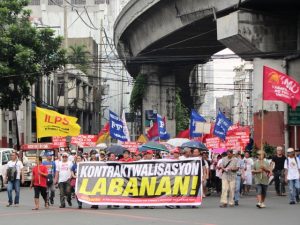 “The administration must have clear and concrete policies that would ban all contractual employment schemes and force capitalists to respect workers’ rights to regular jobs.”

MANILA – The labor center Kilusang Mayo Uno expressed appreciation for President Duterte’s
latest tough talk against employers practicing contractual employment schemes. Duterte
distinguished himself from other presidential candidates last May when, aside from other progressive vows, he led in condemning contractualization.

The KMU offered to work with the Duterte administration in drafting policies that would totally
end contractualization.

“The administration must have clear and concrete policies that would ban all contractual employment schemes and force capitalists to respect workers’ rights to regular jobs,” Jerome Adonis, KMU secretary general, said.

Last month the KMU and some of its regional chapters

It includes scrapping the DOLE Department Order 18-A and ordering the “super-majority” in Congress to certify as urgent the House Bill 556 or the Regular Employment Bill filed by Anakpawis Partylist that would amend the Labor Code and junk its Article 106-109.

Many workers groups criticize contractualization and call for its end. To KMU, for example, it is “a crime that destroys the future of our workers and their families. It violates every basic workers rights, it demeans their dignity as human beings and subjects workers to the worst forms of exploitation,” as Adonis said.

KMU regional chapters reported in their congress last year that in most establishments where they have influence and initiatives in forming unions or alliances, some 7 to 9 out of 10 employed are contractuals.

A government survey, meanwhile, said up to 44 percent of rank and file workers in establishments with 20 or more employees are considered non regular, including contractual but agency-hired workers. Per industry, the ratio is worse as non-regulars outnumber regular employed workers in manufacturing and construction.