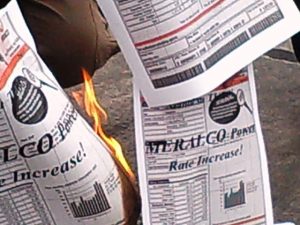 The said over-recovery appeared to result from Meralco’s lower forecast energy sales, which it used as basis in computing the distribution rate being charged to costumers.

Meralco in July 2015 applied for, and received, ERC approval to reduce distribution rate by 0.1883 per kWh as an interim rate starting July 1, 2016.

The ERC brought further reduction in the distribution charges (reducing it by a total of 11 percent) by removing under-recoveries being charged for the Second Regulatory Period (July 2007 to June 2011). The ERC said it removed the allowance for net efficiency, which was embedded in the distribution rates for the Third Regulatory Period (July 2011 to June 2015).

Consumers groups welcomed the rate reduction, but continued to question whether the volunteered rate reduction was sufficient and correct.

According to MSK, the ERC allowed Meralco to recover the amount of under recovery in the Second Regulatory period of July 2007 to June 2011 in the Third Regulatory period from July 2011 to June 30, 2015. With the approved interim rate, the consumers group said Meralco, which should have stopped collecting the amount of under recovery, was allowed to continue collecting it.

In a statement, MSK said there is really no reduction in the basic rate of Meralco from the Third regulatory period July 2011 to June 2015 to the current Fourth Regulatory period of July 2015 to June 2019 as being publicized by Meralco.