You Are Here: Home → 2016 → October → 7 → NDFP demands amnesty for political prisoners as 2nd round of talks begins 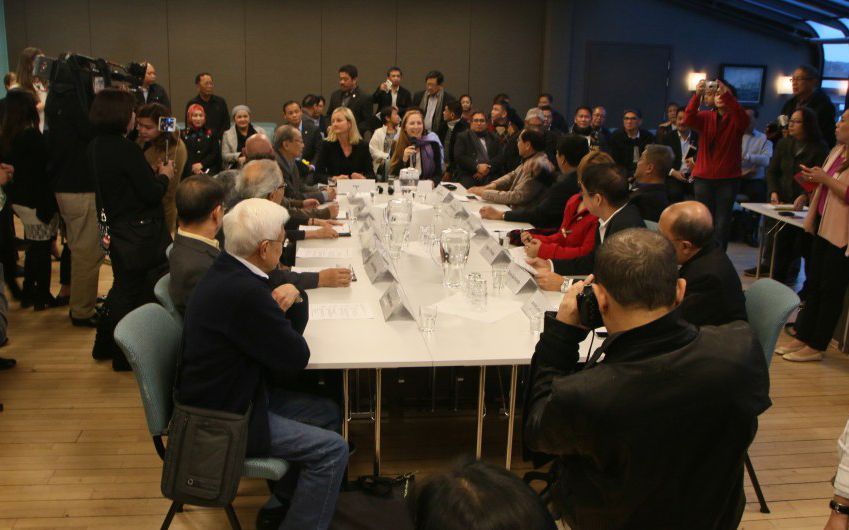 “The most effective method of release (of political prisoners) is through an amnesty proclamation as offered by President Duterte himself.”

Punctuated by a standing ovation by both parties to long-time and recently-resigned NDFP chief negotiator Luis Jalandoni, the opening ceremony was attended by more than a hundred panel members, consultants, staff and observers.

In his opening remarks, newly-appointed NDFP negotiating panel chairperson Fidel Agcaoili demanded for a general amnesty for more than 400 political prisoners as “a matter of justice and compliance with the Joint Agreement on Safety and Immunity Guarantees and the Comprehensive Agreement on Respect for Human Rights and International Humanitarian Law (CARHRIHL).”

Agcaoili recalled GRP President Rodrigo Duterte’s offer of a general amnesty to political prisoners in a meeting on May 16.

“The most effective method of release is through an amnesty proclamation as offered by President Duterte himself,” Agcaoili said.

Agcaoili explained that “the proffered amnesty proclamation pertains to political prisoners and not to a general amnesty that is mutually extended to both Parties in the final settlement of an armed conflict.”

GRP Negotiating Panel chairperson Silvestre Bello III for his part focused on the approval of a joint ceasefire, along with the exchange of draft frameworks and outlines on socio-economic reforms, political and constitutional reforms and end of hostilities and disposition of forces.

The joint ceasefire is being awaited by the public, Bello added.

Members of the media were immediately asked to leave the conference room after the speeches but were not informed of the schedule of the usual briefing after each opening and closing ceremony of the talks.

While Dureza focused on thanking the Royal Norwegian Government, congratulating Agcaoili and introducing the House of Representatives delegation, Sison for his part also talked about the release of political prisoners.

“The release of all political prisoners, in accordance with the CARHRIHL, would also serve as a very big incentive for a stable kind of ceasefire,” Sison said.

In a press statement, the NDFP said that social and economic reforms agenda would be discussed starting on the second day of the talks.

The parties exchanged proposed framework and outline for the Comprehensive Agreement on Social and Economic Reforms (Caser) , the second agenda of the peace negotiations set by The Hague Joint Declaration of 1992.

The NDFP said Caser’s main objectives are agrarian reform and national industrialization; advancement of the rights of exploited, oppressed, discriminated and disadvantaged sectors of society; economic sovereignty; and national patrimony and protect the environment.